Depending on your point of view yesterday I was being nosey or looking to the future. I went to have a look at a new care home that is opening shortly on the outskirts of our village. It is going to offer residential and nursing care for both frail elderly and those with dementia. I had heard that the fees are to be 50% more than those of the home that my mother was a resident in. So I was curious to see what residents will get for that extra £350 a week. But I didn't really get to see it. I had gone on the wrong day. The open day was Sunday. It hasn't taken me long as a rookie retiree to lose track of the date. As there was no one around and the door was open I managed to have a nose around some of the rooms. It looks rather like a five star hotel. However, some of the finishing touches in the bedrooms, such as tables over the beds, are not something that you would expect to find in a five star hotel. Anyway I am hoping that a lot of water will flow under the bridge before we need to seriously think about a care home.

To be honest I am struggling a bit with this retirement game. Things did not get off to a very good start with my mother dying just before I finished worked and husband is still at home cluttering up the cottage. I was pleasantly surprised by the number of cards and letters that I received from friends and family, in response to my mother's death. My mother's generation don't do e-mail and I have had to respond the old fashioned way. Now, I have almost got the spare bedroom clear of my mother's clothes. Most have been distributed to the local charity shops, but before I was able to do that I had to remove the name tapes from them. It just took a couple of snips to remove the name tapes that I had sewn in, but the ones ironed in by the home were a different matter. It was as if they had been set in concrete. I had to resort to using a marker pen to black out her name. Then there was the issue of what to do with Mum's ashes. The undertaker had brought them round and dumped them in the garage next to the ashes from our log fire, which we spread around our roses. I found the idea of having her ashes in the cottage a bit spooky and was not sure what to do with them. Thankfully my brother collected them a few days later. He has plans to scatter them down in Devon.

Well, what else have I been up to? I am slowly getting through the back log of jobs around the cottage and am enjoying being able to spend more time reading, as when I was working a considerable amount of time had to be spent reading my professional journal and keeping myself up to date. I have also managed to spend a bit of time in the garden when the weather has permitted and am looking forward to spending more time out there, now that the days are getting warmer. In an attempt to prevent the days from all blurring into one I have started to go to a class on a Tuesday morning. I reckoned that by doing so I should at least know when it is Tuesday. The topic is flower arranging, which I have done before. The teacher is the same. The venue, time of day and classmates are different and I was surprised to find that one of them lives in the neighbouring village. Today we did a Continental Parallel arrangement, which I find difficult to do. Also I am not a great fan of modern arrangements but I am quite pleased with this morning's effort. 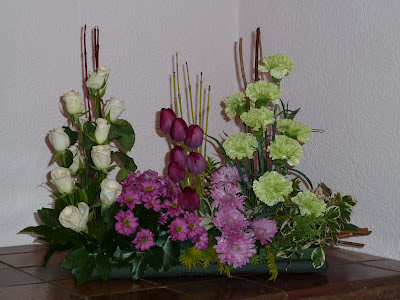 The garden does not need to worry. I shall always be a gardener first and a flower arranger second.
Posted by cheshire wife at 22:10 27 comments:

This is one beetle story that I am sure no one is going to envy me.

Last Spring while doing a regular clean of our snug I noticed that something had been having a jolly good munch of a couple of areas of the carpet - in a corner and along the skirting board. There was no obvious sign of a culprit. I gave the carpet a good vacuum and thought no more about it. Then one warm evening during the Summer, and there were not many of those last year, as we were about to go upstairs to bed I noticed about a dozen flies crawling up the wall. Before I went to bed I just had to clean them off the wall. I could not leave them there overnight to cause havoc. So out came the vacuum cleaner and I used the nozzle to remove them from the wall, as that seemed to be the easiest way of doing the job without making a mess of the decoration. The snug would, of course, be the only room that is wall papered. After that I started to keep an eye on things. I continued to find flies on the skirting board and carpet almost every day and the carpet was becoming more and more moth eaten. Fortunately all the areas of carpet involved were in corners or behind furniture and only the carpet in the snug was affected. We had never had a problem anything like this before and were at a loss to know where to start to resolve it. As it happened the carpet had been bought from a chain, which had closed its' Chester store. This made life difficult as my first port of call would have been them. Undeterred I found their head office address on the Internet and wrote asking their advice.

While waiting for their response I used to crawl around the carpet several times a day removing the culprit insects. I kept a tally on the calendar of the number that I caught. The average was six per day. About two months later we received a reply which stated that the problem was nothing to do with them. The company that we had purchased the carpet from had gone into liquidation and the new company, with almost the same name, had nothing to do with it! But in the case of a genuine fault somebody must be responsible. We appeared to have no alternative but to ask a  pest control company to come to have a look at the carpet. They promised to be discreet. However, I hardly think that finding a man on your doorstep dressed in a white overall suit of the sort worn in crime/murder programmes on TV is discreet. Having had a look at the carpet he confirmed what we had suspected, that we had an infestation of carpet beetle. In our case the insects looked nothing like a beetle, but the term 'carpet beetle' seems to be used for any sort of carpet infestation caused by an insect.


The treatment was to spray the whole carpet with a solution of alpha cypermetherin, but before this was done we had to sign a COSHH assessment and he had to get the canister of the chemical from his van. This involved walking up and down our garden path several times. By now, in addition to the white overall suit he was also wearing head gear, a mask and gloves. I am sure that the neighbours must have been beginning to think that there had been at murder at our cottage. We stayed out of the room while the spraying was being done and for another hour or so afterwards. This treatment, which can not have actually taken more than 15 minutes, cost a cool £200.

Every cloud has a silver lining. I was not to clean the skirting board or vacuum the carpet for three weeks.
Posted by cheshire wife at 19:15 18 comments:

From plaster to canvas

I have always known that I would never be able to afford a Picasso or a Constable. Consequently I have never been a connoisseur of art. We do have pictures and paintings in the cottage but nothing of any value. Most of our pictures were bought when we saw something that took our fancy or liked the look of. That has seemed to me to be the best way to buy pictures, as going out specifically to buy one does not seem to work. In the same way that I rarely seem to be able to go out and buy a particular item of clothing. Now we have acquired some of my mother's pictures which is rather nice and we will find a home for them in the cottage once they have been reframed.

So, I have been rather surprised to find myself drawn to the David Hockney exhibition at the Royal Academy in London. 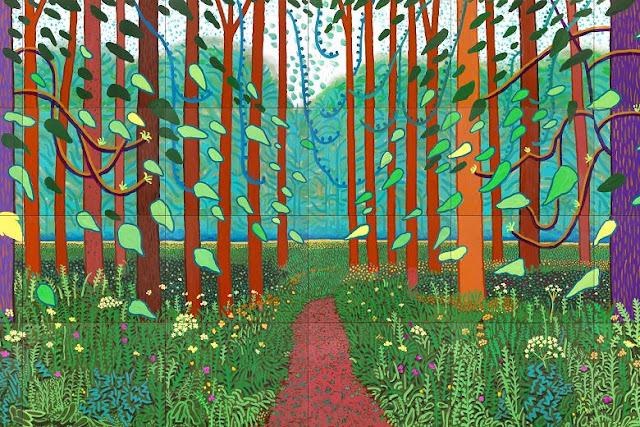 The exhibition is a sell out and is so popular that they are having to consider extending the opening hours. The fact that most of this exhibition is of paintings of my native Yorkshire probably has something to do with my interest. I realise that most of his paintings are gaudy and very simple and look as if they could have been painted by a child, but Yorkshire is in essence a simple, no frills county. Parts of it are stunning. The fishing village of Whitby is as picturesque as any of the pretty Cornish fishing villages. The Yorkshire Moors admittedly can be bleak and wind swept, but when the heather is out are a match for the likes of Exmoor. The majority of paintings on show are landscapes of the area known as The Wolds which is an area of small hills in North and East Yorkshire. 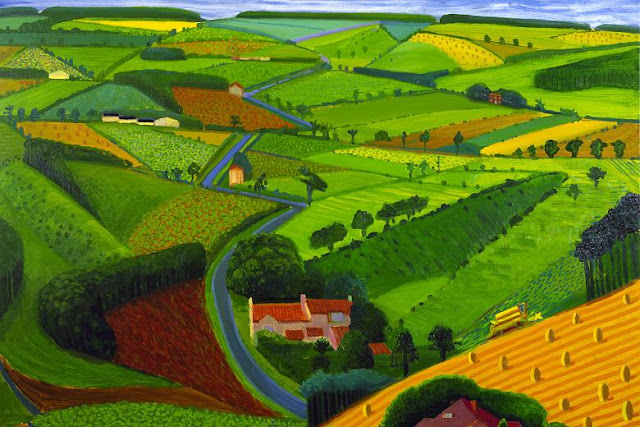 However, there are also some paintings from his time spent in America when he was better known for his paintings of Californian swimmings pools than English landscapes. Some of his paintings were originally iPad sketches which he has transferred to canvas. One of his old lecturers from his days as a student in his home town of Bradford has described his work as  that of a decorator. I only wish that I could decorate half as well as him.

If you are interested there is a programme about the exhibition on Sky Arts 2 on Thursday February 9 at 6pm, but if like me you do not have that channel, amongst the 101 channels that you do have, this clip may be of interest to you.

We have at last finished decorating our kitchen. It seems to have taken us about three weeks whereas the first time that we decorated it, we seemed to get it done in about three days. When you decorate some rooms you can shut the door on them at the end of the day and forget about them, but you can not do that with a kitchen. It became a drag having to be constantly removing the clutter from the kitchen so that we could get on with the painting. So I decided that I would concentrate on the decorating and then the much needed cleaning. I have now cleaned everything that can be seen which just leaves the inside of the cupboards and the ovens - grhh!
Posted by cheshire wife at 13:00 22 comments: