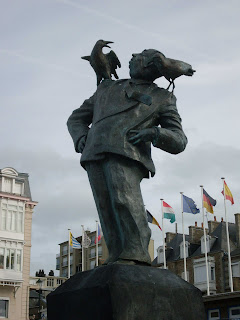 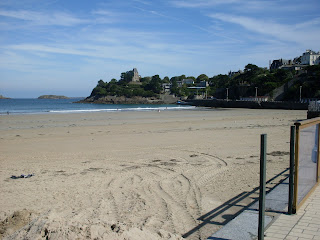 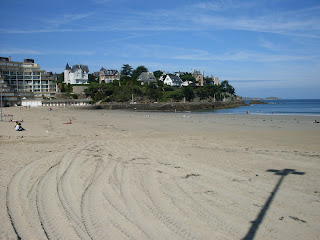 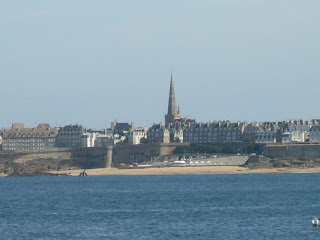 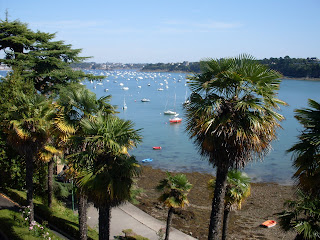 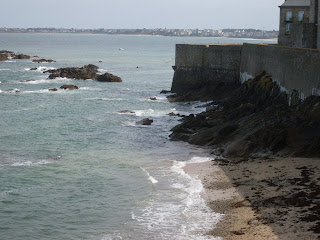 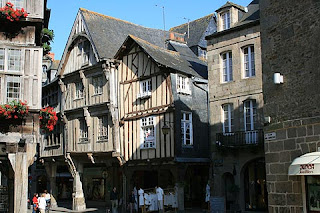 The photograph is courtesy of the Internet, as my camera refused to work. Here we visited a large open air market, where you could buy almost anything. I am sure that in the UK health and safety regulations would prevent many of the items being sold at such a market, but this was France. Something that I really noticed was how smart  and chic the French women are. All neatly dressed in jackets, trousers and scarves to go to the market. Sadly our breath of French air soon came to an end and we found ourselves on the ferry back to Portsmouth.
Posted by cheshire wife at 08:00 22 comments:

My return to blogging has not been as quick and as smooth as I had hoped. I had intended to wait until after the Visit to return to my blog as I realised that preparing for it would be time consuming, but when two planned dates for the Visit were cancelled with no new proposed date I decided to return sooner rather than later. The Visit was my mother-in-law (MIL), sister-in-law (SIL) and her husband coming for lunch. They only come once a year and it has to be during the summer as MIL does not travel well in the dark. Originally the visit was scheduled for the first weekend in August and MIL kept telling my husband, who is her one and only son, how much she was looking forward to it. At the time my infected cyst was at its' worst and I could have happily cancelled the planned visit, but not wishing to disappoint MIL I soldiered on. The Friday before they were due I went off to the supermarket, in the morning, with my mile long shopping list. Half way round the supermarket, which had recently been extended and re-arranged, when I couldn't find an unfamiliar ingredient and wasn't feeling great, I thought to myself 'you should have cancelled this'. I did manage to find what I was looking for. That afternoon it was off to the hairdresser. Not in honour of the Visit but because I needed to go and it at least gave me a bit of time to relax while the hairdresser worked her magic. I returned home to find that while I had been out MIL had phoned to say that they would not be coming because her carer was going to be on holiday and there was no one to get her up! At this point I had done everything except cook the food. I wasn't terribly pleased but the reprieve was welcome and I managed to freeze most of the perishable food.

A new date would need to be arranged with SIL. The second weekend in August would not be an option because MIL's carer would still be away. Anyway about a week later SIL phoned my husband to say that they could come the third weekend in August, but that there was a slight snag in that one of her husband's unmarried brothers (BIL) would be staying that weekend and would have to come too. My husband tactfully explained to her that we had not invited her BIL and we would prefer him not to come. Over the course of the next few days there were several phone calls between husband, SIL and MIL. SIL kept insisting that BIL would be coming. Eventually she informed my husband that her husband would take his brother off to the local pub for the afternoon, when they arrived. How was this going to look? At this point I saw red and cancelled the second planned visit. For once in our lives MIL and I agreed as she did not want BIL spoiling her visit. Perhaps I should explain that if this were Pride and Prejudice, BIL would be Mr Collins. SIL would be Mrs Bennet and her husband would be Mr Bennet. Quite fitting as their daughter is getting married later this month. MIL would be Lady Catherine de Bourgh. My husband would be Darcy and I would be Elizabeth Bennet. I have the necessary green eyes. Oh dear! that was Scarlet O'Hara in Gone with the Wind.

I suggested that we re-arrange the Visit for the fifth weekend in August which was the bank holiday weekend, as the fourth weekend was not convenient for us. This did not suit SIL who, without checking with us, had moved her arrangements for the fourth weekend onto the fifth weekend in the expectation that they would come here the fourth weekend. After yet more toing and froing we re-arranged the visit for the first weekend in September, which was not ever so convenient for me, but it was either then or not at all. September is a busy month for us and I would have preferred to wait until October, but by then SIL will be house sitting for her newly married, honeymooning daughter. So the Visit took place last weekend and I am pleased to report that it went very well.

After all that we are going away for a much needed break. Back in about ten days.
Posted by cheshire wife at 08:00 16 comments: