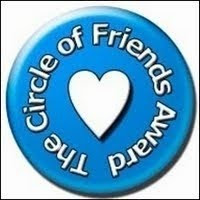 Last week it was the Brits. Last night it was the BAFTAs and soon it will be the Oscars. Nothing so prestigious for me, but I have been given this Circle of Friends award by Carol at Not only in Thailand and Gilly at Winds of Change. So it is a big thank you to both of them. Now I have to post about five things that I like to do, then pass the award on to ten bloggers.

I suspect that the things that I like to do are pretty much the same as every other blogger. Anyway, here goes.
Now I am supposed to nominate ten bloggers to pass the award onto but how could I choose just ten bloggers? I have decided to duck out of that decision. Any blogger who leaves a comment on this post is a friend of mine and may have the award.
Posted by cheshire wife at 20:48 33 comments: 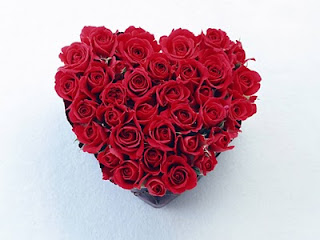 The next few hours passed in a blur of unpacking and decisions about where furniture would go. By about 8 pm we were ready for something to eat and ventured out into Leatherhead with the aim of finding a take away. We didn't know Leatherhead very well and were unable to find a take away, so we eventually decided that we would have to find a restaurant. There weren't many restaurants in Leatherhead then. Since we moved away several have opened up. Any way it was Valentine's Day, so they were all full, which meant that we had to queue, in our house moving clothes of jeans and sweat shirts, among the smartly clad couples out for a romantic evening. By now the date meant nothing to us after the trauma of the move. Once fed it was back to the house for more unpacking and sorting out until exhausted we tumbled into bed at about midnight.
Posted by cheshire wife at 07:00 25 comments:

Upping Sticks and Moving On

After the last post, in which I aired some of our dirty linen in public, I thought that I might be asked to pack my bags and go, but I am still here at Muddy Lane Cottage. This post is about different aspect of a long distance move.

When my husband was offered a job in Chester in April 2003, the fact that a house moved was involved was not really a problem. We had been trying to move house for three years. The problem was the 200 mile distance. My husband commuted weekly to Chester, staying in a B&B,while I stayed behind in Surrey. I had plenty to occupy myself. I worked and I had, hopefully, an impending house move to organise.

Shortly before husband started work in Chester the Iraq war began and the estate agent made mutterings about lowering the price of the house to help it sell. We resisted his mutterings. Seven years later the Iraq war and its' consequences are still rumbling on. We were lucky, within a few weeks we accepted a good offer for the house.

One weekend in June I visited Chester for the first time to see where my new home would be and to start looking for a house for us to buy. On the Saturday morning we did the rounds of all the estate agents. Over lunch we sorted out the details and in the afternoon we started to drive around some of the possible areas. It was all very new to us and we did not get very far we things. A few weeks later we looked again and decided that we would be better to rent initially, which would give us a good chance to look around the area.

The move form Surrey to Chester went fairly smoothly. Nothing got lost or broken. We had had three years to organise it, but it was at he end of the incredibly hot Summer of 2003 that we eventually moved house. I had just had to ignore the heat and get on with sorting things out in preparation for the move, otherwise we would have been far from ready when the removal men arrived. It took the removal men three days to move us. A day and a half to pack us up. Half a day to travel to Chester, then a day to unload and unpack. Finding the space for everything in the rented house was a challenge. We had estimated that we would be able to fit into it, but that it would be cosier than we were used to. Then there was the double garage that we could use for storage. When we had viewed the house, the previous tenants had had a sea of boxes in the garage. After a few days we were straight-ish.

The next challenge was to start integrating ourselves into life in Chester. Husband had taken to socialising with his work colleagues which has its limitations, especially as most of them were about half his age. I had decided that I would be a lady of leisure until we had moved into our own house. Hopefully this strategy would give me the time to find my way around the area and maybe to get to know some people. We decided to give evening classes a try. Husband went to woodwork and I went to flower arranging. We had both previously been to classes in these subject whilst living in Surrey. Woodwork was useful for getting things made but doesn't really have social side to it, whereas flower arranging has a flourishing social side and I came home, each week, with a different flower arrangement. This interest has now become a hobby, with my interest in gardening being an extension of it or maybe flower arranging is an extension of gardening. Now I regularly go to the local flower club and horticultural society in a nearby village. Slightly by accident husband has ended up on the committee of our village hall, as treasurer, for his sins. This was something that he had wanted to do along with living in a wisteria clad Victorian cottage. So he is in seventh heaven - well some of the time. Now he has a circle of committee friends plus the crowd that he plays squash with at the local health club. And one of his committee friends has now asked me to take her to flower club with me. At last we feel, as if, we are part of the community.

Now read the prequel.
Posted by cheshire wife at 06:00 28 comments: