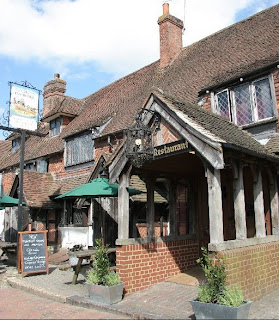 Last weekend went far better than I could have hoped that it would. Absolutely everything went to plan! And it had been planned with military precision. Fortunately we have done the trip down to Sussex enough times, now, to have got the routine of it sorted to a 't'. My husband and I had a good journey down to Sussex. We spent the night at Forest Row which is a very pretty village not far from where my mother lived. It is a typical Sussex village of tile hung elevations, black and white timbers and yellow sandstone cottages. I wished that I had taken my camera but I forgot it. We stayed at the 15th century Chequers Inn, pictured right. Inside it is all old beams and brick open fireplaces. We had a good meal there on Saturday evening, followed by a good night's sleep. Then on Sunday morning we packed up my mother and set off back to Chester.

As we got my mother out of the car at the home, the manager of the home came out to meet her, offered her her arm, which she took and walked straight into the home without any problems! The nurse who manages this home is amazing. She has told me that she has been working there for ten years and has recently had a baby, but she looks as if she has just left school. It is not just the policemen who are getting younger! She was so good with my mother. She was like putty in her hands. The possible problems that I had envisaged just did not happen. At the end of last week, when the staff at the home could see how worried I was about actually getting my mother into the home, they assured me that they would be able to handle her. I didn't doubt them but I was not totally convinced as my mother used to be very awkward at times. They made it all look so easy.

Mum is now settling into the home, but is very confused as to where she is and is hoping that my brother will collect her and take her home, this coming weekend! He won't. I have spent most of my time this week looking for clothes for my mother. The home requires that her clothes can be machine washed then tumble dried. Most of what she currently owns is hand wash or dry clean only. Then everything needs to have her name in it. The home has ordered name tapes for her but for now I am using my old school name tapes, cutting off my first name and just using the surname. This last week has disappeared in a haze. It is probably just as well that I can not remember too much about it and I know that my mother can't, as by Monday she had no recollection of the events of Sunday, for which I am grateful.

I am sorry that at the moment I am not managing to visit your blogs but hope to resume visiting as as soon as I get my mother sorted out.
Posted by cheshire wife at 20:42 18 comments: 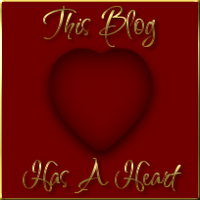 When two is a crowd

I have not posted for so long now that you are probably thinking that I have locked myself out of the cottage again and disappeared off the face of the earth. No. This posting hiccup is as a result of me working at maximum capacity and my husband being at home in between jobs, expecting to be waited on hand and foot. From my point of view such a combination is not conducive to managing to do anything more than essential tasks.

Last Monday I worked and my husband took himself off to Dolgellau, to research his family tree. The alternative was to stay at home and make cups of tea for the roofer who was working on our barge boards and gutters. We have a very Welsh surname. There are thousands of us in Wales. A few generations ago my husband's family did live in Wales, but have migrated away managing to get as far as Surrey. Maybe it is fate that has brought us to Chester where we now live about a mile from the Welsh border. He had a successful day.

On Monday evening, knowing that I was not working on Tuesday, my husband asked what we were doing the next day. 'Housework' I answered. It is something that he isn't keen on but it has to be done. He doesn't even know where I keep the dusters and the Dyson. To keep him out of the way I suggested that he put some of our pre-owned and no longer required items on eBay. He was happy doing that and it got him out of my way. And a week on he has managed to sell some of them!

On Wednesday he went to Manchester for an interview and I did the weekly supermarket shop. I had hoped that we could go shopping in his car, so that we could stock up on those bulky items that I struggle to fit into my small car. On Friday afternoon he heard that he had got the contract, that he had been interviewed for, so I'll forgive him.

Thursday morning it was back to work for me. So that he could play squash in the evening, my husband agreed to cook lunch. A simple affair, for which I had written the cooking instructions in words of one syllable. My lunch break is just long enough for me to get home, eat my lunch then go back to work. In the afternoon he took himself off to look at cars. His car does need replacing. Annoyingly he has just had to spend £300 on running repairs to it. He test drove the car that he had his eye on and would I think have bought it there and then, had it not been for the fact that he felt that he ought to get my approval, before committing himself. I suggested that he looked at some more cars before making a decision on which one to buy. That was to be Friday's job but he did not get beyond looking on the Internet. When I got home, on Friday evening, I was presented with the details of four cars in four different locations. I quickly cut it down to two. On Saturday we looked at the car that he had had the test drive in and decided to go for it. We may never know if we should have looked at the other car, but husband is happy!

Yesterday my husband started the new contract in Manchester. For nearly two years now he has been commuting weekly, to Leeds for work. Working in Manchester means a daily commute, which is good because we shall see more of one another, but it also means adapting to a different routine. I hope that you will bear with me as I get used to having my husband at home and also find time for my blog.
Posted by cheshire wife at 20:26 21 comments: