So Christmas is over for another year and the snow which had transformed most of the country into a landscape from a Victorian Christmas card has thawed and taken with it whatever Christmas spirt there was. To me and to many it has not felt like Christmas this year. Perhaps my experiences in the run up to Christmas had coloured my feelings.

I eventually manage to kick off my Christmas shopping, about two weeks before Christmas, with a trip into Chester. First I had to return a jumper, which had shrunk, to a well known high street store. Having explained the problem to a young assistant, she dawdled off to compare my shrunken jumper with one currently on sale. After about 15 minutes she returned agreeing that my jumper had indeed shrunk. She then smugly informed me that because I had hand washed rather than machine washed the jumper that she would not give me an exchange or a refund. I collected my jumper and stalked out of the store, ignoring the thousands of items on sale in the store. I had not anticipated that an exchange or a refund would be refused so did not have an argument prepared. If I had machine washed an item that required hand washing I could understand their logic. So no festive spirit there, then.

Next it was across the road to another well known high street store. Here I had hoped to buy my mother a cardigan. I spotted what I was looking for on a display high up on a wall, but could not see any to buy in the shop. Fortunately I managed to find an assistant who offered to take a cardigan off the mannequin for me. She warned me that the mannequins tend to be small which is fine as my mother is small. The mannequins may be small but they have chunky arms and the sleeves of the cardigan had been stretched. I asked if they would shrink when washed. The assistant did not know. The cashier did not know. The fitting room lady said that she did not think so and I decided not to buy it. With hindsight perhaps I should have asked them to put my shrunken jumper on the mannequin to see if it could be stretched.

Then I decided to try my luck at finding the book that husband's brother in law had asked for. It was nowhere to be seen in the well known high street book shop cum stationers that I tried first. Perhaps I would do better at the other well known high street book shop that only sells books. I don't often go into this shop. Not because I don't like books, quite the opposite, once inside it is difficult to get out. I was trying to find my bearings when a young man wearing a Santa hat asked if he could help me. I explained what I was looking for. He looked serious. I was out of luck he said. It was sold out. He took me upstairs, looked at his computer and made a phone call. Then pronounced that it would be 15 January before the book was available. I thanked him for his trouble. Still I had not bought anything.

Now I headed to that well known high street purveyor of all things pharmaceutical and toiletry in the hope of finding a gift set for my mother. They had everything but what I wanted. I did manage to find what I wanted in a smaller less well known shop. By now it was lunch time and time to go home. The idea of Internet shopping was becoming very appealing.

After a quick lunch I managed to find and order, on the Internet, the book that husband's brother in law had asked for. The automated response confirmed my order. Success at last! Flushed with success I  took myself off to the local garden centre in the hope of that they could furnish me with something off my  present list. In short no, but I did come home with some new Christmas decorations.

Back home it was time to check my e-mails and have a cup of tea. To my horror there was an e-mail advising me that the book that I had ordered was out of stock! All that effort and all that I had to show was a gift set and some decorations. Time was running out and Christmas was starting to look bleak. Once I got my act together the shopping did get done but there is more to Christmas than shopping.

A few days later I was annoyed to receive a letter from the nursing home where my mother is a resident, claiming that I had not paid an invoice sent out in July. I know that I have paid it and I have the proof. Not a very charitable thing to do just before Christmas and it left a nasty taste in my mouth.

Finally there was the icing on the cake. It was lunch time on Christmas Eve. I was in the utility room and did not hear the knock on the front door. Husband was home and he had answered it. As I walked from the utility room into the kitchen I heard voices. It was one of the neighbours and she had not come to wish us compliments of the season. It was the WAG from next door. We have complained to the Environmental Health department of the local council about their dog barking in the early hours of the morning. The council have written to them and have informed them that the are being monitored. She came round for a rant. She believes that the dog does not bark. I wish that it didn't. I decided to leave her to husband who eventually shut the door on her.

After all of that we had a quiet Christmas courtesy of a streaming cold. At least we got out of going to the in laws. That has been rescheduled for January 2. From now on things can only get better, I hope.

Happy New Year everybody!
Posted by cheshire wife at 18:00 19 comments: 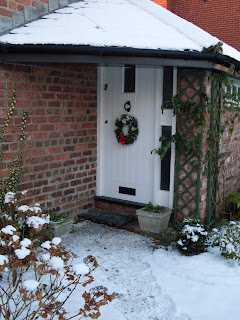 I emerged from the working frenzy a week ago and since then it has been eyes down to get ready for Christmas. At last I am done.

This is a photograph of the cottage's front door taken earlier today. Recently it has witnessed some interesting incidents. I hope that I shall have the time to write about them in 2011. But for now I wish you all a happy and peaceful Christmas.
Posted by cheshire wife at 18:30 10 comments:

All work and no play makes Cheshire Wife a dull girl. At the moment the chap that I am working for is in the middle of a five week holiday in sunny Oz, which means that I am working  extra days in freezing England. Consequently I am stretched to my limits. Really I could do without this extra work in the run up to Christmas, but this is absolutely the last time that I shall be covering his pre-Christmas holiday. (He goes away every year at this time.) Fortunately or otherwise, we have been lucky with the weather here and have escaped with just one inch of snow, so I can't even take time off work because of the weather. Right now I should be writing my Christmas cards, not this post. Then there are all the other Christmas preparations - making the cake and the pudding, buying the presents, putting up the  Christmas tree and the food shopping. I am not sure when it is all going to get done. Christmas will come whether or not I am ready for it and in three weeks time it will all be over.
Posted by cheshire wife at 21:30 13 comments: