Last Thursday night we went to see the Canadian rocker, Bryan Adams, at the MEN Arena in Manchester. We arrived in good time so as not to miss any of the concert. At 7.30 pm we found ourselves sitting in a half empty arena as the support band took to the stage unannounced. We haven't a clue who they were. They were instantly forgettable and too loud to hear properly - I know that sounds like a contradiction but really they just seemed to be making a noise. After their half hour warm up slot they left the stage and it was another half an hour before Bryan Adams made his appearance, by which time any warmth that the warm up act had generated had risen up to the rafters, whilst the audience sat in a slightly chilly arena. Had we realised that the concert would not really start until 8.30 pm, my husband could have had another hour at work or we need not have bolted our meal then driven hell for leather down the motorway. What was also slightly disconcerting was that in the area where the stalls would normally be, the seats had been removed and the audience there were standing. The audience continued to make their way to this area and to fill up the other half of the seats during the warm up act and the following half an hour. For the duration of the concert people were milling around at he back of the standing area, and I felt as if I were watching from Picadilly Circus or Waterloo Station, as we were sitting at the back of the standing area. By the time Bryan Adams appeared the arena looked to be just about full, but I would not say that it was a sell out. 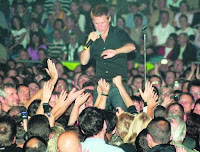 In the darkness it was difficult to see exactly what was going on, but we could see Bryan Adams on the screens either side of the stage. Then we realised that he was making his way, through the audience to a small stage in the middle of the standing area. From where we were sitting we had a pretty good view of his first two numbers, which he performed acoustically from this small stage. At the start of his th 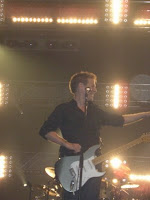 ird number his band came to life on the main stage and he made his way through the audience, back to the main stage. I am sure that most pop stars would not even try such a thing for fear of being mobbed. Now we were into a rock concert, albeit soft rock. It was raw, noisy and loud with a multitude of brightly coloured lights. At times the sound was so loud it was distorted. Bryan Adams performance could not be faulted, as he belted out his repertoire of hits for over two hours, bouncing around the stage as he sang. Strangely there was very little atmosphere in the area. Even the enormously popular Everything I Do, I Do It For You failed to rouse the audience. At last, and I mean at last as it was his final number, the guitar twanging Run to You had the audience on their feet. Then he was gone, returning a few minutes later to do a five number encore. By the time he eventually left the stage it was nearly 11.00 pm and time to head back down the motorway.
Posted by cheshire wife at 18:05

I haven't been to a concert for ages, I used to love them so. I must get out more!!

Love Bryan Adams - wish I had been there too!

I used to love that Everything I do song. No matter how many times I hear it I still love it.

Sounded different from the norm. Did I detect that you weren't that keen!

I might have enjoyed that when I was younger!

Surprising there wasn't much atmosphere. Good that you went though - sounds fun.

MM - I was a bit disappointed.

As if you didn't drive hell for leather down the motorway even if Bryan Adams wasn't at the end of the trip! LOL...I can see you bolting and running lol...glad you had a good time, anyway!
Sandi

Sorry to hear that it was a bit disappointing, not what you want when you are making the effort to go to something like a concert! Especially the atmosphere, you would have thought that he could get a really good one going. Nice to be so close for the first couple of numbers though, great viewing.

I have been disappointed a few times with the supporting acts at the MEN. We are next due to go there in April to see Simply Red but probably won't get there too early so will miss the warm ups.

This will probably make you laugh but we went to Warrington Parr Hall last night to see Jayne McDonald (Loose Women) - she was fantastic, brought the house down in fact. MWM likes her a bit too much for my liking! (wink)

We haven't seen Bryan Adams in concert.........we go and see Tina Turner in just over a weeks time.

Haven't heard a song by Bryan Adams for ages, it's a shame it wasn't more entertaining.

I also have another good recipe posted tomorrow (Tuesday)

CW - a pity it wasn't as enjoyable as you had probably hoped. Have been to a few concerts - the outstanding ones being Neil Diamond, Johnny Mathis, Shirley Bassey. A x

All of my Todays said...

Just popped over from Mimas to visit. Sorry you didn't enjoy the concert as much as you thought you would. x

The last and only concert I ever attended was at the Albert Hall. Our son had bought the tickets as a surprise for us as he knew I had adored Frank Sinatra for ever.
This was way before the big screens that now allow everyone to see their idols. We were in a box opposite the stage on the third tier. Sammy Davis came out first and captivated us all with his huge talent, then Liza Minnelli sang and danced...then suddenly, a small door opened at the back of the stage and the familiar figure of Frankie walked out to the most enourmous roar.I was on my feet for the entire time, tears rolling down my cheeks, and shouting, to the amusement of those nearby 'I love you Frankie.' He was a tiny figure, maybe an inch in height from my perspective but his presence filled the hall and I was so happy to be in the same space with him. Had there been big screens I think I still would have looked at him, the person on the stage.

I used to love the crammed together, loud and distorted music thing, but now, not so much so.
Congrats on your shout out from David's today!

I have only ever been to one concert in my life and that was Celine Dion at MEN Arena which was then called something else (back in 1995).

Loved that famous Bryan Adam song though, you've got me singing it now!!

I'm glad you enjoyed the concert! It's always good to get out and see some great live music.

SJA & Moannie - the best concert that I have been to was Neil Diamond, in June this year. He was amazingly good and the atmosphere in the MEN area that night was electric.

Yes - I HATE things that are too loud. I'm going to find out what time Coldplay are due to be on and we'll miss the support act - just a bore!