Turning back the clock

This weekend in the UK we have turned our clocks back an hour and are now on Greenwich Mean Time (GMT). For me this weekend has coincided with reminiscences of the area that I grew up in, which has been prompted by the recent success of Hull City football club, who are at present the talk of English football. On Saturday evening, after a fairytale beginning to their first season in the Premier League, they were equal on points with Chelsea and Liverpool.

I was born and brought up in East Yorkshire. Hull, or to give it its' full name Kingston upon Hull, was the nearest town. It is not a city - it does not have a cathedral. The centre of Hull was badly bombed in World War II and rebuilt in utility mode so was never very exciting. Now, after the demise of its' trawler fleet and the decline of the docks, Hull is being regenerated. 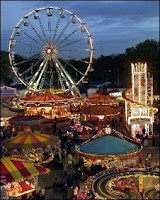 Each year in the second or third week in October, Hull Fair takes place. It always used to be the week of my birthday and I used to think how lucky I was to go to Hull Fair as a birthday treat, not realising that every other child also went, regardless of when their birthday was. 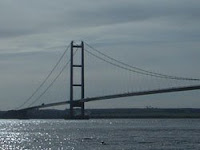 The gateway to Hull is the Humber Bridge which when it was built was the longest single span bridge in the world. 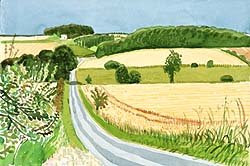 ide. In recent years the Yorkshire born painter David Hockney has exhibited a series of water colour paintings of the Yorkshire countryside, which are instantly recognisable to anyone who knows the area. Going north from Hull you come to the attractive Georgian market town of Beverley then it is off to the coast to Bridlington - a fishing port which is as attractive as any in Devon or Cornwall but unfortuneately does not have the weather. Further up the coast is Scarborough which has a beach to rival any in the world but again is let down by the weather. Further up the coast again, is the pretty fising village or Whitby and the picturesque Robin Hood's Bay. Then going inland there are the Yorkshire Moors.

This is just a taste of what the area has to offer.

That was a trip down memory lane. I went to Hull University, lived in halls in Cottingham and frequently visited Beverley. Thanks!

Really interesting as it is not an area that I have ever visited - sounds like I have missed out.

I don't think I have ever been to Hull. I have spent many holidays in Scarborough its a great place.

Thanks so much for sharing the information about your hometown. I love the pic of the bridge...that's some bridge even by today's standards! And congrats on the foot ball standing!
Sandi

Goodness, I've only just got to see this post, but I'm glad I did. Like you, I was born and brought up (partially) in Hull (we left when I was nine); later, my parents moved back to Beverley, and now live on the coast just north of Bridlington. Wonderful places in a wonderful county.

Give me Staithes and Whitby any time - even in the rain. We love Yorkshire. In my next life I'm going to have a cottage with ducks and serve home made cakes and afternoon teas by a stream in Yorkshire!

I've never been to Hull. It's good that the area is being regenerated - maybe it will encourage more people to visit! :)

working mum - hope you enjoyed your time at Hull Uni.

the dotterel - it is a small world!

We were in Hull a couple of weeks ago, Beverley Road to be precise. I was getting my new leathers. But the shop owner was talking about Hull Fair and he was absolutely bursting with enthusiasm. It certainly is a local popular annual attraction!