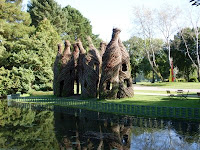 At noon on Monday, we drove off the ferry at Cherbourg and into a traffic jam and queue for passport control. Armed guards stood around at the actual control point, but they did not look very threatening, just a bit off putting. We had a comfortable first night in a converted stone mill in a small town just outside Rennes. This unusual sculpture was on display in the hotel garden.

The next morning we set off for Poitiers, via Vouvray, where we made a detour to a wine cave (shop) which we had found last year. Our hotel, near Poitiers, had seen better days, but when built was no doubt state of the art. We had requested a quiet room. The room that we were offered was next to the lift which we pointed out was probably not very quiet. Reluctantly we were offered another room which we took. The hotel was a bit like Fawlty Towers. The service was appalling but we did have English speaking TV in the bedroom. 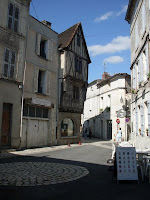 On the only sunny day of our holiday we went to Cognac, which is a lovely old town with a lot of history to it. After lunch, not far from where this photo was taken, we to the Hennessy brandy distillery for a guided tour. Hennessy was founded in 1765 by Richard Hennessy, an Irishman who settled in that area of France. Initially we were taken across the River Charente by boat, then we were taken into the original cellars where the cognac is matured. First we were shown a film about the growing and harvesting of the grapes, then we were shown the equipment used for the vinification and distillation processes and the art of cooperage. Even the oak casks have to be old before the cognac can be stored in them. What we saw was actually a museum. The gra 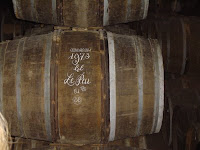 pes are now processed in a larger and more up to date facility then moved, once stored in the barrel, to the second, silent cellar that we went into, where the brandy is allowed to mature. The most valuable brandies are stored behind bars. After the tour it was back across the river for a tasting and a chance to buy some Hennessy cognac. All the brandy houses in Cognac put on these tours. We went to the Hennessy tour because the timing of it suited us best. 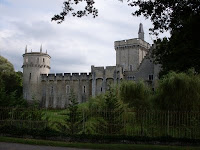 The next day we found, Chateau Guillame, a pretty little chateau in a hamlet down several miles of single track road. The chateau was built by Guillame X, father of Eleanor of Aquitane and here may have been her birthplace. 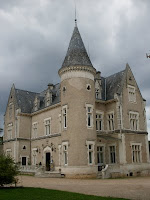 Next it was off to Perigueux, the historic and attractive county capital of the Dordogne. Our hotel was a chateau but we were staying in the Orangerie - an unattractive annex recently built in the grounds to house the package holiday tourists. The annex resembled a prison. Inside the floor and walls were grey with dark wooden doors. Our room was like a cell - small and uncomfortable. The only concession to luxury was the satellite TV with 30 French speaking channels. Not even one of English.

From here we had a day trip to Bordeaux, which was a two hour drive plus one hour in slow moving traffic, from the out skirts of Bordeaux into the centre. Whilst trying to find somewhere to park we attempted to drive the wrong way down a one way street which prompted much tooting of French horns. We just managed to eat our lunch outside, before the heavens opened. Bordeaux is a beautiful city of 18th century architecture and is a UNESCO World Heritage site. Our visit was spoilt by the weather and traffic. So there are no photos, but I would like to go back to have a better look. 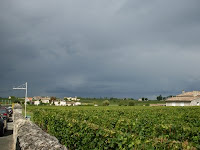 On our way back to Perigueux, we drove through the vineyards of St Emilion, stopping at the wine cave in the village to buy some wine. This photo was taken just before the heavens opened and we dashed to the wine cave for cover. St Emilion is an attractive old village, but again the weather spoilt our visit. 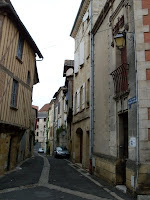 Our last day trip, on yet another grey day, was a drive through the beautiful Dordogne countryside to Bergerac, the home town of Cyrano de Bergerac, the French novelist, but we are probably more familiar with the Jersey detective played by John Nettles. It was a Sunday, when we visited and almost everything was closed which was disappointing, but we did manage to find a wine cave that was open.

The following day we began our journey home, stopping overnight in a village near Le Mans. At last we had found a gem. The hotel was pretty, quiet and comfortable with a good restaurant. It was everything that we could want after a hard day's driving. We plan to return next time we visit France.

I shall remember this holiday for the many fields of sunflowers that we drove past, the exotically planted tubs of dahlias, verbena bonariensis and pelargoniums which we saw almost everywhere we went, the French countryside which is wonderful and especially the picturesque villages with window boxes and front gardens planted with busy lizzies, marigolds and begonias and finally for the number of variations on current fashion that we saw flaunted by the young French girls. Even the young in France look elegant.

authorblog Post of the Day nomination 8 October 2008. Thank you David.
Posted by cheshire wife at 18:22

Many years ago I traveled a similar path. Such a beautiful country, if lacking somewhat in friendliness at times!

The scultpture in the first photo looks very interesting :)

What a wonderful post. I enjoyed your narrative very much and the beautiful photographs, outstanding. Thanks so much.

Did you notice how people create pictures in the sunflower heads by removing the seeds? Some of them are quite exquisite. MH

Ahhh, France. How beautiful. Don't worry about all the sunshine you missed over here... there wasn't any. I love those sculptures at the hotel! I could've easily shot a day's worth just getting those at every angle :-)

supurb photos, thanks so much for taking us with you to France.

What beautiful shots of the landscape...rather makes you feel you are there...I like the bits of history (I love history but prefer herstory) thrown in so we would understand why we were there. I was a bit let down over the fact that the cops didn't look as they should...I thought back to when I was a working cop and the gun belt, the stun gun, the taser the pr24 (baton) the 38calibre on my hip and if I looked at myself, I looked officious...now I find I just looked off putting...darn!
Sandi
ps
congrats on the POTD from David!
Sandi

Well at least you now know the places not to stop at if you revisit. Shame the weather wasn't better for you but you had a change of scenery. I enjoyed the trip with you. :)

Thank you for your comments.

Sandi - they were not police. They were soldiers dressed in fatigues, with no helmet or any sort of protection, holding a gun that looked like a toy.

Sounds like a great holiday. Congratulations on your POTD nomination.