A resting place in the sun 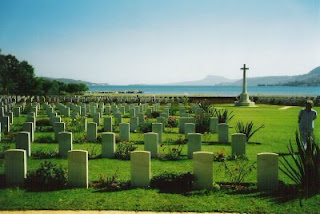 A few years ago whilst on holiday in Western Crete we visited the Souda Bay cemetery, which was gifted to the War Graves Commission by the Greek people after WWII. There are 1527 graves of service men who lost their lives in the Battle of Crete, which took place between May 20 to 31, 1941. Most of those buried there are British but there are 447 New Zealanders and 197 Australians. Some are unknown. Most of them were late teens or early twenties. So young.

Souda Bay is a horse shoe shaped bay to the east of Chania. The cemetery, which is surrounded by eucalyptus trees, lies at the bottom of the horse shoe facing out into the bay. The setting is quiet and almost beautiful. The sea, which was like a mill pond that day, gently lapped the nearby shore. The cemetery is immaculate with rows of white head stones, neatly mown grass and tidy flower beds. There was not a weed, dead flower head or piece of litter to be seen. The cemetery is protected by the hills on its' northern side and the White Mountains to the south. These cast a shadow over the sea and give a slightly eerie feel. But the overwhelming impression is of a very peaceful, tranquil and serene location, making it very difficult to contemplate the bloody battle which took place not far away. I did not want to leave and there are not words adequate to describe what I saw.
Posted by cheshire wife at 08:42

So peaceful, and so beautiful. I know what you mean about the words, though...

The war cemetaries are always beautifully tended I believe and rightly so. And indeed what words can express the feelings at the sight of all those graves.

What is so extraordinary is the sheer amount of cemeteries around the world... all so beautiful and so tranquil. So far reaching.
Am reading Fugitive Pieces (cant remember name of author) which talks about the war in Greece. Your picture and post illustrate it perfectly.
Thanks for that.

There is nothing more sad and peaceful (ironically) as a military Cemetery in my opinion. Thanks for sharing this, I had no idea of its existence and that is a sad thing indeed.
Sandi

I'm so happy to hear that it was immaculate, it does make you wonder who takes care of it so wonderfully. It sounds like a beautiful spot. I have never been to a war graves cemetery, only seen them on TV, so your description of the atmosphere is lovely to read. A lot of the coverage this year has been WWI, and I have learnt so much more about it, sadly I didn't study this century in History at school, something which I think is very wrong, I think that all children should be taught about it, about how many young men gave their lives for us all.

I imagine that was a very beautiful place to visit. The men and women who have lost their lives deserve our recognition.

Have I lost it or did you rearrange your blog?

This certainly looks peaceful and it's fantastic that they take such great care of it.

Sandi - yes it is ironic that these cemeteries are so peaceful.

Mima - I think you are right about teaching children our history.

imbeingheldhostage - I have only made some additions to my blog list.