From South to North

Next stop - New Zealand. It is a big country of two islands. Stunning scenery from snow capped mountains and glaciers, turquoise lakes, fjords and waterfalls, hot springs and geysers to palm trees, sandy beaches and vineyards. It has it all. Most visitors concentrate on North Island or South Island, but we had to do a sprint through both islands, over the course of three weeks, as husband has family on both islands. Some go for the high octane sports, others for the wildlife. We went for the scenery. Here is a snap shot of our trip.

After Sydney we flew to Christchurch on the east coast of New Zealand's South Island. Here the recovery from the 2011 earthquake is underway. Below is the now famous cardboard cathedral 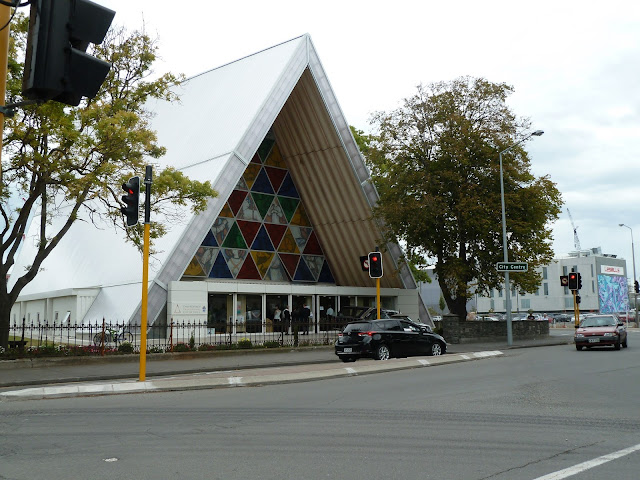 that has replaced the old brick cathedral which is currently a sad sight, while it is decided if the old building can be safely repaired. 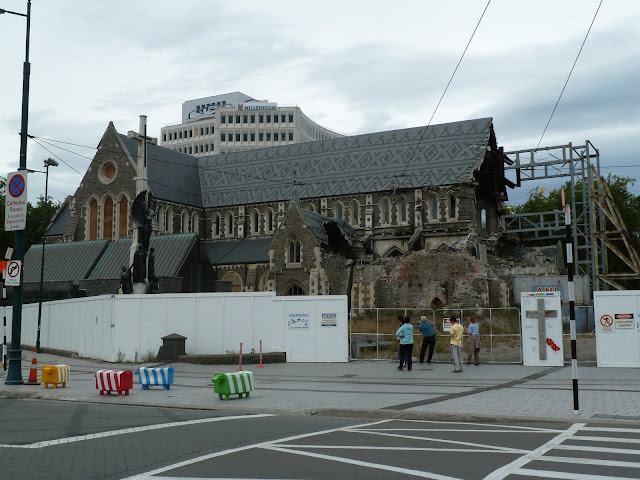 Leaving Christchurch we drove south west to Queenstown, stopping for lunch at Lake Tekapo - below. 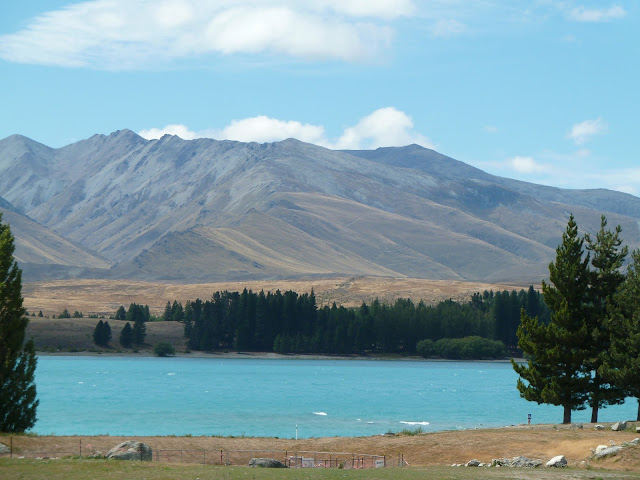 From Queenstown we went on a very long all day trip to the fjord of Milford Sound, which should have been all blue skies and sparkling water, but what we got was grey skies and heavy rain. The waterfalls from the cliffs around the sound were stunning but everything was so grey! 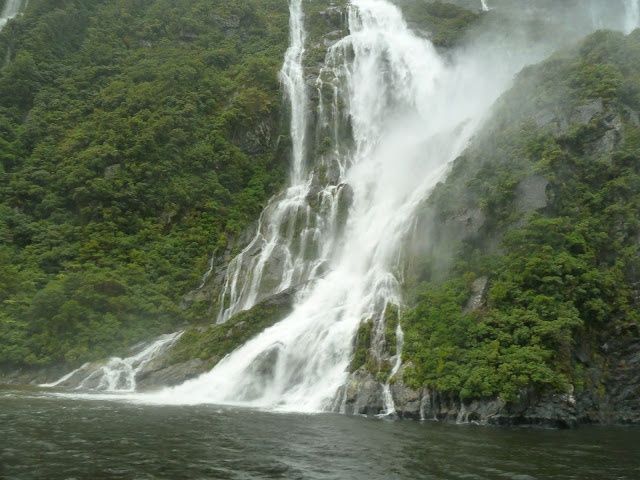 Next day, weatherwise, normal service was resumed we explored Queenstown itself and we took the gondola high above Queenstown to get this view of Lake Wakatipu. 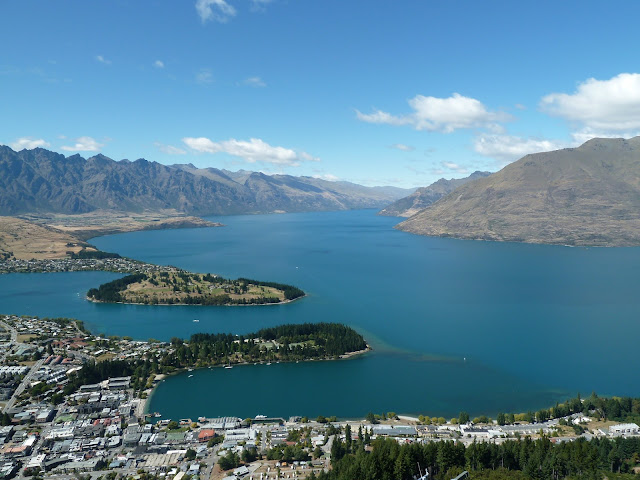 After Queenstown we travelled north up the west coast to our next destination of Lake Wanaka. On the way we stopped at Arrowtown, which grew up in the 1860s following the discovery of gold in the River Arrow. Today there are more than 60 of the original wooden and stone buildings, but no gold. It looks like a film set from a western. Pity about the cars. 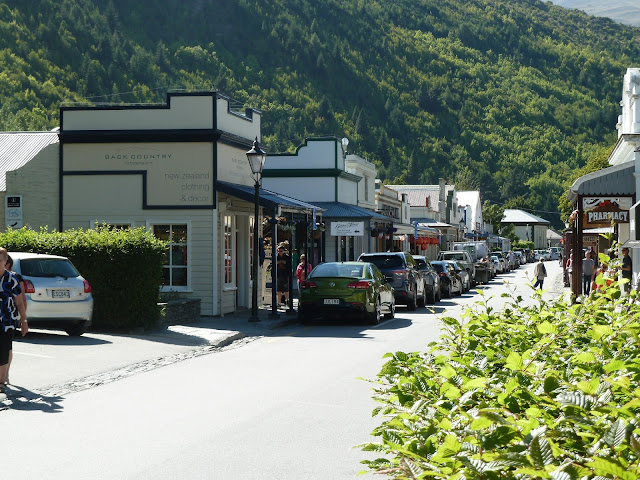 From Lake Wanaka we moved onto the Franz Josef Glacier, where the cloud base was almost down to ground level. Consequently the visibilty was poor and we did not see the glacier. Our next stop was Hokitika- another little town founded during the 1860s good rush, but not nearly as attractive as Arrowtown. The 2013 Man Booker Prize winning novel The Luminaries by Eleanor Catton was set here during the gold rush. We stopped on the way there at this treetop walk, which was quite a feat of engineering 20 metres above the forest floor. I found this a bit unnerving as it swayed around as we walked along, with quite a drop below us. 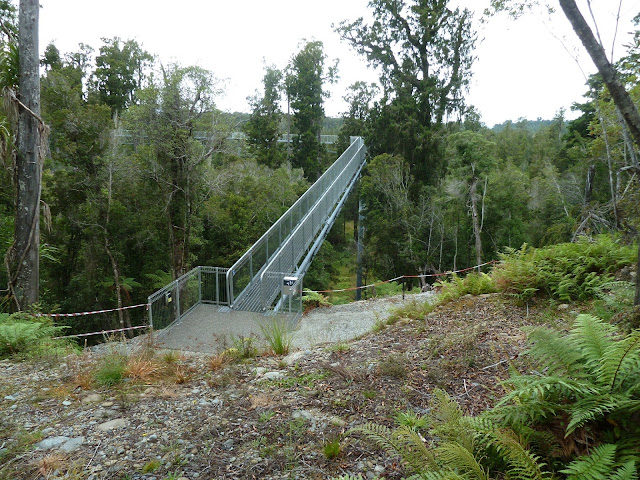 Then it was onto Nelson (below) in the north east of South Island. Here it was warm and sunny which was much appreciated after three days in the car and two cool grey days. 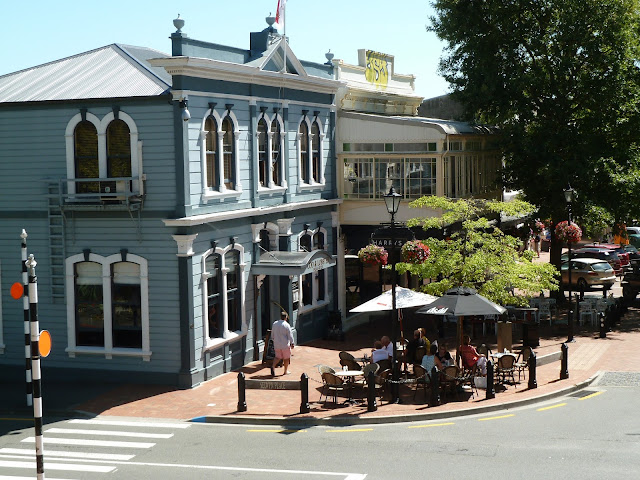 One day we explored Nelson and the next day drove west up the coast, stopping for lunch at Mapua waterfront - below. 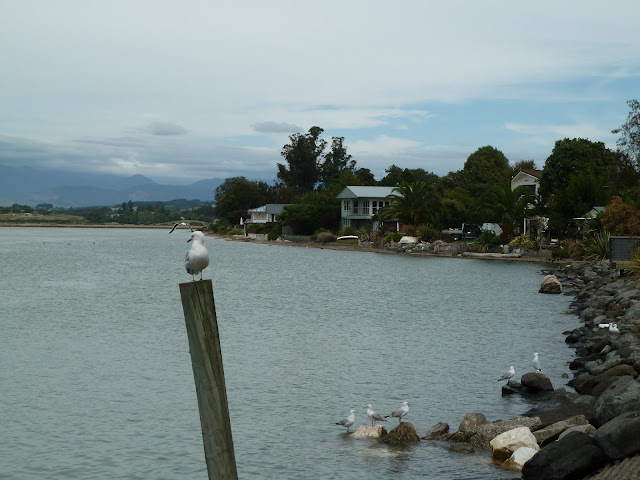 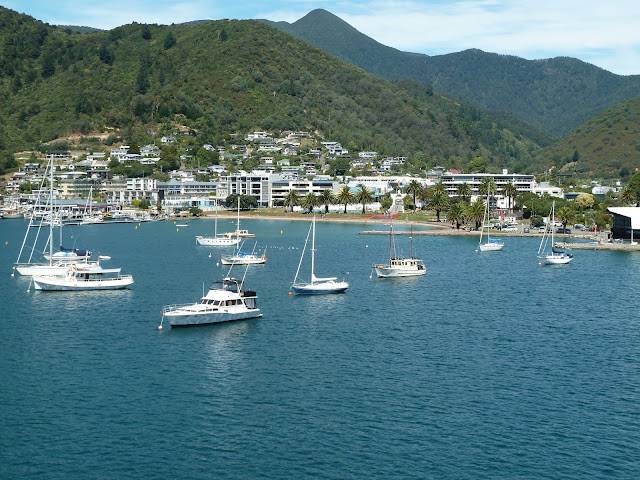 through Cook Strait and the Marlborough Sound to Wellington on North Island. We then  drove to Martinborough, where we stayed three nights in this impressive looking, but disappointing hotel. While in Martinborough we took advantage of being able to walk to some of the local vineyards and sample the wine. 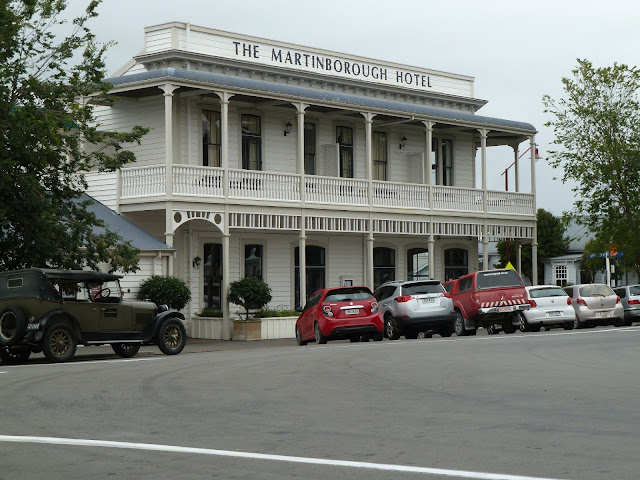 From Martinborough we drove north to the volcanic and geothermal area of Lake Taupo, which at 606 square kilometres is New Zealand's largest lake. Here we spent three nights staying by the lake, giving us two days to explore the area. We did a cruise of the lake during which we saw see these Maori rock carvings created by a local tribe in 1980 at an area known as Mine Bay. 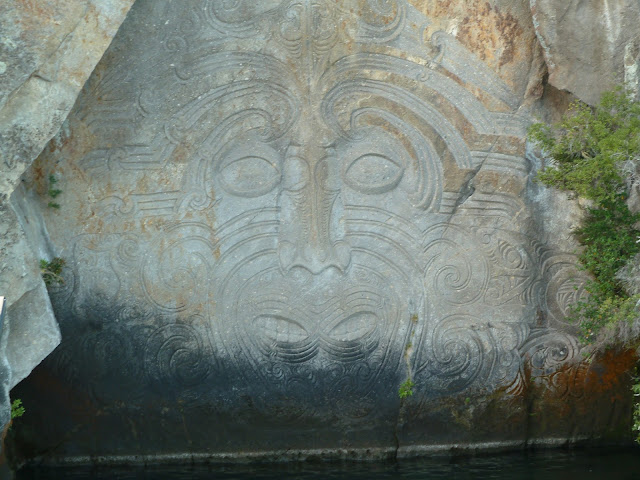 In the afternoon it was back into the car to investigate the area around the lake, which took us to the Huka Falls, where  New Zealand's longest river, the Waikato, is slammed into a narrow chasm dropping 10 metres into a surging pool. The roar of the water was deafening. 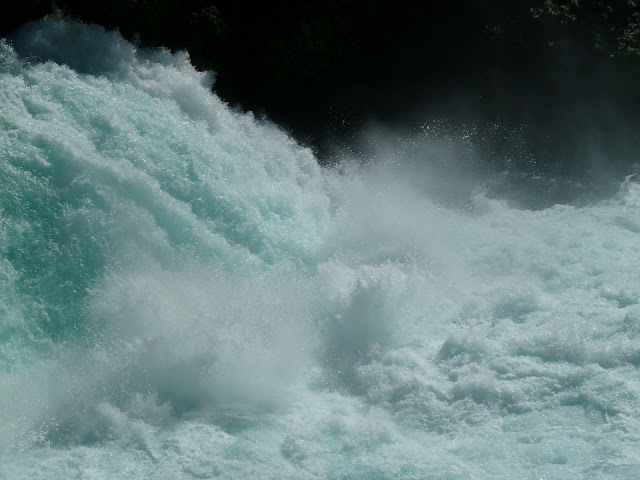 The following day we visited the amazing  Orakei Korako cave and thermal park. 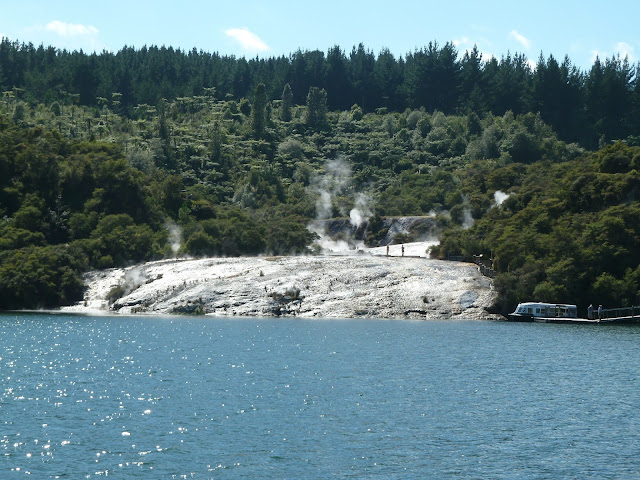 Initially a ferry took us across the river -  above, to a valley of hot springs 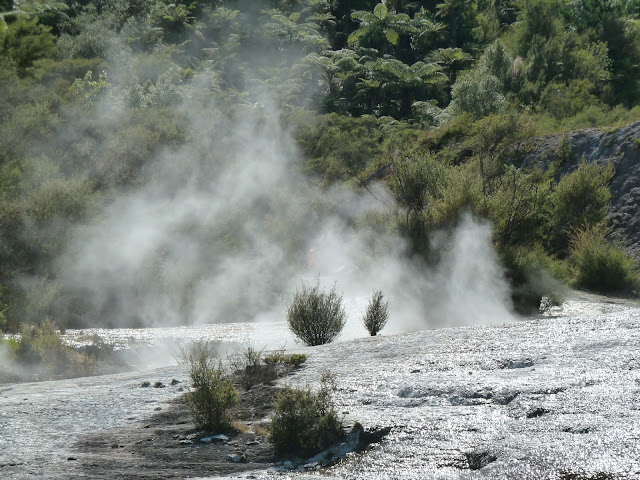 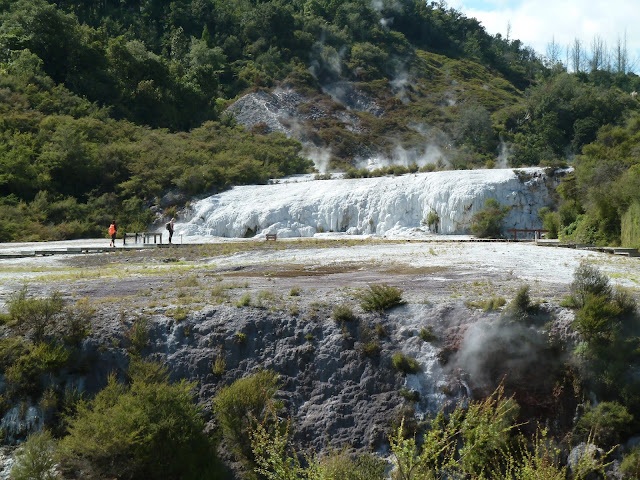 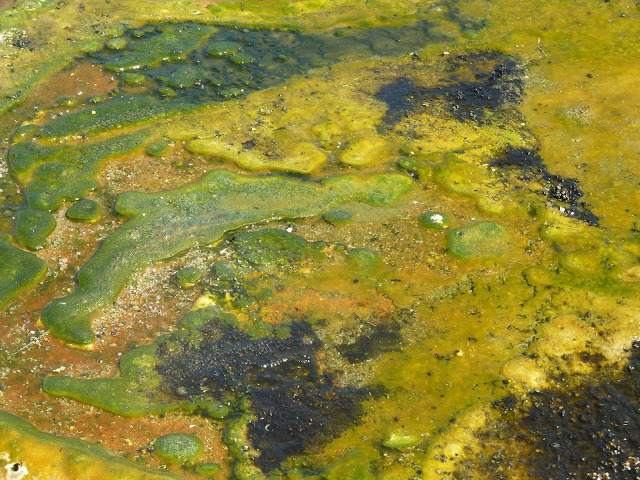 The next morning it was time to move on. We travelled north again, up the Thermal Explorer Highway to Rotorua where we again stayed by the lake, with its distinctive sulphur aroma. While there we had a very pleasant swim in the hotel's geothermally heated swimming pool. 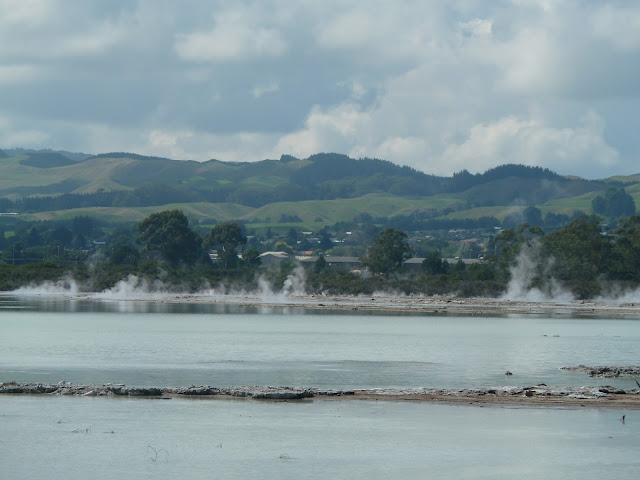 We only had one night here. Then we were off again. Up north to the Coromandel Penninsula and a two night stop in Whitianga, which gave us a day to take in some of the local scenery by taking the ferry across the harbour then walking along the coast. 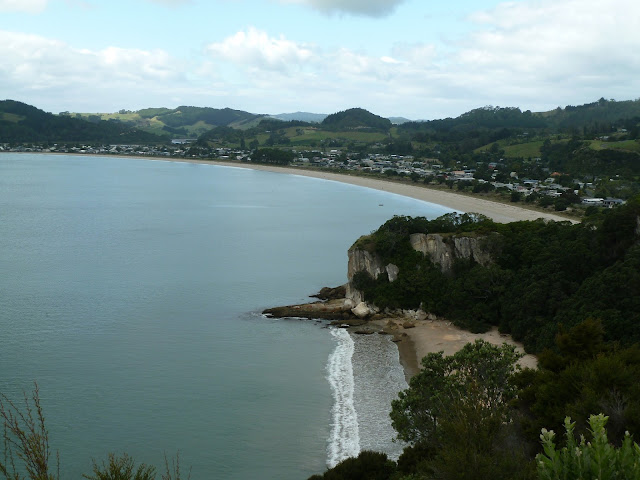 Now we had one day left in New Zealand. We  had a drive along the Pacific Highway which winds around the Coromandel Penninsula before heading to Auckland for an early flight to Hong Kong, via Melbourne the following day.

Wow, sounds as if you packed a lot in. I was rather sorry to see that there is still no idea of what will be done with the old cathedral in Christchurch. It had just had a restoration before the earthquake destroyed it so I suppose it must be a bit demoralising to think of starting work on it again. I love the turquoisey blue of the sea in some parts, it is indeed a most spectacular country and your photos give a good feeling of it.


Nice! I really enjoyed reading your post. Thanks for sharing and keep up the good work.
We Buy any House & Quick House Sale & Property Buyers