Down Under our first destination was a three night stopover in Singapore. I had never been that far east and was not sure what to expect. Our car journey from the airport to our hotel whisked us through what seemed to be an enormous building site, with lush patches of green. The buildings were mainly high rise flats or offices. Temperaturewise it was about 30 degrees Centigrade, with grey overcast skies. We had left home around 10 am on Friday morning and arrived in Singapore early on Saturday afternoon. Somewhere we had lost a night and with it our beauty sleep! Needless to say we did not do much that day. The next afternoon we were booked on a tour of Singapore, which took us down to the waterfront, where there are a variety of buildings, housing shops, offices, restaurants and bars. 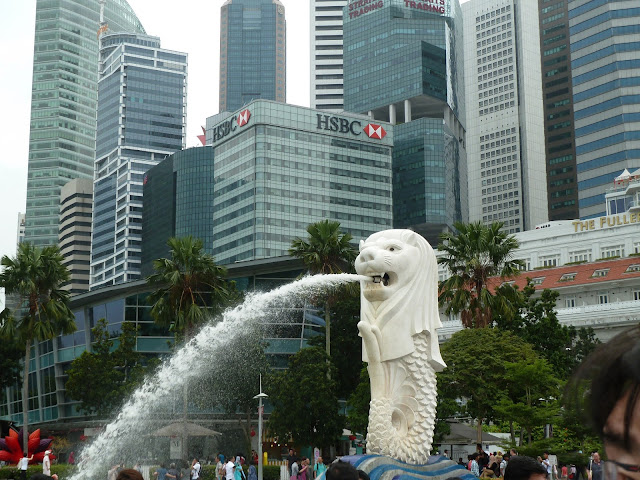 We had not realised that it was the Chinese New Year and consequently a bank holiday. It was heaving with people both visitors and locals. We just had time to take a few photographs before getting back onto the coach. 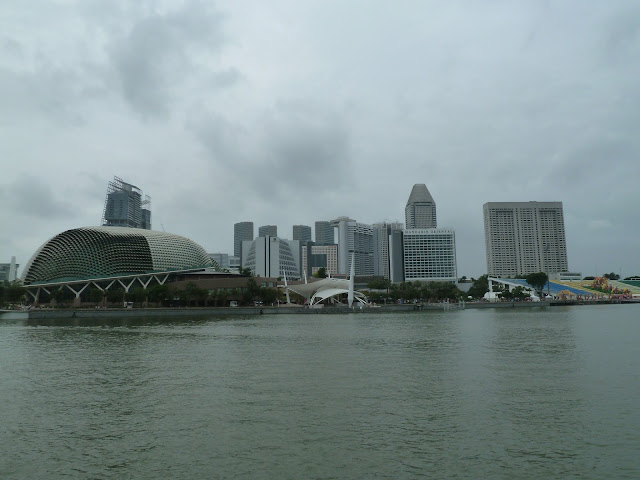 As it was the Chinese New Year we could not get anywhere near singapore's Chinatown, but we did manage a walk through the colourful Indian Quarter. 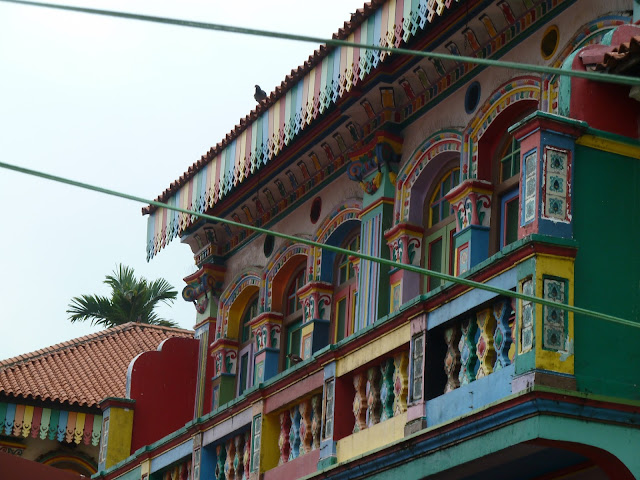 And then we were taken out of the centre to the Botanic Gardens, which are an UNESCO World Heritage site and include the National Orchid Garden. Singapore's tropical climate allows these immaculate orchids to grow out doors. 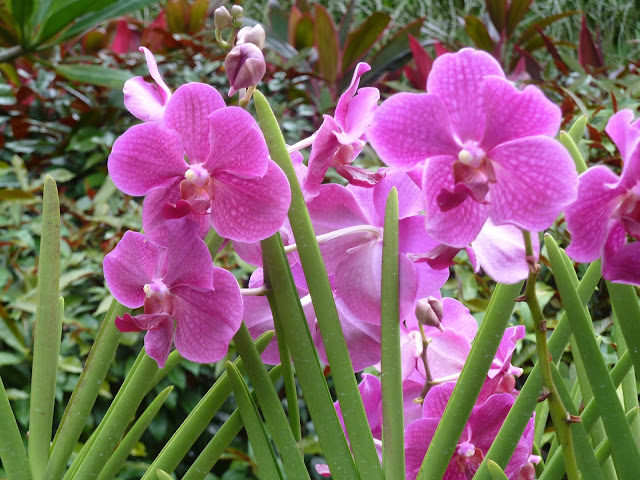 This was our first ever stopover and I know that we did not make the most of it, but the experience will help us to plan stopovers better in the future.

On the way back from Down Under we had a four night stopover in Hong Kong, which did not get off to the best of starts when Quantas left husband's suitcase in Melbourne. Things did not improve when he attempted to get Hong Kong dollars from an ATM at the airport, inserting his credit card instead of his debit card into the machine and consequently using the wrong PIN number, which meant that his credit card was locked and could not be unlocked until he got back to the UK. Our first evening in Hong Kong was spent trying to find M&S from the receptionist's vague instructions, so that we could purchase husband a change of clothes. I know that we should have packed some of his clothes in my suitcase, but he was not keen to do so. His suitcase did arrive the following day.

Once the suitcase had been unpacked we were able to set out into the damp,cold and grey Hong Kong weather. We were staying in the Tsim Sha Tsui (TST)/Kowloon area. Every street looks the same with the same shops. We eventually managed to find our way through Harbour City to Victoria Harbour. 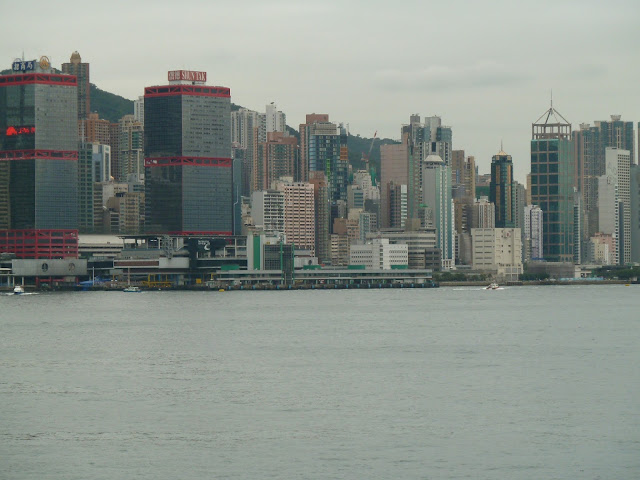 Hong Kong has more skyscrapers than any other city in the world. 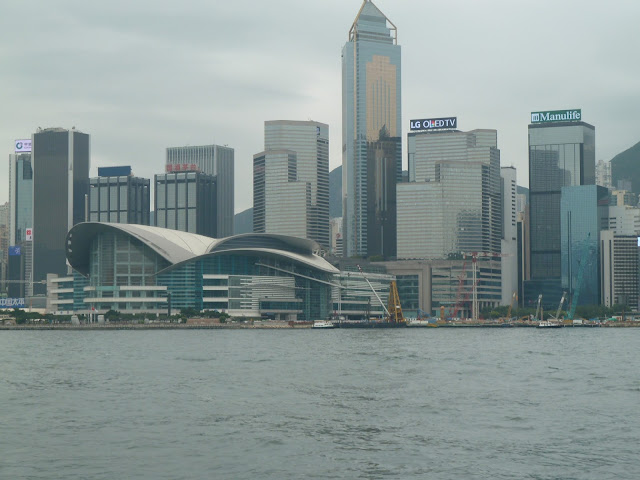 On our second day we were more adventurous and bought a 48 hour ticket for the hop on hop off bus which gave us access to three bus routes, the Star Ferry, which runs a shuttle service across Victoria Harbour between the TST and Central districts of Hong Kong, the Peak Tram, a harbour cruise and a Sampan ride. We did not use all of the tickets, partly because it was difficult to fit every thing in and partly because of the miserable weather, we did not do the harbour cruise or the Sampan ride.

The Peak Tram, Hong Kong's 125 year old thrill ride rises almost vertically up to the 552 metre high Victoria Peak - the highest point on Hong Kong island. On a clear day the view from the summit is spectacular , but this is what we got... 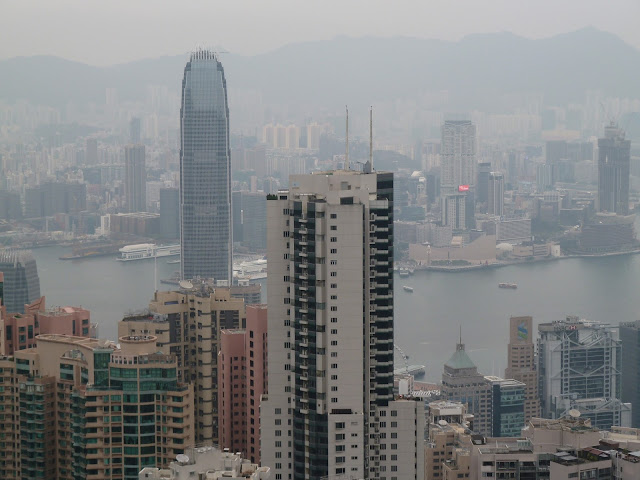 One evening we climbed to the top of the Harbour City shopping mall to see the 8 pm laser show, which happens every evening and lasts for 20 minutes. The visibilty was so poor that we gave up after five minutes.

Our final day in Hong Kong marked a special occasion, which I shall post about later. On the way there we walked through the HSBC (Hong Kong and Shanghai Banking Corporation) building and had to take a photograph of one the lions that sit outside. 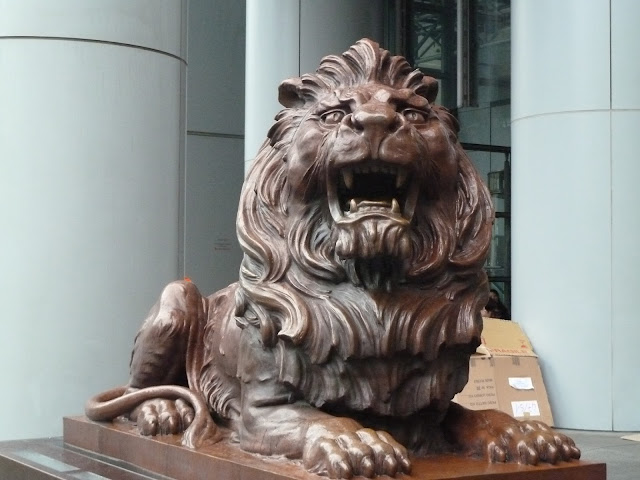 HK looks uninspiring. I have heard so many good things about it in the past, but perhaps it has become just too bland now. We had considered having a stopover there ourselves a bit later but might decide to give it a miss. The orchids in Singapore must be well worth seeing. A pity it was a busy holiday though. As I said in my latest post, one of the things I usually try to do at all costs is avoid busy times. What a difference it makes to one's experience. Unfortunately it's not always obvious when you are dealing with a different culture, as they have holidays that we don't celebrate.

Jenny - I am sure that both HK and Singapore look better with blue sky and sun. This was our first long haul trip with stopovers. Hopefully we have learned from the mistakes that we made on this trip.