Last week I was rather busy and did not have much time for thinking about my next post. So I have decided to take the easy option and show you some more photographs of our garden. I am not out of ideas for posts. Just short of time at the moment. These photos were taken a few weeks ago. I did try to take some photos yesterday but it was breezy and the flowers were moving around. Consequently all that I could manage to get was a series of blurs and this morning it is raining. 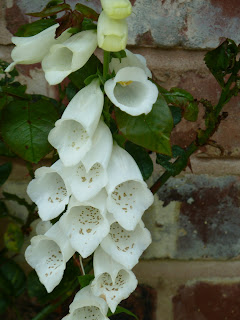 I am trying to create a typical English cottage garden to compliment our Victorian cottage. These white foxgloves are near the front door. I grew them from seeds that I collected and now in my haste to tidy the garden I have rather stupidly cut off the seed heads and thrown them on the compost heap.


Also in the front garden is the frothy Lady's Mantle or to given to her her proper name alchemilla mollis. It is a plant that no cottage garden would be without but she is one of the most promiscuous of plants seeding all over the garden if  the flower heads are left too long. As a consequence it is all over the garden and is a very useful space filler especially for the front of borders. 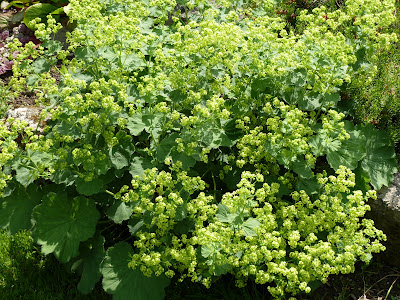 Another  plant that is found all over our garden is erigeron commonly known as fleabane.  This particular plant is the grandchild of one that was growing in garden of our first house. It spreads prolifically and is easy to propagate. The mauve colour contrasts or co-ordinates with practically any other colour which explains why it is all over our garden and it is another useful front of border filler. 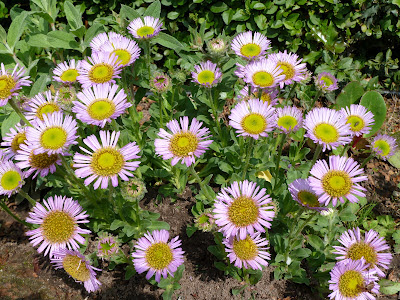 Lavender is another plant that no cottage garden would be without. I have several different varieties around the garden. I am not sure which variety this is. 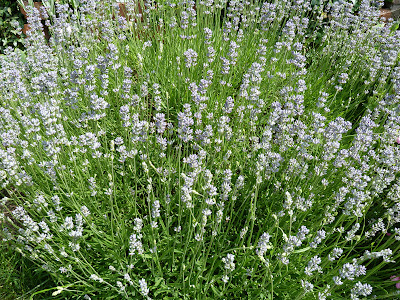 The soil in our garden is alkaline which means that we struggle to grow acid loving rhododendrons and azaleas but the upside is that we are able to grow wonderful blowsy paeonies. There are several around the garden. This is probably the most spectacular. When we moved here this sun loving plant was hidden in an shady, overgrown border. With tlc and the help the sun it has matured into this beauty. 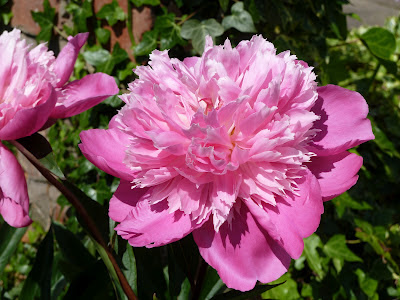 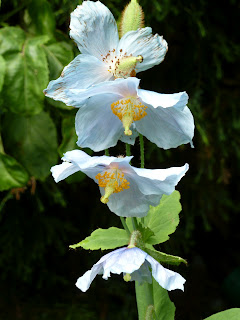 Moving out of the sun into the shade this blue poppy or meconopsis which I grew from seed hides itself under an old apple tree. It is a shade loving plant and it was a struggle to find a suitable spot to plant it as all of our south west facing garden gets the sun at some point in the day, providing it is sunny.

Round the corner from the blue poppy is this campanula glomerata alba which was also grown from seed. It prefers partial shade which it gets from early afternoon as the sun moves round. It is in a bed of white flowers which I am developing in an area of the garden that is in the shade in the afternoon. White really stands out and sort of glows in the shade. 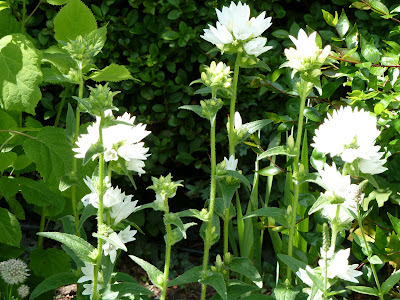 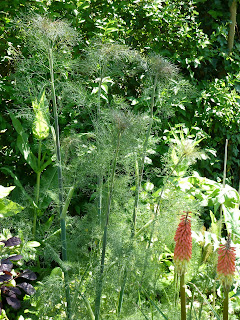 On the other side of the garden in an area that gets the late afternoon sun is the shrubbery. Originally this was a dumping ground for plants that there was not space for anywhere else in the garden. Now I have started to develop it into something more. Here we have fennel which I grow for its feathery foliage with red hot pokers or knifophia n the foreground.

Then further along in the bed with no name is this lovely red rose. I do not know its' name. Either it was in the garden when we bought the cottage or we acquired it as part of an offer. 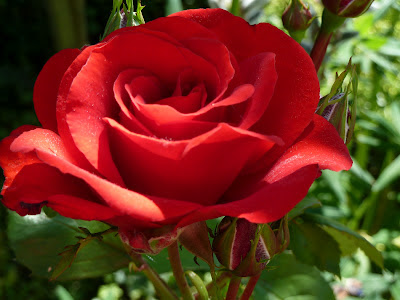 Considering how unkind the recent weather has been to these plants I am amazed that they have put on such a good show.
Posted by cheshire wife at 12:20

You have some beautiful plants in your garden! :)

Hello:
As you say, your garden is looking in remarkably good heart considering the devastating weather with which you have been tormented for months.

Alchemilla Mollis is, in our view, an absolutely indispensable plant.It combines beautifully with all manner of other plants, it adds wonderful texture to any planting scheme, it is easy to grow, forgiving of harsh weather conditions and is rejuvenated rapidly if cut hard back after flowering. Definitely one in our top ten! Yours looks wonderful!

I do agree about white flowering plants in the shade....and I envy you your meconopsis.

You have a beautiful array of plants in your garden.

Certainly worthy of posting about!

Akelamalu - we also have weeds.

Jane and Lance - you can have too much of a good thing.

Leon and Sue - it is a pity that they do not last for longer.

fly - the meconopsis were a challenge to grow.

Gaynor - I am always busy.

This is so beautiful. You're doing a wonderful job with the garden. Hope the cottage is coming along as well.

Your garden looks beautiful. Your photo of Ladies Mantle finally gave me the name of a plant I have often wondered about.
The blue poppies are gorgeous. I have sometimes had to grow them and had no luck. I'm not really much of a gardener, even though I try hard! :)

Leon and Sue have said it all :-) Beautiful photos. Take care Diane

Rob - the plants are doing the hard work. One room left to decorate in the cottage. Then we start again!

Jenny Woolf - keep trying. It took me a while to succeed with the garden.

Diane - it is the subject matter that is beautiful.

The peonies are beautiful, but my favourites are definitely the roses - such a lovely, delicate flower.

I'm a bit pushed for writing blog posts now due to the summer holidays - photos and videos are always a good alternative.

I so love this post. Thank you for taking me on a walk of our garden. So many beautiful flowers, but that r. ed rose. A sight to see.

I totally understand how the soil can mess with what you want to grow. In my Texas USA soil, I can't grow many of the plants I grew up with in a much more norther climate. I am learning compromise, but I definitely miss the lilac, peonies, clematis, rhubard, and annual verbena I grew long ago. Tradeoffs, I suppose.

your garden, I meant.

Cracking plants but why are other peoples pictures so much better than mine!

Your gardem is beautiful but its the foxglove I love most of all...since my surgery in April I've been housebound and next spring and summer I look forward to my flower gardens most of all...thanks for sharing yours
Sandi

Midlife Jobhunter - as a child I did not pay much attention to our garden, which I now regret.

GOK - I can't explain your dilemma.

Sandi - there is something special about white flowers. I hope that you are making a good recovery.

I am so glad you decided to do a post of garden photos, as you know the garden is something I love and I do miss English cottage gardens. Yours is looking lovely.

We have naturally acid soil here in the Willamette Valley. Good for many things. I don't bother with the peonies, because in my experience, peonies cause hail.

LindyLouMac - yes, we are kindred spirits.

Murr - fortunately we do not get too much hail, but the rain this year spoilt the peonies.

thanks for sharing this types of blog..

thanks for sharing this types of blog..