Flying below the belt

A day or two before we were due to go to the Lake District an e-mail was sent to husband from one of his Village Hall committee friends. The sender was going on holiday and was going to be unable to deliver some flyers (the village news letter) to what he termed the village outposts and asked husband to deliver them for him. Husband responded that we were also going away for a long weekend and it would be difficult for us to deliver them. At this point we were not sure quite what was intended by the village outposts. It was possible that it was just the half dozen houses around where we live on the outskirts of the village. So reluctantly after an exchange of several e-mails, husband, sort of, agreed to deliver the flyers in the hope that it was just the half dozen houses around us. We had not received the flyers by the time that we set off for the Lake District on the Friday morning and were hoping that another more willing committee member had been found to do the delivery. I thought that this was all a bit below the belt, as earlier in the year a social event had been cancelled when all the committee members scheduled to run it decided to go away.

Over our weekend in the Lake District we forgot all about the flyers. Consequently we were rather surprised when we arrived home to find that 100 flyers, plus delivery instructions, had been pushed through our very stiff letter box. I made it quite plain to husband that I was not delivering them on my own and that I had a busy schedule planned for the week ahead. As I saw things our options for the 100 flyers were to shred them, dump them or return them to the sender. Husband said  that no, we would deliver them although even he could not see when we were going to be able to do so. The following Saturday morning he bumped into the chap that normally delivers to the outposts. He had had an operation and had not been able to drive, hence the reason that the sender had been lumbered with them. Anyway he was now able to drive and offered to deliver any flyers that we could not manage.

That Saturday afternoon was damp and miserable after a very wet Friday night, but it was dry. Togged up in anoraks and boots we set off in husband's car to deliver as many flyers as we could.  Dodging the puddles and the mud, I did one side of the road and husband did the other. We ended up in roads and lanes that I did not know where there, delivering to houses that I did not know existed. We probably delivered to houses that we were not supposed to! I quite enjoy seeing what I can through front windows. It's a licence to be nosey. Also it is quite interesting looking as people's front gardens. Sometimes I get ideas. I was surprised how untidy some people are. Just leaving toys and garden tools cluttering up the drive. I know that we have had a lot of rain, but, oh the weeds in some of the gardens! It took us two and a half hours to deliver 73 flyers, which left 26 undelivered and one flyer for us.

Almost two months later the 26 undelivered flyers are still sitting in our hall waiting for husband to take them to the chap who normally does them or for him to collect them from us. I do not know what husband arranged. Now it is hardly worth the bother of delivering them, as most of the events have happened. 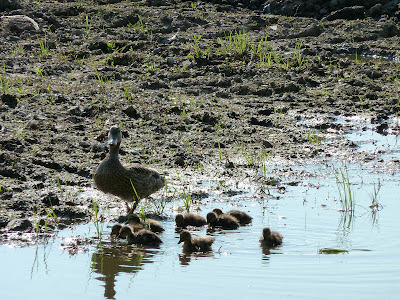 Here are the parents. 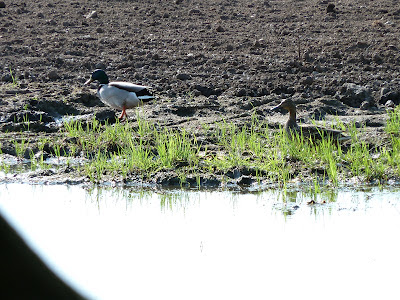 Once they realise that I have seen them they scuttle off to the established pond on the other side of our garden. 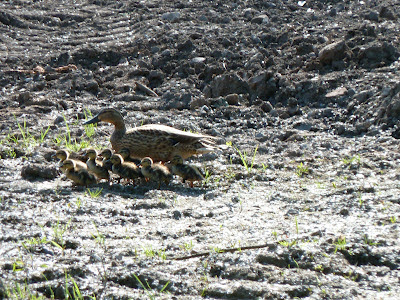 And here they are enjoying a swim back in the main pond. 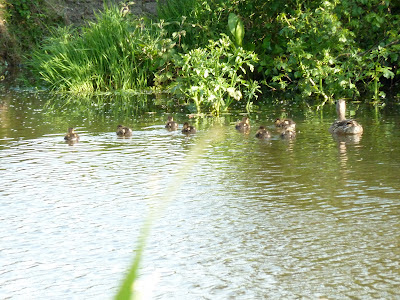 I have not seen them recently. I expect that they have flown the nest or maybe it just got too wet for them. Anymore rain and I shall have webbed feet too!

Now  that Wimbledon Fortnight and my flower arranging class have finished I had hoped to get back into blogging, but I have been foiled again. We are going away for a few days at the weekend.
Posted by cheshire wife at 21:10

Sounds like there needs to be a better system for delivering flyers with more people involved. Quite often it is all left to just one or two faithful people who always seem to be doing this kind of thing by themselves. If everyone got involved then they could just deliver 20 each!
Loved the duck photos.
Maggie X

Condolences on the delivery bit. The "joy" of volunteering.

The ducks are so sweet. We saw a momma with her babies in a pond this morning (see my birdwatching note on my blog about today's drive in the country). Much better to check the ducks than do much else. We had Canada Geese in the river just below our apartment building, but I never found the nest. Though I did see mom an a few babies on the water last week.

I know what it is like getting stuck with a job like that. Not fun. Jealous that you did see some new ducks this year. We had no new ducks or geese. Lots of quacking go on out there, but babies.

Have fun on your trip.

When I got down to the photos, I thought you were going to say that, when you looked more closely, you noticed that the ducks were sitting on a pile of newsletters. ;)

For years when hubby worked for a local authority we spent weeks delivery Register of Electors Forms in an area of Bolton and then trying to collect the completed form in. I was so relieved when he stopped volunteering to do it. I say volunteering but we did get paid, which is why he kept volunteering.!

Maggie - I think that the committee is stuck in a rut, but I am not the one to sort it out as husband is already on it.

Rob - we did not volunteer and have never done the flyers before.

Midlife Jobhunter - it will be good to get away at the weekend.

Jennyta - perhaps I should have given the flyers to the ducks for their nest.

Akelamalu - I could have used those two and a half hours to do a lot of other things.

I used to canvas votes at elections and it was fascinating to catch a glimpse of other people's lives - and attitudes - but at least I did it because I wanted to.

Being lumbered with the consequences of someone else's incompetence I can do without.

If you are ever short of some local stone we always have some lurking around here in Thornton Hough...if I can find it in the mud.

What lovely duck pictures! and what a commentary on the weather, well I suppose ducks like it! :)

Delivering flyers is something I occasionally do. Luckily it's just the local three streets but the houses round here are mostly converted in to flats and there are all kinds of funny little doors without letter box slots even, up and down flights of stairs... makes me sympathise with the postmen I can tell you!

Fly - I am looking forward to the weekend.

Thud - we have some spare stone thank you.

Jenny - I know what you mean about sympathising with the post man.

Memories of arranging deliveries in a rural village had me empathising with you!