I seemed to be packing everything but the kitchen sink. Two umbrellas, winter boots, anorak with hood and sunglasses - well you never know the sun might just put in an appearance. When we planned and booked last weekend's break, about a month ago, the weather was awful but we never expected that it would be nearly as bad by the time the weekend came around. We were late setting off, not managing to leave here until after lunch on the Saturday. We had decided that we would make a detour via Abersoch (otherwise known as Chester on Sea) on our way to Aberystwyth, to see what we were missing, as we had never been. It was the middle of the afternoon when we arrived at Abersoch and it was heaving. We could not park the car and there were so many people around that we could not really see the place. From what we did manage to see it did look quite attractive and I could not help but notice several expensive shops. Having made that detour it was late afternoon or early evening really by the time that we arrived at our destination on the outskirts of the Welsh coastal market town of Aberystwyth. We were staying in a Grade I listed mansion which has been renovated and restored and recently opened as a country house hotel. If it had not been for our sat. nav. we would still be driving around trying to find it as it was off the beaten track with absolutely no signs to it. Our late arrival meant that we had no time to explore Aberystwyth leaving us with little choice but to eat in the hotel that evening.

Sunday morning dawned bright and sunny for a change and Aberystwyth beckoned. First we went for a walk along the promenade. 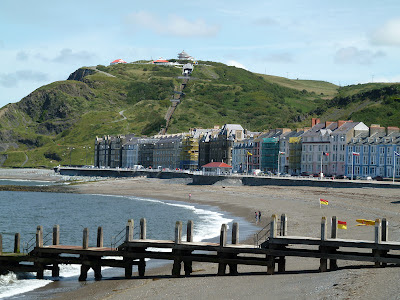 Then we had a quick look around the town before setting off up the coast to Borth where we had lunch. In the afternoon we drove down the coast of Cardigan Bay. After visiting Aberaeron by mid afternoon we found ourselves in the fishing town and seaside resort of New Quay where Dylan Thomas reputedly wrote Under Milk Wood. Here we enjoyed a walk around and an ice cream in the sun. 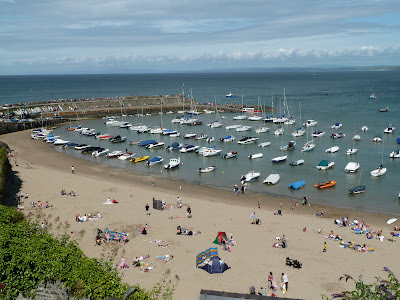 By evening it was damp but we ventured out to dine in an Italian restaurant  in Aberystwyth.  Monday  was a very wet day. We drove up to Aberdovey where it was so wet that we did not even get out of the car. Cloud and rain looks pretty much the same wherever you are. After more driving around, in the hope that the rain would stop, we ended up in Dolgellau where we had lunch. Then having had enough of the rain we called it a day. Luckily by the evening the rain had cleared and much to the disgust of the hotel staff we went into Aberystwyth and ate at a Greek restaurant at the end of the promenade. We awoke to rain again on Tuesday. So it was a damp drive home.

We are gluttons for punishment. Our little break did not end there as we had tickets for the RHS Tatton Park Flower Show on Wednesday. Again the weather forecast was bad with heavy showers and possibly thunder storms forecast. The RHS website said that the show would go on regardless of the weather and suggested that visitors brought wellies and umbrellas. Just before we were about to leave on the Wednesday morning the heavens opened here and husband's resolve weakened. He was concerned that his car would get stuck in the mud in the field that they use as a car park. Anyway, the rain eased and we duly set off with our wellies in the boot. Tatton is about 40 minutes from where we live and we soon drove out of the rain. The car park was fairly dry considering the amount of rain that we have had. So husband was worrying unnecessarily. We decided to leave the wellies in the boot but carried our umbrellas with us, as the sky was grey and threatening and there was a chilly breeze. Once through the gate we forgot about the weather and enjoyed the show, which was televised by the BBC. We did not spot any of the presenters but did see this film crew attempting to film one of the gardens with visitors getting in their way! 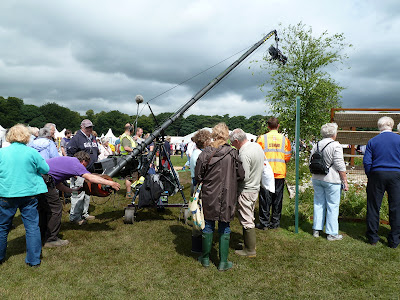 This afternoon we went to a garden party by the river in Chester. So another wardrobe dilemma. The morning was sunny with a cool breeze. What should I wear so as to be not too hot or too cold? Would it be more or less sheltered by the river? I played it safe. I did not want to be cold.
Posted by cheshire wife at 19:15

We are hoping to go over to the coast (probably Barmouth) in 2 weeks for a long week-end, in the hope that the weather will be reasonable. We HAVE to have some halfway decent weather soon...!!

Jennyta - we had a good day here today. I hope that you have better weather for your weekend than we had.

It's not surprising the difference that good weather makes to any trip.

Weather in France is wonderful at the moment.Fingers crossed that it will remain so and that you get some decent weather in the UK especially for the Olympic Games.

Seems like a delightful outing! And hardy souls that you are, your were undaunted by inclement weather.

Thanks for sharing the adventure.

Gaynor - you are right. Grey weather an make even the prettiest place look drab.

Rob - we have to be hardy otherwise we would become hermits!

What a shame Abersoch was so busy when you visited - it really is a beautiful place, we have spent many a happy holiday there.

Summer this year has been a washout hasn't it? Saying that we spent a lovely afternoon in the sun yesterday at the East Lancs Railway (we live very close), so much so that I have Panda eyes because I had my sunglasses on all day! LOL

Let's hope that that ws the last of the foul weather...and what did you decide on for the garden party?

Akelamalu - being over run is on of the problems of these pretty coastal villages.

I think you were on holiday the same week as us - if obnly we had chosen this week - and gone down South!

This summer has been a complete washout and anyone who has managed to have a holiday and enjoy nice weather has been very lucky indeed. We went for week in Cornwall, last week in May and managed to get mostly cloud..

Small world, my sister lives in Tywyn not far from Aberdovey, nice litle place but not in the rain. Tatton Park we also know as our daughter used to live in Knutsford!

debs - no need to go down south. It has been OK here for the last few days.

Technogran - we went to Cornwall in June last year and had rain. It must be us!

LindyLouMac - nowhere is nice in the rain.

The weather has certainly been trying this summer. At the moment we are enjoying hot, sunny days. Let's hope they last for a while longer.

I'm sorry that you missed the good weather when you went away.
I can remember Abersoch as being a beautiful place when I was young. It has probably altered greatly by now. You said it was very busy! It was a smaller place when we went there.
Hope you are enjoying the present mini heatwave.
Maggie X

SJA - we can hope for sunny days but we had rain here this evening.

Maggie - perhaps visiting Abersoch on a Saturday afternoon was not the best of timing.