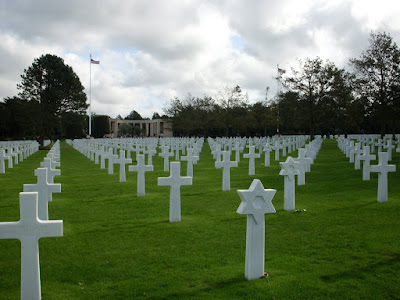 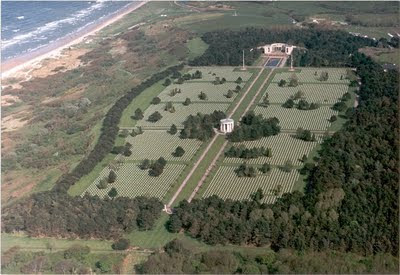 the crosses bear only their name and the date of their death. Even on a grey and windy day the cemetery looked immaculately groomed with the usual silence of a cemetery being broken only by the waves of the English Channel breaking on the beach below. This satellite photo shows the sheer size if the cemetery. We had not known quite what to expect as the only other war cemetery that we had visited was at Souda Bay on Crete, which is much smaller.
Posted by cheshire wife at 06:00

I can remember stopping at a similar site when we were on a coach tour through France to Italy. It was just as you described..... bright white crosses and I can remember standing dumbfounded at the immensity of the deaths.......... and that was just one tiny place.
We should be ever so grateful always..... for our freedom and the sacrifice they all made.

Whoever keeps the graves and grounds neat and tidy deserves a huge thank you. We need to be able to see the terrible cost of war.

It must have been impossible to have been there and not felt caught up with the emotion of it all. So so sad.

I felt humbled when we visited the cemetary in Kanchanaburi, Thailand where the bodies of many victims of the Death Valley Railway are buried. It broke my heart to read the names and ages of the fallen.

We too have visited the very place a few years back. Did you visit the Church that is painted blue inside, The name escapes me, at present.
I think there are dedications to the local fishermen who lost their lives during the liberation of the town. The Pegasus Bridge comes to mind too.

May all the brave souls who perished in the conflict,
RIP.

What a breathtaking and poignant tribute to all those servicemen who lost their lives.
I am humbled and grateful everyday for their ultimate sacrifices.
God Bless them all.

It is a jaw dropping sight isn't it!!

May they never be forgotten. A touching post for yesterday's Remembrance Day (as it's called in Canada). Thank you.

A fitting and beautiful post! And very humbling when you consider all those who have sacrificed so much for us...I'm awed and grateful! Thank you, dear CW! Have a wonderful week!! God bless you!! ~Janine XO

A thoughtful post, CW. And thanks for the pictures.

I have an uncle buried near Boulogne -- WW1 soldier. I don't think I'll ever get to see the grave, but I know where it is.

wow. It just stops you in your tracks doesn't it.

Your post was moving, illumianating.
The older I get, the more important it seems that we remember..
Carol Ann Duffy's new poem is fantastic.

The War Graves Commission do wonderful work maintaining these places as memorials to the sacrifice of the fallen, each a loved family member in a foreign land. We visited the graves at Casino in Italy, so very moving.

Fabulous, fabulous captures . . . want to go see for myself now!!

Such a sad post...brave men and women we honor each year...sadly...
Sandi

Thanks for your latest comment on my blog - your skating days may be over, but mine have never even begun! (I don't have an email address for you, so had to resort to a reply here.) :)

Well, to be honest, I didn't know anything about that place... I guess I will find more info throughout Internet (Wikipedia must be the first source, indeed) because I really need this data to improve my own blog.

Well my eyes are not able to see very far, so I couldn't do pretty much with this stuff. Since I started to take generic viagra my problems began.