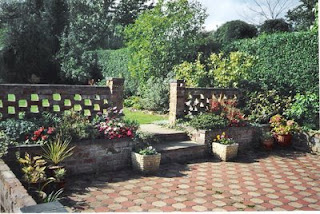 We had a brick red, black and beige tiled patio at the back of our house. It looked very nice when it was clean and the sun shone on it, but it was difficult to keep clean because these tiles were internal tiles. They had been out there for about 25 years and had lost their seal. As a result of the building work which was done nearly three years ago, we now have a larger patio, some of which is currently bare earth and weeds. We didn't think that we could match these tiles and I didn't particularly want to, so we decided to see if we could sell them to a reclaim yard. If we could get something towards the cost of the new patio, all well and good, and I don't like to throw away things that are still usable. We had never been to one of these places before and it was a real eye opener. They make Steptoe's yard look tame and you can buy almost anything there, except clothes and food. We could have spent hours wandering around them if we had been interested in old slates, bricks, railway sleepers, knobs,chimney pots, statues, fire place surrounds or even companion sets. Eventually we found one that was interested in buying the tiles from us and in the process discovered that we could buy new paving stones from them, for about half the price of what we had it in mind to pay. A deal was done and it was up to us to take up the old tiles. To be honest they are not giving us a lot for the old tiles, but everything helps. 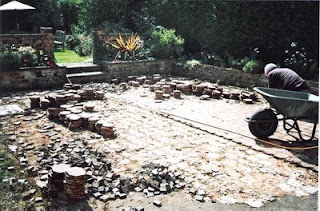 My husband cadged some crates from one of the neighbours and set about lifting the tiles. Some came up easily, others were cemented down as if there was no tomorrow. It took most of Saturday and Sunday for the two of us to lift the tiles, ferry them round to the front of the house and stack them in the crates. By the time that we finished on Sunday we both were aching in places we didn't know existed and exhausted from working in a sun trap on the hottest day of the year. Now they are all ready for collection and it is good to think that they will be going to another home. Apparently the tiles were in Chester library before they were laid at the back of our cottage. I wonder how many lives does a tile have?
Posted by cheshire wife at 18:31

Can't wait to see the photos!

Makes me think of Roman mosaics - what have those tiles witnessed in their lifetime? I wonder where they will go next?

How interesting! I wonder what all those tiles have seen over the years!

It was SO hot here at the weekend, was it up there too? If so you had a very hard job to do in those contitions!

I like the sound of those tiles - how did you find out they were from the library? I won'ty ask if they'd been stamped...

I bet the fine due is enormous!

just to say - our village hit by lightning strike - all computers out!

Dottie - you are so right, when we were taking up the tiles I thought that it looked like a Roman ruin.

Suburbia - yes it was hot & we both felt a bit the worst for wear on Monday.

Deb - the neighbour said that they were from the library & no they weren't stamped.

Dotterel - if a fine is due the previous owners can pay it, they saddled us with enough problems without paying library fines for them.

Lindsay - hope you get reconnected soon.

my first thought, photo's.....great that you are reusing rather than buying new.

We gave our old flags to a lady with a stables who does lessons for disabled children. Isn't it great when you can reuse stuff?

Gill - photos now added. Thank you for your kind comment.

I love those tiles - glad you were able to put photos on the blog.