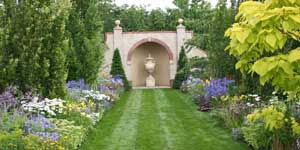 Yesterday, we left behind the flat area of west Cheshire that we live in and went over to the more attractive east side of Cheshire. There in the Knutsford area, large houses lie set back from the road in leafy green lanes reminiscent of the area of Surrey that we once lived in. We were off to Tatton Park Flower Show. As we are RHS members, my husband decided that we would go on members' day, then wondered why the tickets were so expensive. Determined to get our moneys worth we spent five hours walking around the show gardens, marquees and stands. It is not a place for the faint hearted. It took 15 minutes to walk from where we parked the car to the show entrance. The weather was kind yesterday. It was mainly light cloud with sunny intervals but my husband still managed to come home with a red face from the sun. Everywhere that we looked boxes on wheels stuffed with plants were being pulled around. We were very abstemious and bought only an automatic window opener for the greenhouse, to replace the broken one and a turtle mat, which is supposed to absorb all the dirt and wet, off shoes with one wipe. An essential if you live up a muddy lane, as we do and have a new hall carpet. I resisted the temptation to buy plants, instead noting down the names of the plants that caught my eye. I don't want to spend hours carrying around plants, worrying that stems might get broken and flowers squashed.

It was well worth the effort to spend a summer's day in garden heaven. The show gardens were all interesting and attractive. But the absolute star of the show was Chri 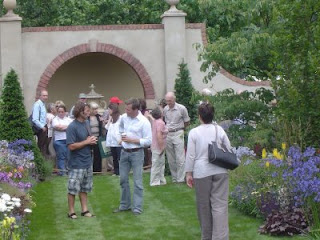 s Beardshaw's garden Celebrating Cheshire's Year of the Gardens 08, which won a gold medal and was Best in Show. He ( mr sex on legs) was there in the garden. I could have spent all day looking at his garden with its' informal planting, which included the white daisies and pink cranesbill geranium which would take over our garden, if we let them, and I would love to look out of my kitchen window onto it. Some of the other gardens were pleasant to look at but their more formal planting meant that as soon as a weed appeared or there was a dead flower head you would need to be out there tidying up.

The BBC was busy filming and we saw all three of their gardening show presenters around the show during our time there. There was Carol Klein having a bad hair day as usual and inappropriately dressed in a red coat on a hot day, Joe Swift not much hair wearing a hat and Rachel de Thame who looks even more attractive in the flesh than she does on television.

Today I am back to looking at our still under construction garden, with a lot more ideas.
Posted by cheshire wife at 12:34

Glad you had a good day out. It looks a lovely place from the photo you posted.

I LOVE Tatton Park. Got some happy memories of time spent there.

I haven't seen much about the Tatton Park show on TV yet - there'll be even less about the Southport show in August. And yet we get a full week on Chelsea and Hampton Court

My sort of show. I have a keen interest in gardening!

The mat sounds good!
Must admit I love Gardner's World!
I've been pottering in the garden myself today. Painting some wooden furniture. Looks a treat!
Hello via David,s blog.

I would have loved to go. I love a good flower show!

I keep meaning to go to this as I only live 10 mins away, but I never get round to getting tickets so I just watch it on TV. Getting lots of ideas for my garden though.

It looks beautiful. We have in the past been to meet Max and Millie at the Garden show in Ayr. The sights are wonderful, but the scents are just heavenly.

Where's the photo of Mr Sex on Legs then?!