When we were not at the airport on our recent trip to South Africa we were staying in a variety of different types of accommodation while travelling along the Garden Route in a hired car.

Our first taste of South African accommodation was in Cape Town, where we stayed in the same hotel that we had stayed in three years ago. Then we were very impressed. This time we were not. Everything had gone downhill. When husband had booked it he had advised the hotel of the time that we would be arriving. Given that we were from the UK they should have realised that we would probably have travelled overnight and would be tired. However, our room was not ready. They offered us a complimentary coffee, but I was so tired and annoyed I almost burst into tears. When we eventually got to the room it was nowhere near as good as the room we had had on our previous stay, despite booking the same category of room. Two days later we had to move room because of strange noises that were waking us up. We will not be going back there again.

From Cape Town we moved on to Hermanus, a fishing village on the coast, which is popular with whale watchers in the South African winter time. We were not going to see whales, but thought that we would have a look at the place. Hermanus is small with not a lot of accommodation to choose from. Here our choice of hotel was excellent, if expensive. It was the sort of place that we would like to go back to, but I can not see that we will ever go back to Hermanus.

Next stop Franschhoek in the Cape Winelands. This hotel was nothing like I thought that it was going to be based on the impression I had got from its' website. Our room appeared to be a cars' drive from the reception until we found that there was a shorter route on foot. The  room that we were shown to was dark and there was a dripping noise. The air conditioning unit was leaking. The porter thought that this could be fixed by switching off the unit and phoning housekeeping for towels to mop up the water. When a girl from housekeeping arrived with towels she took one look at things and phoned maintenance. While this was going on I was muttering to husband that we were not going to stay in this room and they would have to find us another one. The outside temperature was thirty something Centigrade. We were going to need functioning air conditioning. Maintenance swiftly arrived and said that another room would be found for us, but before that happened they removed the casing from the air conditioning unit and a bucket full of water poured out of it. So we were moved two rooms along to room which was larger and much nicer. All appeared to be well until about 1.30 the next morning when I was woken up by what I though was an animal making a noise. The noise continued for about half an hour and I eventually realised that it was a baby crying - in the adjacent room. Eventually I managed to get back to sleep only to be woken again by this crying baby, which prompted another room move later that day.

The following few nights were to be spent in smaller accommodation. Initially at Swellendam, where we stayed in a boutique hotel and luxury country guest house. Our bathroom was enormous with two showers and twin wash basins along with the usual bathroom equipment. The bedroom which was a good size was dominated by the bed with surplus cushions, a faux fur throw 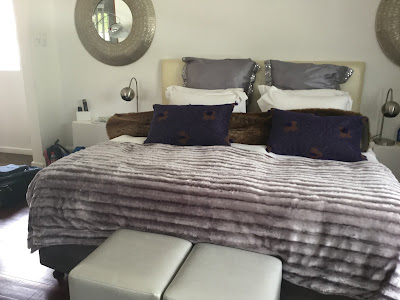 and a blanket all on top of a duvet. Most nights we ended up sleeping under just the duvet cover. The duvet having been removed from it. We had a comfortable night there, once we had sorted out the bed clothes.

Then it was on to a country lodge outside Oudtshoorn, that we had stayed in on our previous visit and been impressed. In the mean time it had changed owners and sadly had gone downhill. The less said about it the better.

Now for a rather grand sounding country house hotel beside Knysna Lagoon, which was pictured in my Wish you were here post. When we arrived here the power was off as a result of the previous night's heavy rain and an almighty thunderstorm was just getting underway. We had a spacious room overlooking the grey lagoon and our only complaint was with the wet weather.

Our final stop along the Garden Route was at Port Elizabeth, where we stayed in an hotel belonging to the same group as owned the hotel in Cape Town. Here we had noisy neighbours in the adjacent room and the hotel seemed to be large, impersonal, rather sad and basically disappointing.

Now for something entirely different. We were off to Zambia. Our hotel was next to the Victoria Falls. It was adequate. The rooms were small and gaudy. When we arrived the swimming pool had no water in it and the area around it looked like a building site. Even husband admitted that we should have stayed at the more expensive hotel next door whose facilities we were allowed to use.

After two nights we were back in South Africa - this time in Johannesburg for one night. The hotel was nicely decorated and furnished. However, we were thrown by the wash basin taps in the bathroom. The cold was labelled hot and the hot labelled cold! And in the bedroom light came round the edges of the black out curtains. It actually was not a problem, but it could have been.

Finally we got to spend six nights in the same hotel. For us this was to be R&R before we flew home. Night one was alright. Night two was not. The air conditioning, which we prefer to be off when we are sleeping, switched itself on at 2.00 am and decided to switch itself off some time around 5.00 am. So I expect you have guessed - another room move was looming. We explained the night's events to the guy on reception, who swiftly offered us another room and an upgrade and a late check out on our day of departure, if we wanted it. He said that the problem was caused by the balcony door not closing properly. I think that they knew that there was a problem with that room and took the chance that we would not notice it.

By the end of the trip we had got used to adapting to whatever perculiarities that night's accommodation offered us. It was good to get back home. There is nothing like your own bed.

Well, that was a variety!
I wishI had had the chance to do the Garden Route...Leo loved it.
He remembers hotels being so good when he was there....but that was years ago - despite having the car break down and having to spend a night in a room behind a beer hall in a township.