Mad as a March hare


Last Monday - March 16 , after the UK Health Secretary's crass announcement on Sunday morning that the over 70s would be expected to self-isolate to protect themselves from Coronavirus, we decided that we had better get ouselves out to do some shopping before even more draconian measures were announced. Our first port of call was the local garden centre. It was quiet -well we don't usually go to the garden centre on a Monday morning. That did not take long. So the next stop was the local Costco for some provisions. As we turned into the access road to Costco the traffic was very heavy. In fact heavier than we had ever seen there. We were soon directed into the car park by marshalls who were directing the traffic. Once in the car park there was really no way out. It was grid locked - not helped by the traffic lights at the end of the access road, which only leads to Costco. We initially thought that we would just go home and come back some other time, but we decided that we might as well go into the store, as strangely parking was not really a problem. However, it was a twenty minute crawl to get into a space. 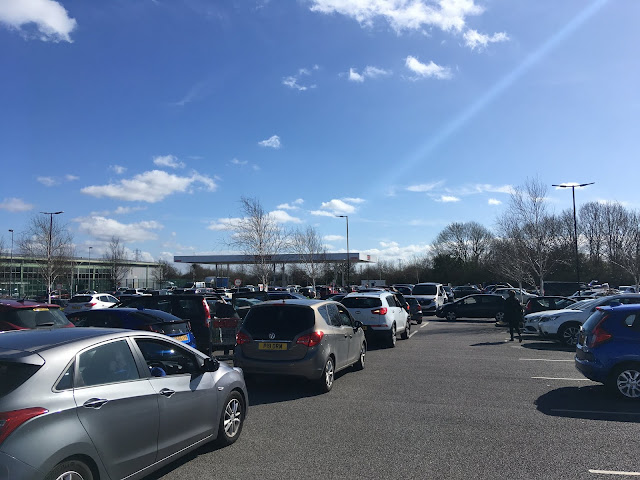 As we entered the store we were told that they were out of toilet rolls and chicken portions, neither of which were on our shopping list. The tills were busy, but the store itself was reasonably quiet. Everybody seemed to be in the car park. Our aim was to stock up with beer and wine, plus a few other bits and pieces, which we did and by the time we reached the tills the queues had gone. However, the car park was just as bad. 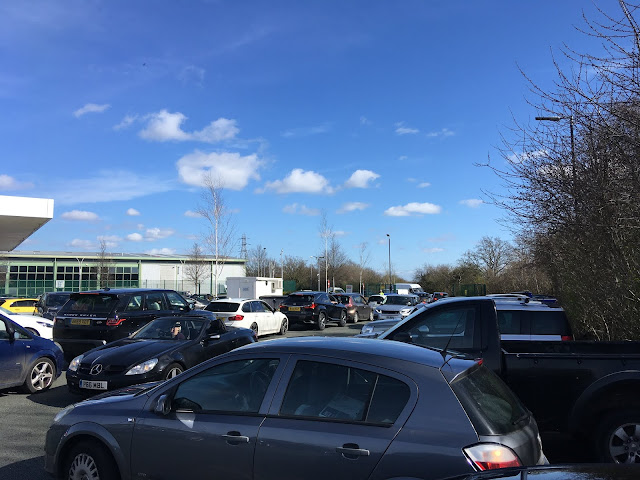 It was another twenty minute crawl to get out of it. By now it was after 12.30 pm and the Jeremy Vine Show was on the car radio. We listened as a succession of indignant seventy somethings complained about the government's instructions to self-isolate. I was aghast at these instructions. My husband was 70 last August. When he hit that milestone, he did not suddenly become a frail, little old man. After weeks of self-isolation I hate to think what state he would be in both mentally and physically. Not to mention my own state of mind! Little did we know that by the end of the day more or less all of us would be in the same boat, as the government introduced restrictions that would affect all of our daily lives.

We realised that we would have to adapt to a different way of life within the restrictions. We watched the Prime Minister's daily briefings and the television news with interest and some trepidation as we heard about selfish individuals panic buying and striping the supermarket shelves bare. So I suppose that husband and I should not have been surprised by what we found, when we went to out local Tesco to do our weekly supermarket shop. The car park was only partly full as usual and there was no queue to get into the store, but once inside it looked like a bomb had hit it with empty aisles and bare shelves. There was a board listing the restricted items. I had a quick look at it and thought we would be alright to buy what we wanted, as there were two of us. Shopping completed we headed to a queueless till, where we were soon informed that we could only have three fruit, three vegetables and one loaf of bread. Of the six vegetables in our trolley which did I want and which one of the two different loaves of bread did I want? I protested that there were two of us, but to the cashier we were one customer and that was that. So to you Tesco, a black mark for allowing customers to panic buy to the point were there was simply almost nothing left for those of us who had stayed at home and obeyed the goverment's instructions. We were horrified. We usually shop once a week and we had only been allowed to buy enough fresh food for two to three days, which would mean shopping two to three times a week instead of once. All when we were supposed to be reducing social contact. This meant playing the supermarkets at their own game. There is a big ASDA about half a mile away, which we had never shopped in, but there is a first time for everything. We took two shopping baskets and split our shop between them, then went through the self service check outs. Success and relief and enough food to last seven days. In the following days I spent a lot of time wondering how to manage this week's shop, if it was going to be as challenging as last weeks had been. On Wednesday I went to the local Sainsburys and was pleasantly surprised to find a quiet and much better stocked store than I had anticipated. Hopefully some of the madness is over. Soon March will be too.

Perhaps I should add that over the last few weeks I had built up our stock of food, especially the freezer, but fresh fruit and vegetables and other perishable items need to be bought regularly.
Posted by cheshire wife at 21:39

I sounds terrible...especially limiting access to fresh fruit and vegetables.
We are confined to barracks given husband's state of health but had done our bulk shopping earlier, seeing which way the wind was blowing.
If he gets it, he dies, so hatches well battened down.