During January while away on our latest escapade we spent rather more time than I would have liked hanging around airports waiting for flights. Our 'home' airport, if that is what I can call it, is Manchester Airport. 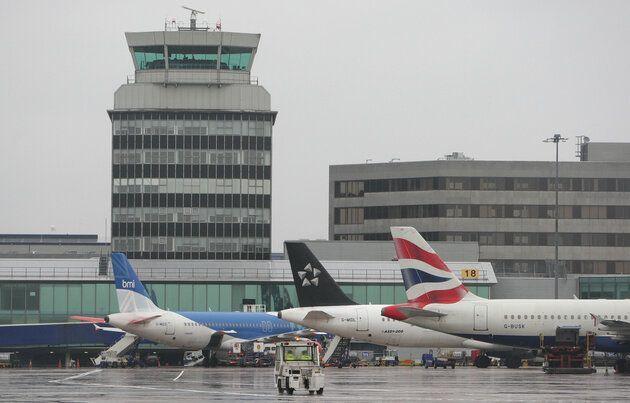 It is the airport that we are most familiar with, but that does not make navigating security there any easier. If we are lucky we get ourselves a priority pass, which makes things easier. However, it always feels like some sort of boot camp as the staff bark orders at the passengers to remove belts, watches, jackets, shoes and this that and the other. It is always a relief to get through without being stopped, as we diligently pack by the rules, but it is amazing the number of passengers who still try to pack items which are not allowed and have not been allowed for several years. Having got over that hurdle we can then make any last minute purchases and raid the ATM, if our destination is Europe. Next we find somewhere to sit so that husband can read the newspaper, while I visit duty free to buy a few items that I regularly stock up on there.

The first flight or our most recent trip was to Dubai, where we arrived around midnight local time, although you would not know that as Dubai Airport functions 24 hours a day. Here we were in transit and had to go through security again, despite having already done so at Manchester Airport. However, surprisingly or maybe not surprisingly Dubai is not as fussy about things as Manchester is. Then we had to take the underground style train to another terminal. Dubai is an enormous airport and we had plenty of time so we occupied ourselves by having a walk around. We had just spent the last eight hours sitting on a plane and we had a further nine hours of flying to do before we reached our destination. Our next flight to Cape Town was to depart in the middle of the night. At the appointed time we made our way to the appropriate gate for boarding only to find that it was locked and it remained locked. We waited and waited. Eventually the gate was opened and we were ushered onto a bus, which seemed to drive us round and round the airport. By now it was 4 am and I was beginning to wonder if we would ever see this plane. Did someone have something else in mind for us?  Thankfully there was a plane waiting for us at the end of the bus ride. Next stop Cape Town and by now we had been travelling for 24 hours and I do not remember much about the airport.

After two weeks of travelling South Africa in a hired car, it was time to hit the airport and fly again. By now we were in Port Elizabeth. From there we were supposed to fly with South African Airways (SAA) to Livingstone in Zambia via Johannesburg. However, SAA changed changed our flight from Livingstone to Victoria Falls Airport (VFA) in Zimbabwe, leaving us no option but to accept the change. But first we had to fly to Johannesburg on a flight timed at 6.45 am, which meant setting the alarm clock for 4.00 am in order to be at the airport in time. In fact we arrived before the check in staff. The plane for the flight was small and even so there were several empty seats, as there were only fifteen passengers and three crew. We arrived at Johannesburg with plenty of time before our next flight. The airport there is huge with two terminals and no obvious demarcation between the two terminals. We went up escalators and down escalators, walked this way, that way and the other way before working out where our gate was. And again we had a bus journey to our plane. Once on aboard the plane I was surprised to read the following statement in the SAA in flight magazine about  Johannesburg Airport - the central terminal building is designed to give passengers a smooth and uninterrupted travel experience. That was not quite our experience. But never mind that, before we could get out of VFA we had to purchase a visa, which had to be paid for in cash - US dollars, GB pounds or South African rand. Despite asking about this, we were unaware that this would be the case. Luckily we had enough cash between, as credit cards were not accepted. Welcome to Zimbabwe! We had arrived.

Two days later we were back there again, for a flight back to Johannesburg. The check in was painful, as their computer system went down just as we were checking in and must have taken about five minutes to come back up again. It seemed like an age. But remember this was Zimbabwe. The next hurdle was buying a drink- coffee actually, which had to be paid for in US dollars. Luckily husband had some. Credit card machines weren't working.

After an overnight stay in Johannesburg it was back to the airport for a flight to the Seychelles. By now we had the hang of this airport as we found our way to check in desk number 103. Our destination airport would be much smaller, but we still had to be back there six days later, two hours before an 8.40 am flight. So another early rise and breakfast of waffles and the plane as we headed back to Dubai. Here we were in transit again, which meant a security check in our arrival terminal and another one in our departure terminal, with a bus ride in between the two. This time here was no hold up at the departure gate and we were soon on our way home to Manchester.
Posted by cheshire wife at 21:58

It sounds like perpetual motion!
Zimbabwean friends - who can no longer live in their own country - tell me that place is going to hell on a very slow handcart so what you say of the 'arrangements' there does not surprise.
Still, at least you enjoyed yourselves between airports!