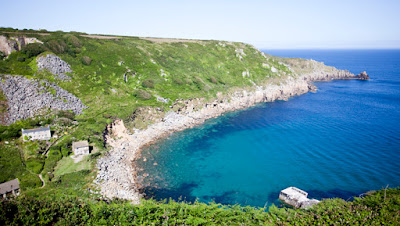 The photograph is of Lamorna  Cove - the setting for the film Summer in February.
Posted by cheshire wife at 21:50

Ah, the conundrum of leaving the comforts of home for a tad of excitement after hours of discomfort. We are there already, meaning that we are traveling less and less. Yes, the call of the wild is still there; but oh, giving up our Sleep Number Bed is a major liability.
Greetings to you from the Oregon Coast, USA.

Check out the airport on Skytrax - some of the comments can be useful in navigating an unfamiliar place.

I've just turned down a cheap flight to London as it involves a five hour flight to Toronto followed by a nine hour one to London. I just cannot do it any more...

Have a wonderful time in New Zealand...

Have a wonderful time in New Zealand. Long haul flights are tedious and tiring. Hope it all goes well and your garden will certainly still be there when you get back!
Maggie x

Rosaria - there is a lot to be said for sleeping in your own bed!

Fly -Dubai airport was OK, we did not have any problems.

Maggie - you are right about the garden. The plants and also the weeds will stil be there when we get back.