Up to the Arctic Circle

The holiday started with a Sunday morning flight from Manchester to Tromso in the Arctic Circle. Arriving mid-afternoon in a cold, grey and snowy Tromso, we settled ourselves into our hotel room then dressed for the cold and went for a stroll. By now it was late afternoon and the temperature was staring to plummet, consequently it was not long before we found a pub for warmth and liquid refreshment. 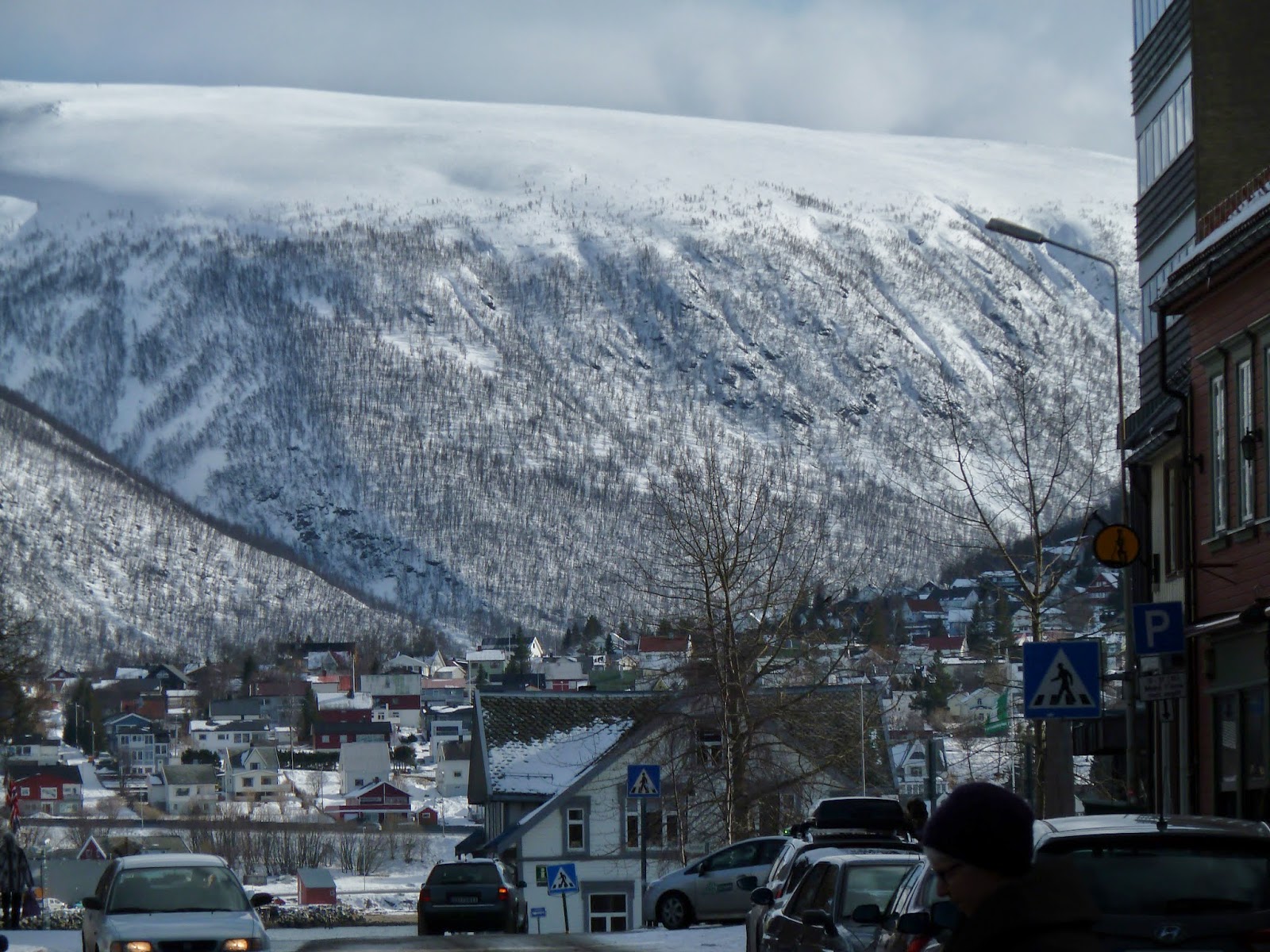 Tromso is the largest city in Northern Norway with a population of 71,000, 11,000 of which are students. Here there are reputedly more bars per person than anywhere else in Norway and the city has the nickname of 'Paris of the North'. It is also known as the 'Gateway to the Arctic' as many of the Arctic expeditions originated here. Today fishing is of prime importance and it's most interesting landmark is the famous architectural masterpiece - the Arctic Cathedral, which was built in 1965, and has northern Europe's largest stained glass window. 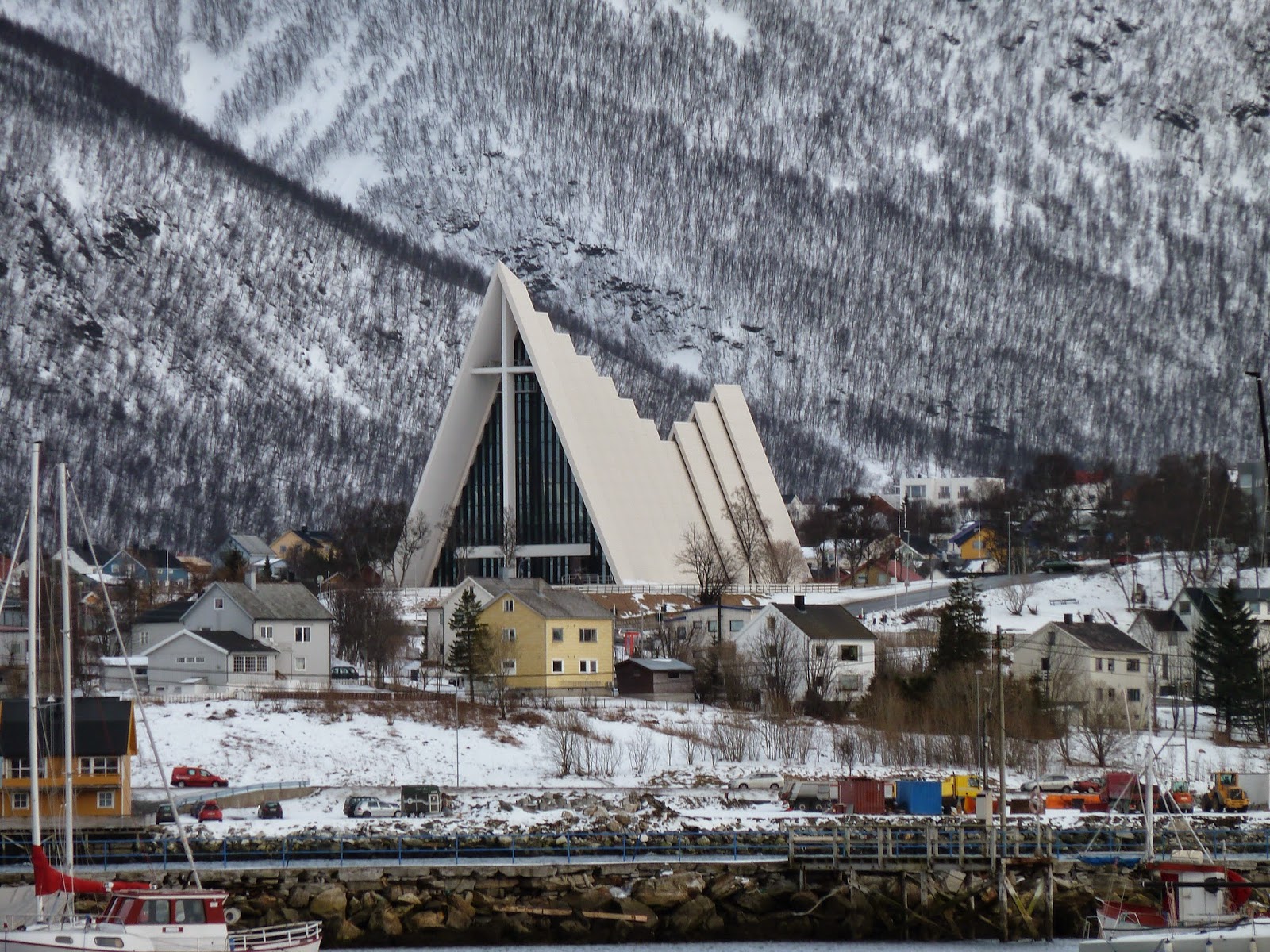 Monday morning dawned bright, sunny and cold and we took ourselves out to do some more exploring before joining a guided walking tour, which took us round some points of historical interest before concluding in Tromso's oldest pub where we sampled beer from the world's northern most brewery, Mack. Finally we had a quick walk in a snowstorm to join the cruise ship which was to be our home for the next three nights.

When the ship left Tromso heading north, in the early evening, all was calm, but as evening turned tonight the weather became wilder as we sailed through a violent storm with winds of gale force 12. We along with many other passengers did not have much sleep that night. By Tuesday morning the storm had blown itself out  and we docked in the small port of Honningsvag as scheduled. However, despite the clear blue skies and sun, our planned excursion to the North Cape was cancelled as the night's storm had left the roads impassable. Instead we went ashore at Honningsvag to have a look around. Here the air was very cold, clear and invigorating which we only very rarely experience in the UK. About a foot of snow had fallen overnight and husband enjoyed himself immensely watching the snowploughs clear the snow into the harbour. There were a few shops open mainly selling Christmas paraphernalia - late for 2013 or early for 2014? 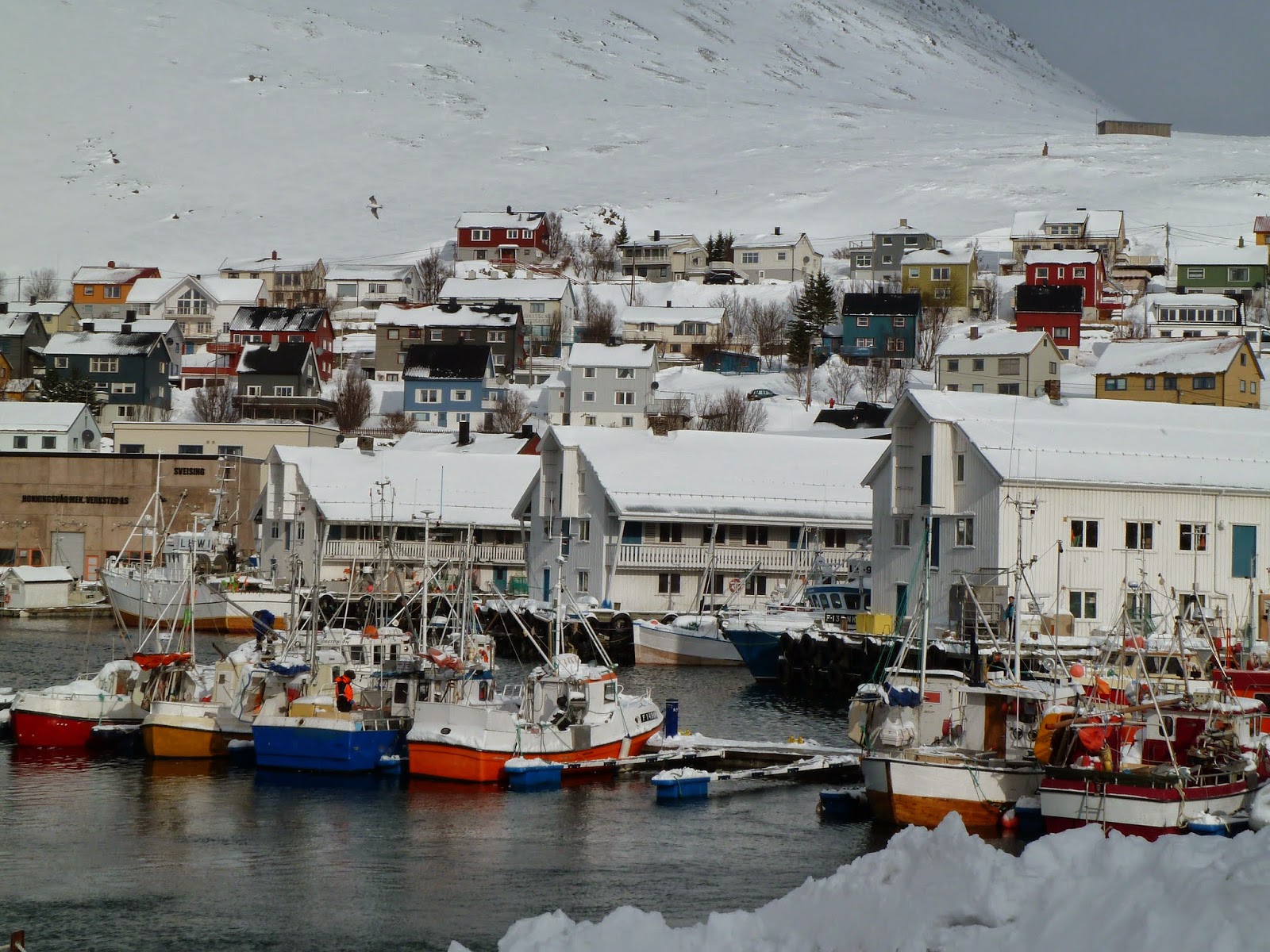 Thankfully Tuesday night was calmer and after a good night's sleep we were up early for our morning's excursion  to the Russian border. The ship docked at Kirkenes (pronounced chickness) the only town in Norway where East meets West. Our coach journey to the border station of Storskog took us through some grim 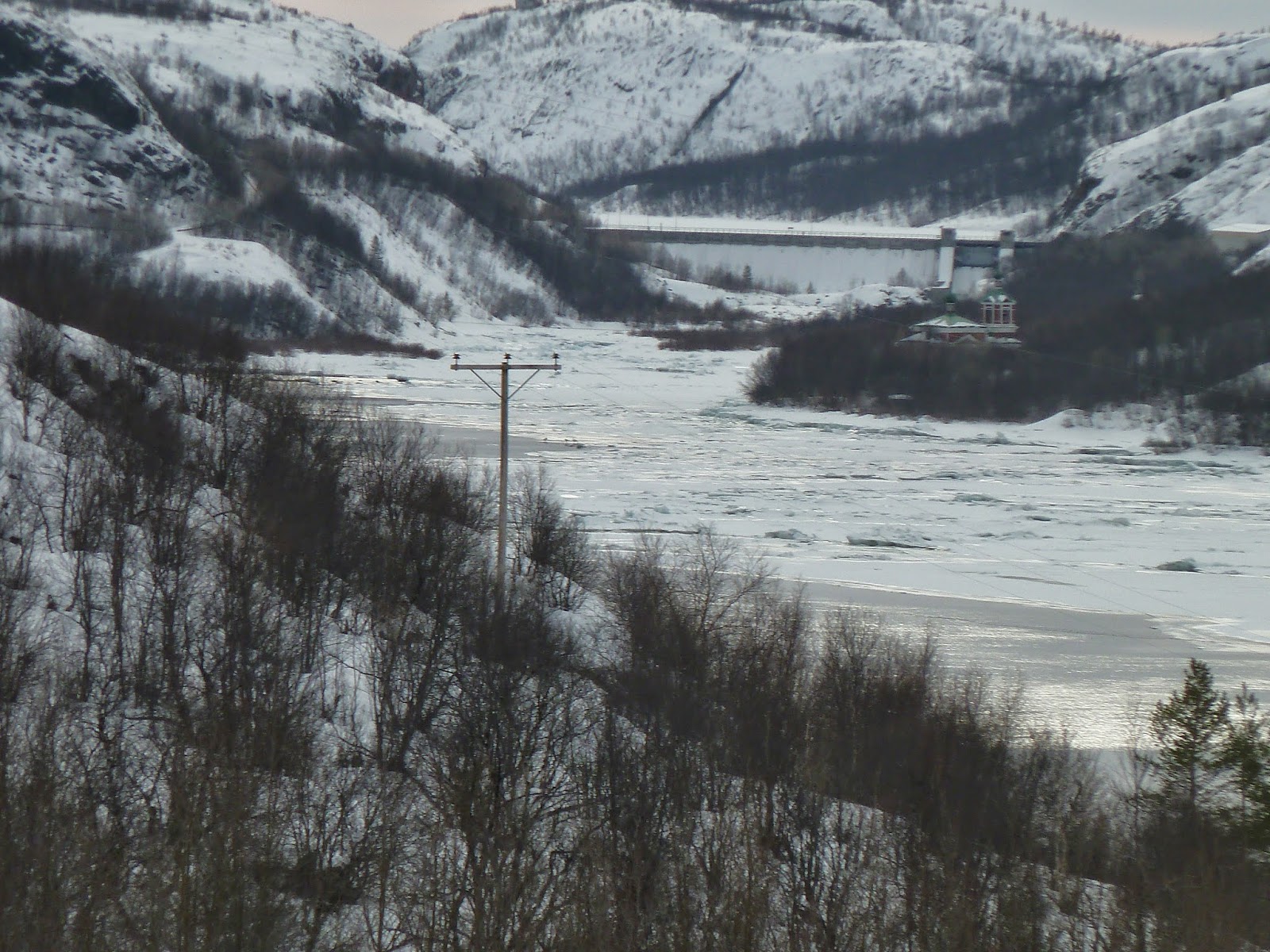 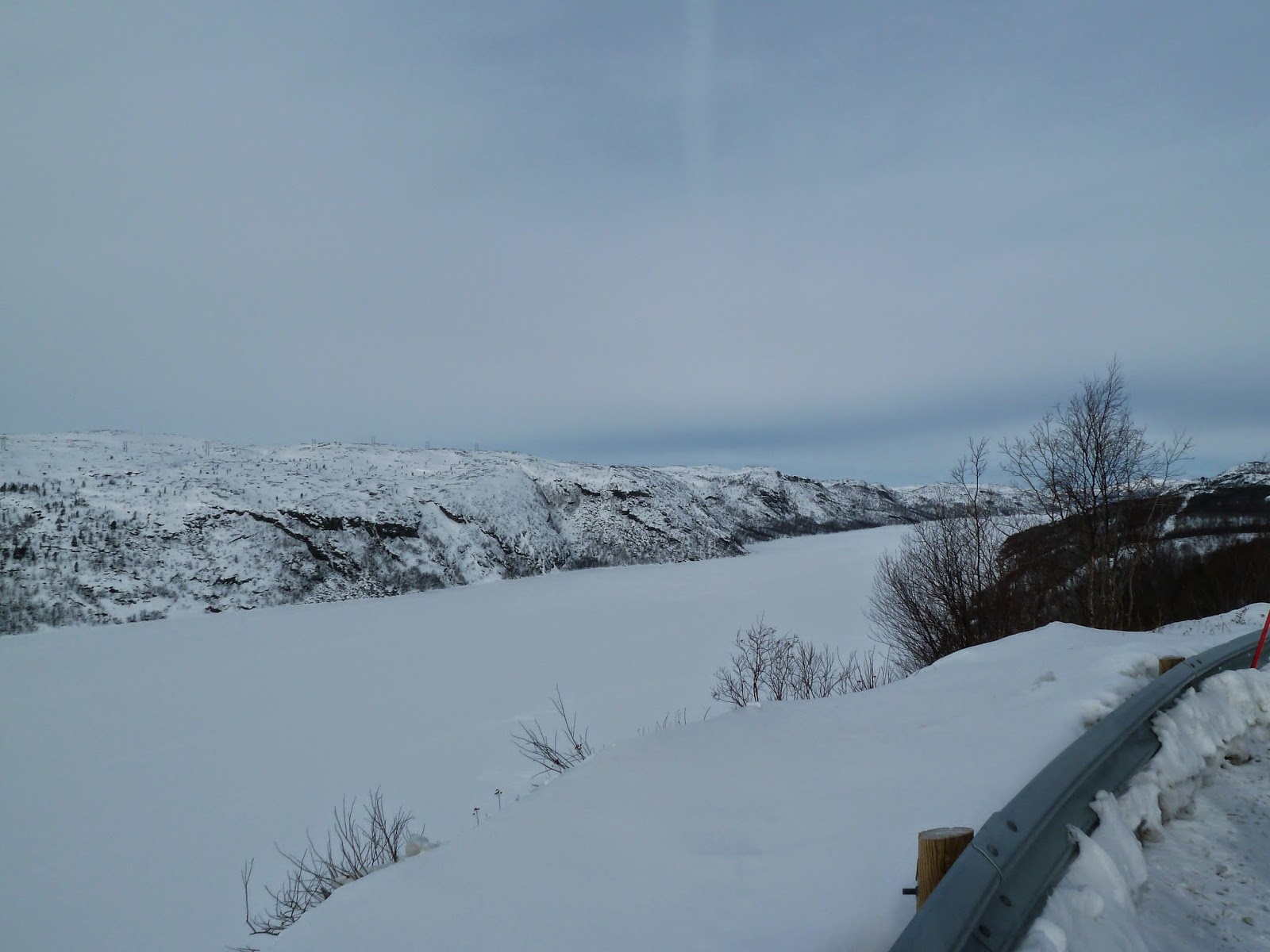 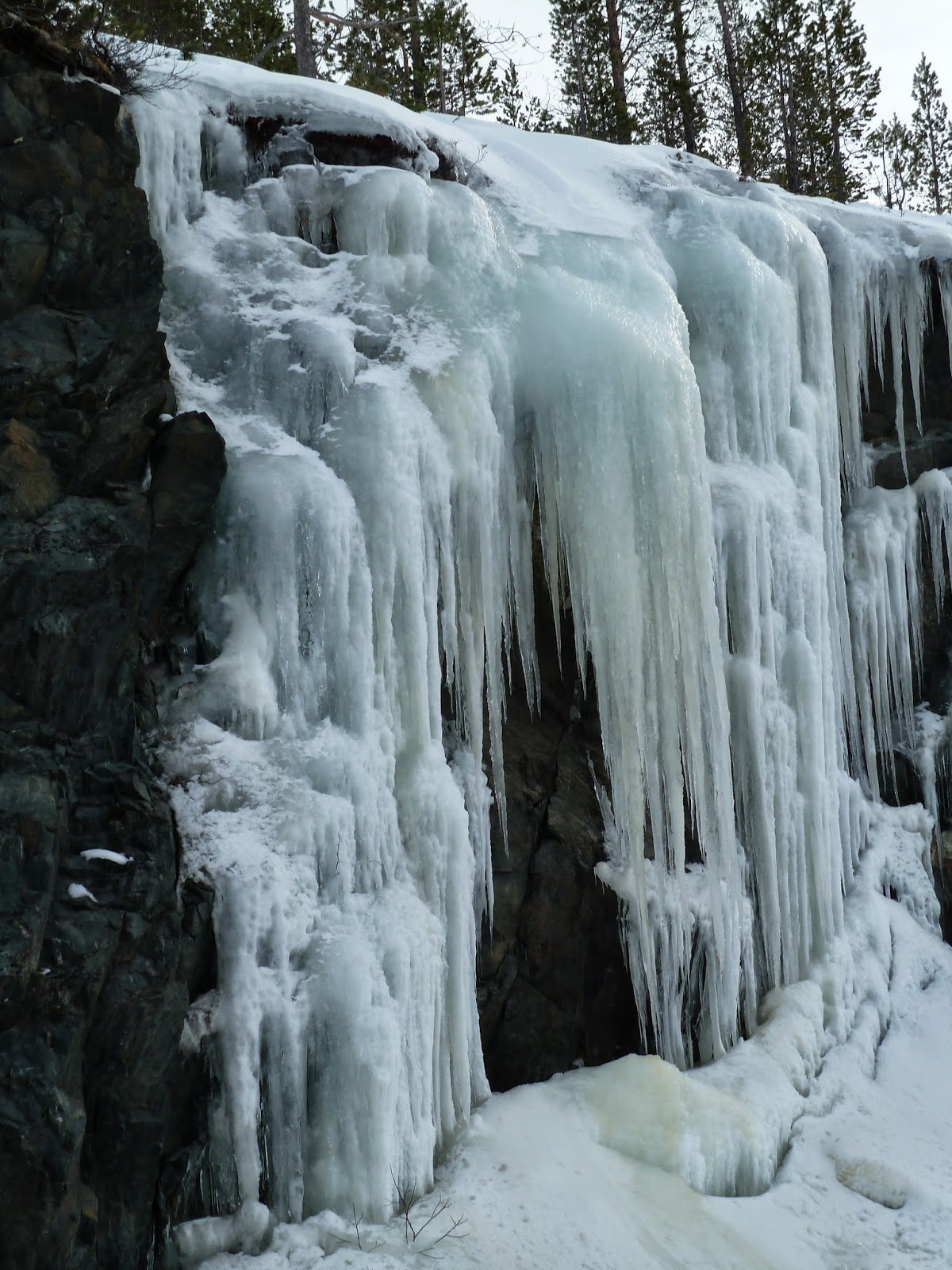 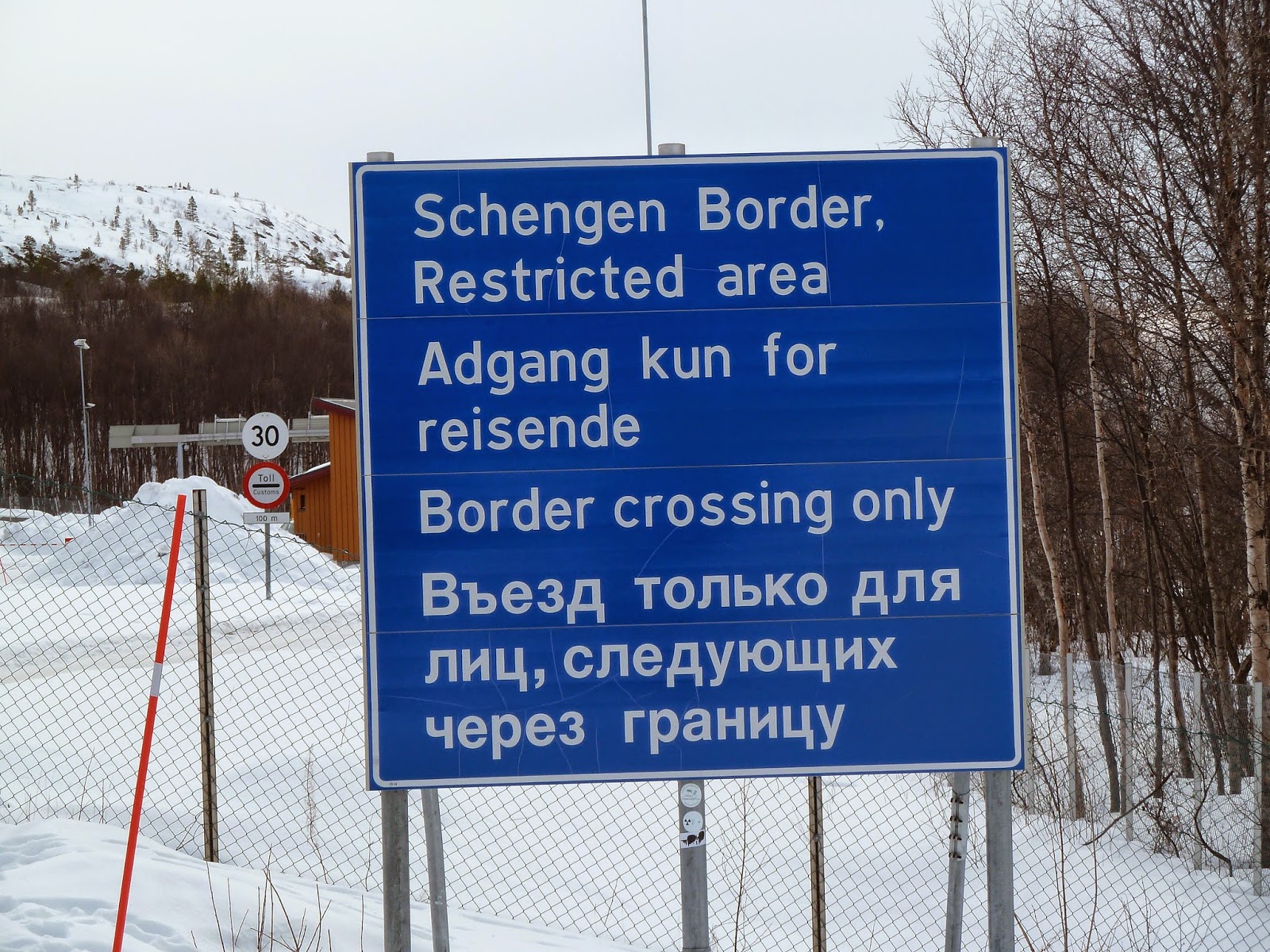 we were allowed to take photographs 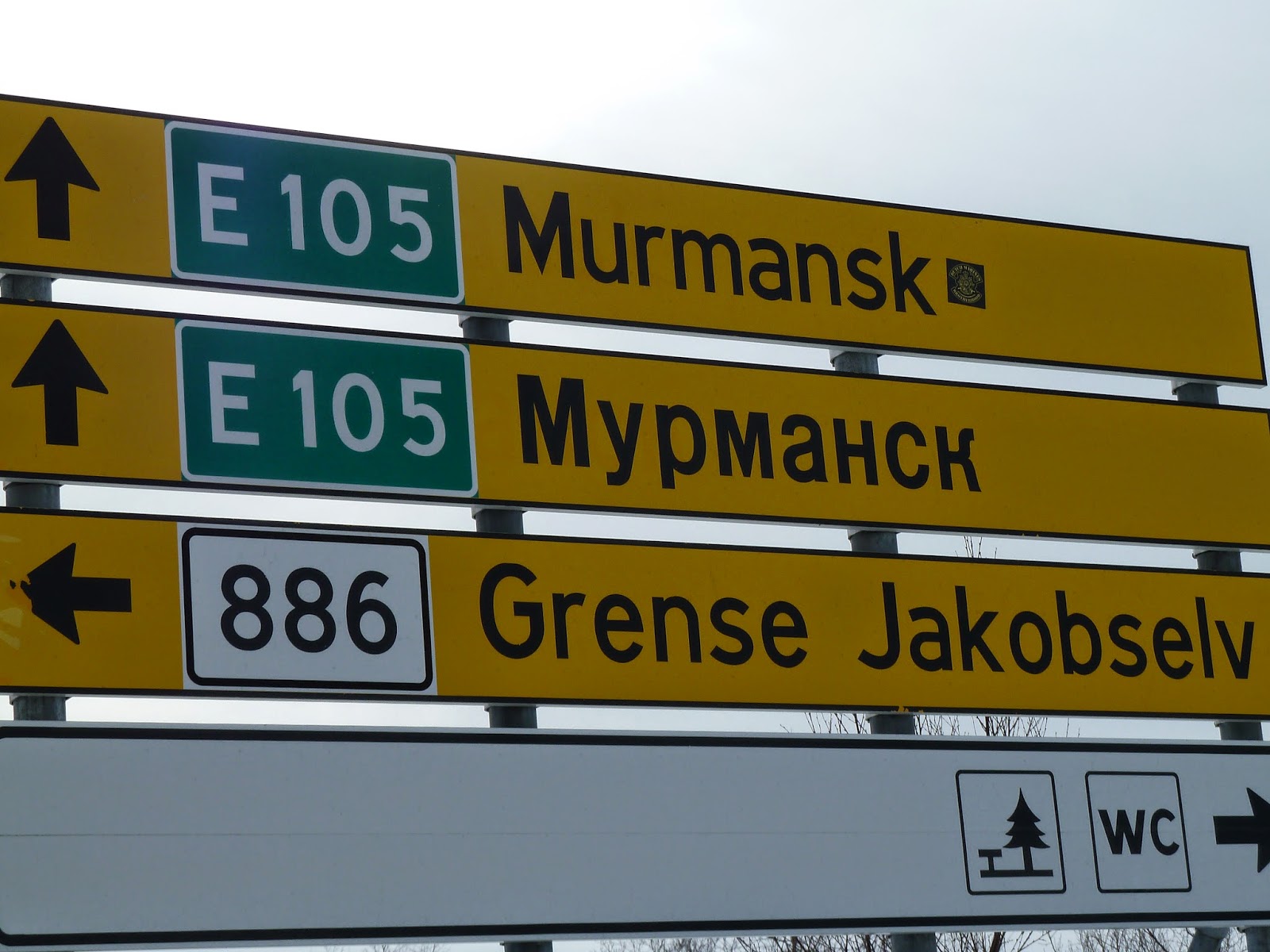 and buy souvenirs, which were mainly Russian priced in Norwegian krone, but we were not allowed over the  border into Russia and nobody made a run for it. 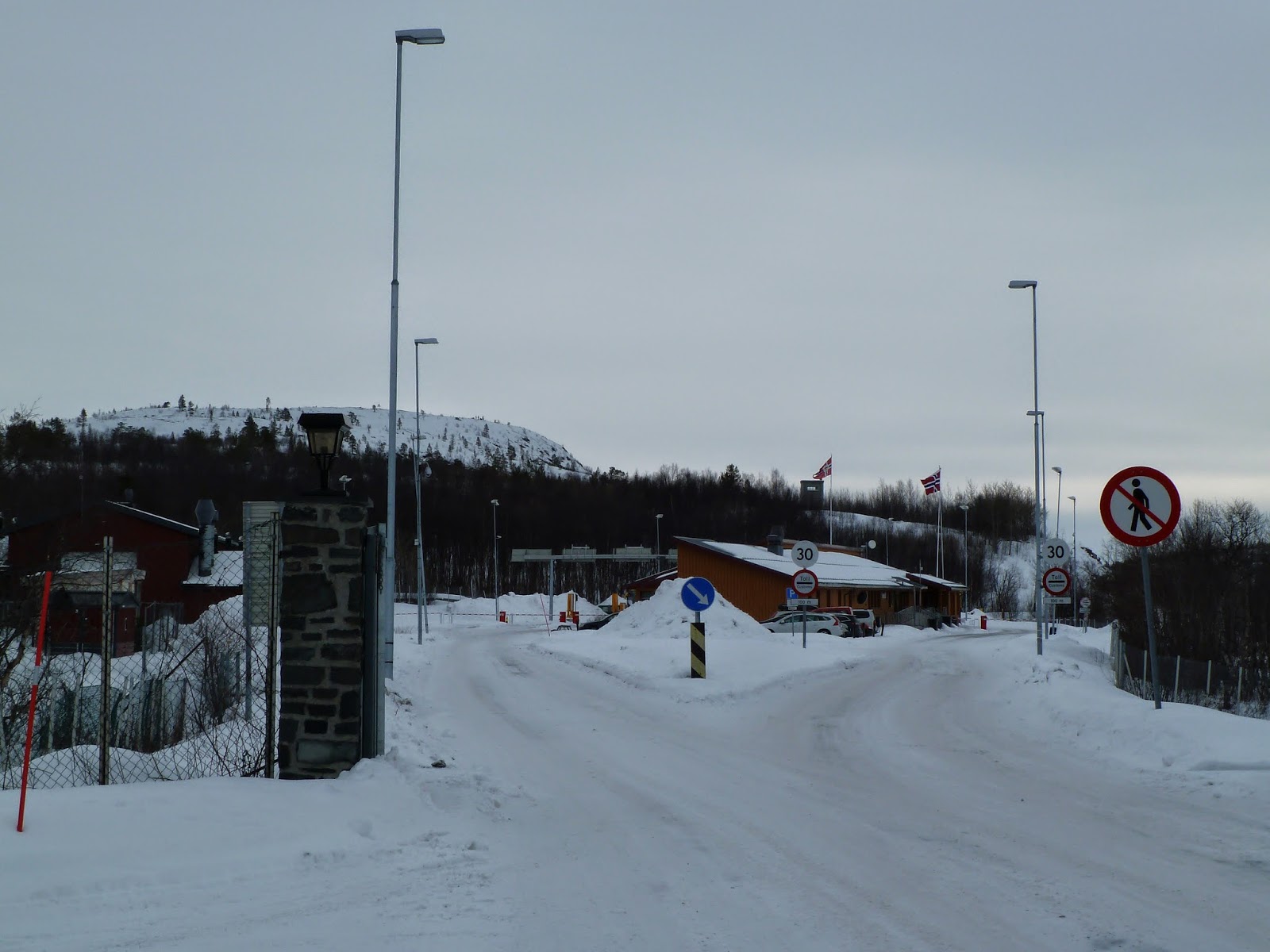 On the return journey to Kirkenes we stopped on Prestfjellet Mountain for this photo opportunity of the port and the waiting cruise ship. 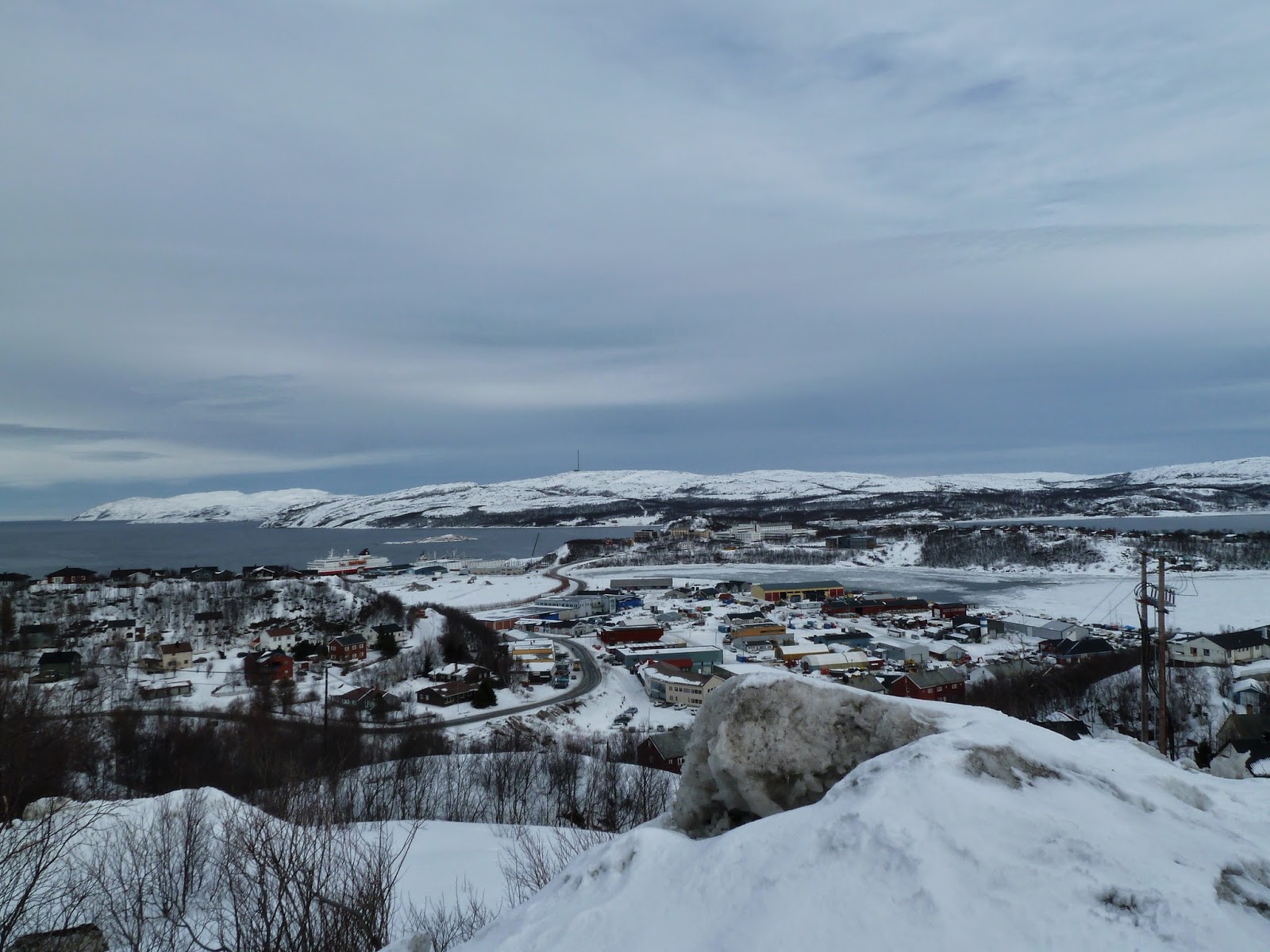 Alternatively some of our fellow travelers had opted to visit the Snow Hotel, but we decided that the Russian border would be more interesting. Others left the ship at Kirkenes to spend a night in the Snow Hotel before returning home. The temperature there is sub-zero and I like my comforts. Even a rocking bed is preferable to a cold one.

By lunchtime we were back on board the ship. At this point it turned around and we began the return journey south to Tromso. Around 4 pm that afternoon the ship docked briefly at Vardo the most easterly town/port in Norway. Here some very brave or foolish soles went ice dipping in the Barents Sea. We went ashore to stretch our legs and even dressed for the weather this was quite the coldest place that we visited.

That evening we had just begun our starter at dinner when an announcement was made over the tanoy system that the Northern Lights had been sighted in the sky. On hearing this 90% of diners put down their soup spoon and rushed to view this phenomenon. We finished out soup before joining our fellow passengers. There were some faint green smudges in the sky- nothing like the photographs that you see promoting the Northern Lights.

Our third and final night on board the cruise ship was again rough although not quite as bad as the first  night. Just winds of gale force 9 this time. Well one night's sleep out of three isn't bad is it? After the first night I had resigned myself to not having much sleep this holiday. What amazed me was that some passengers slept right through these stormy nights oblivious to the mayhem outside.

Our final port of call on Thursday morning was Hammerfest- the world's most northern town. 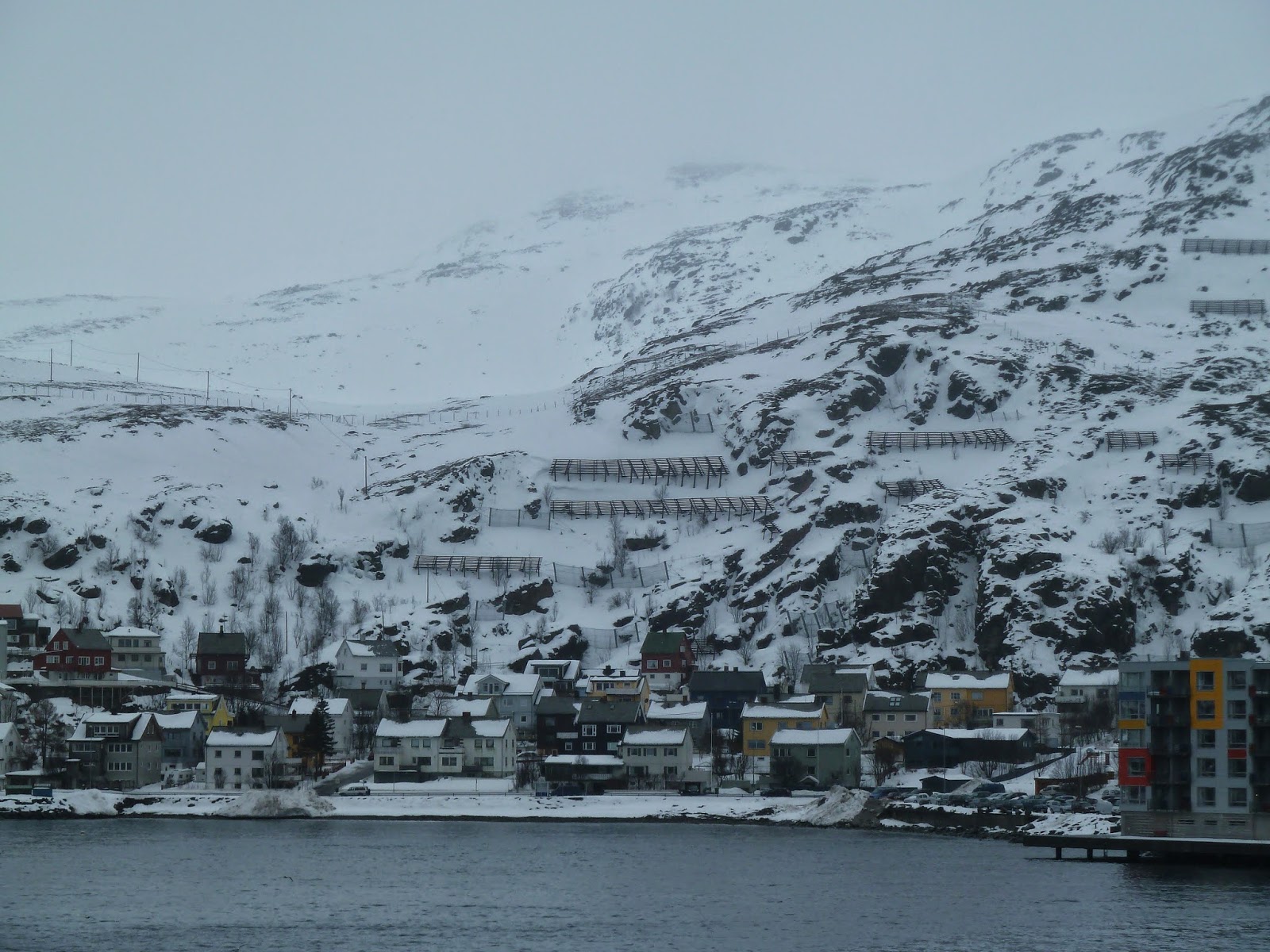 Here it was noticeably warmer, but sleet was falling from the leaden skies. We had a short stroll to this unusual church 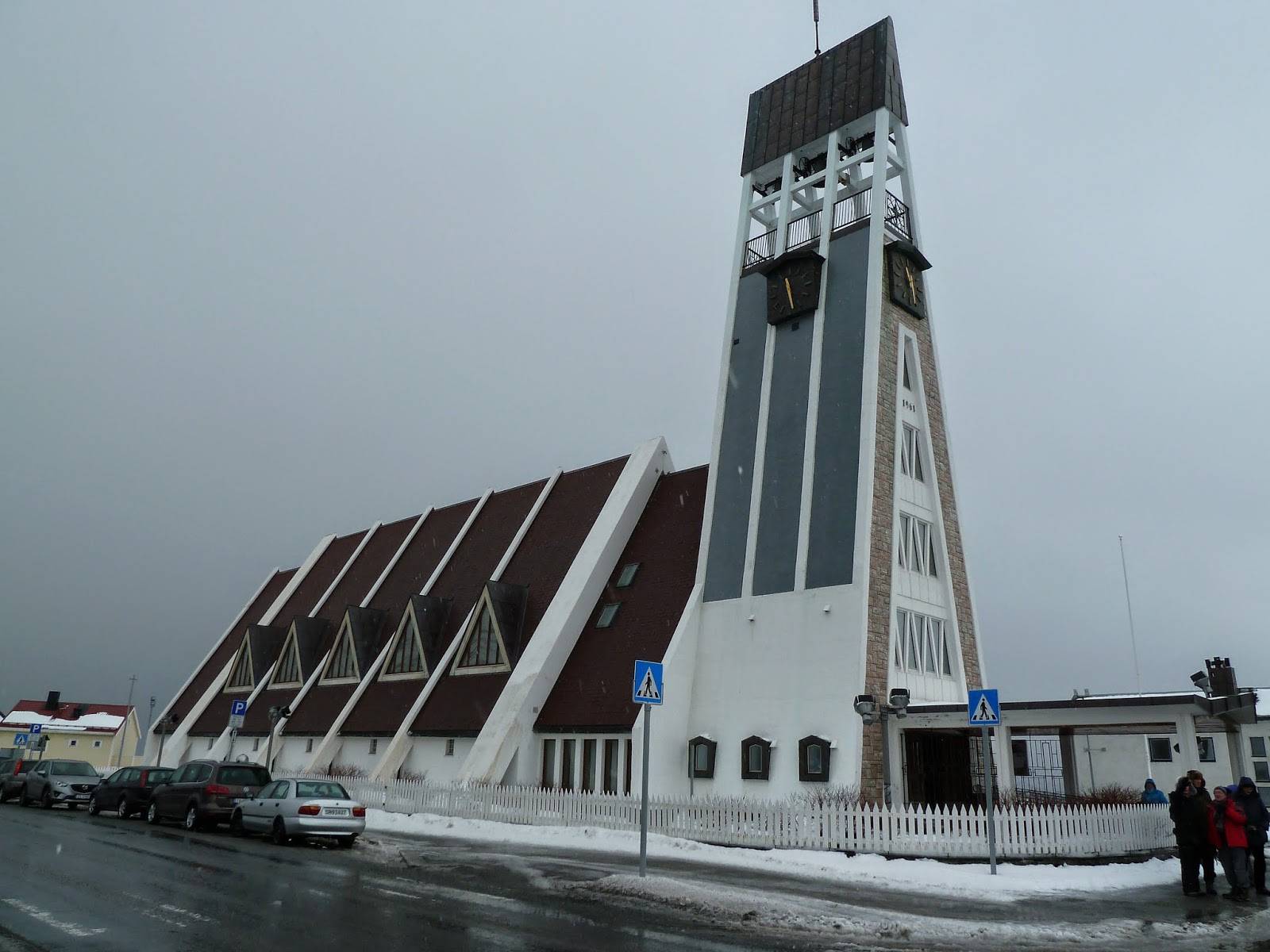 Back on board the cruise ship we spent our final afternoon sailing on calm grey water through the dramatic black and white scenery of the fjords. 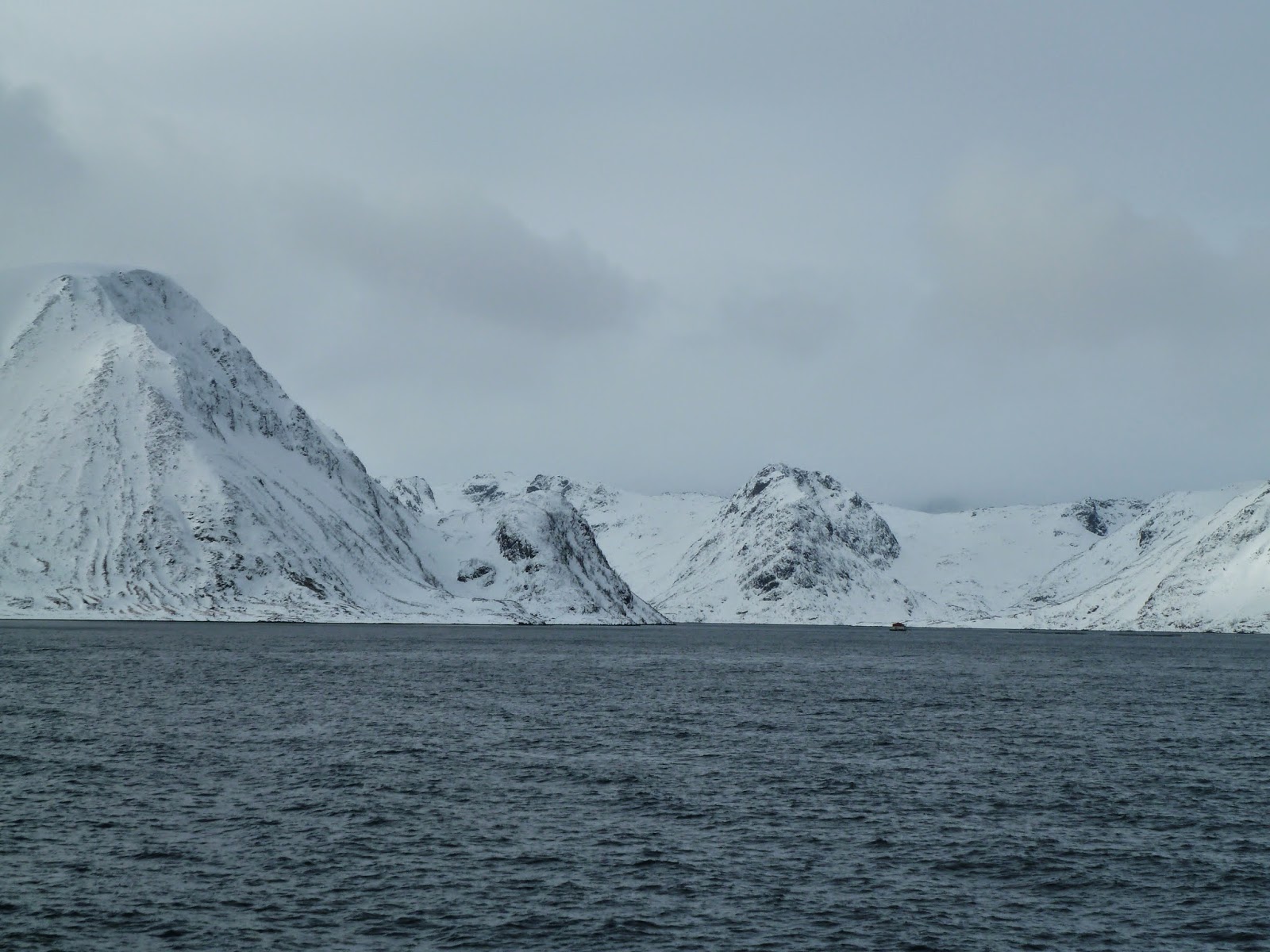 Shortly before midnight the ship docked back in Tromso and our cruise was over. The final night of our holiday was spent back on terra firma in the same hotel that we had spent our first night. 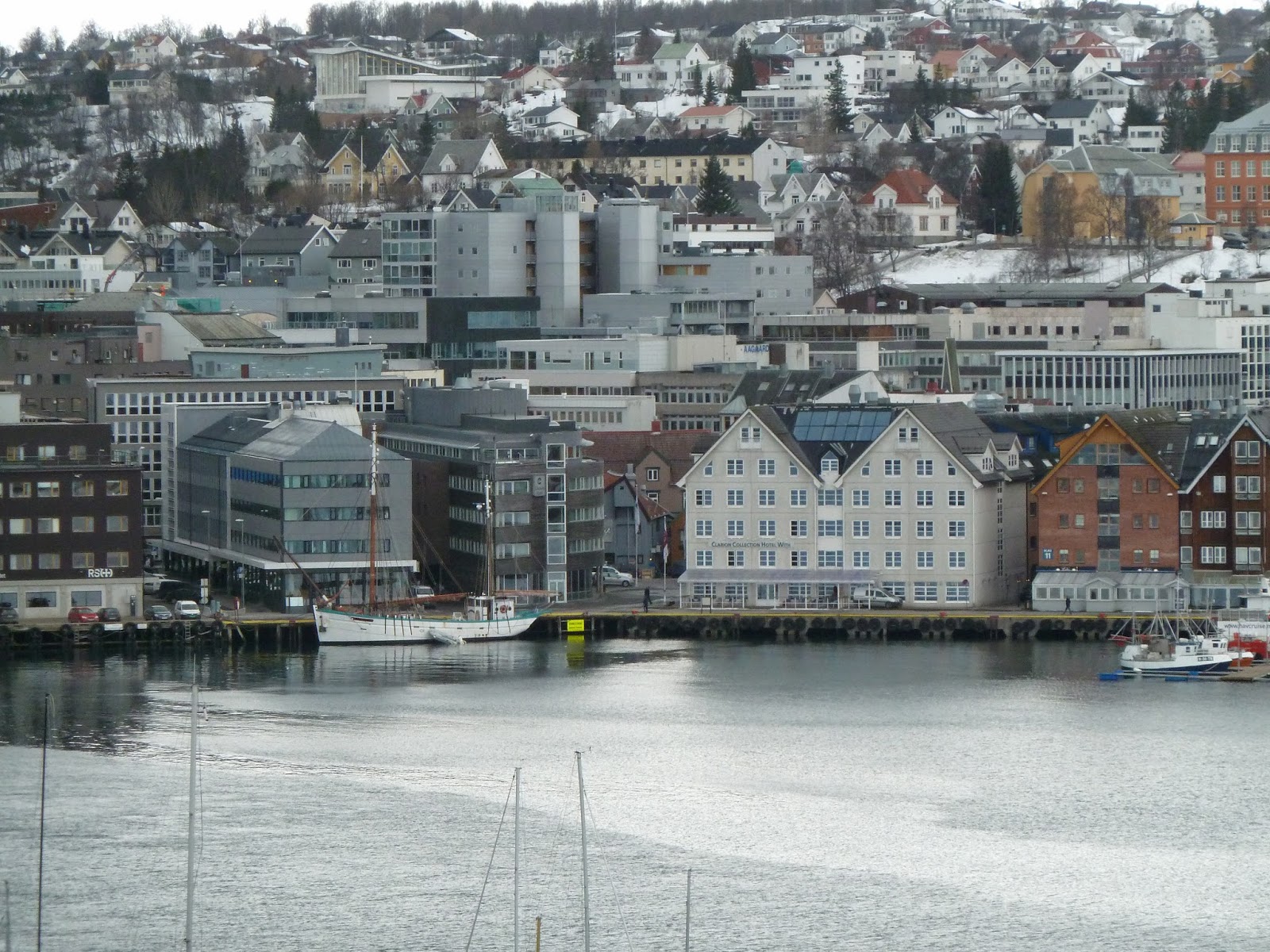 The whole trip was a new experience for us. We did not see the Northern Lights in all their glory which was the initial objective of the holiday and we are not sure that cruising is for us. The cabin was small or perhaps cozy, with foldaway beds that I had expected and an ensuite the size of a broom cupboard.  We did not expect this particular cruise to be luxurious, but had higher expectations of it. If we are to cruise again we would definitely expect something of a higher standard and it would need to be a much larger cruise ship.

What an experience and amazing photos. I would never get my husband to go there, anything under 20C is too cold for him :) Have a wonderful time. Diane

What an interesting post. I don't often get to see such Northerly accounts and photos from someone experiencing them first hand.
Enjoyed going on that trip with you.
Not sure that I could cope with a trip like that these days but would have done it 20 years ago when I was even more robust than I am now!
It must have been a wonderful experience even if the cabin was too cozy and you had to face the storm and the cold!
Maggie x

Wow!"
You certainly had a 'hairy' adventure, I would have been firmly ensconced in a cosy hotel on docking, at the next port of call!
You were very brave to endure all of that, some stunning photo's though.
I don't fancy a cruise in any shape or form, I like small and quiet type holidays avoiding airports and ships.
The most comfortable form of travel we have enjoyed is using the Euro tunnel then tootling around France,
Glad you got back in one piece, I did enjoy reading about your trip,

I enjoyed reading about your trip...I suppose one can't expect the Northern Lights to appear on a schedule, but a bit disappointing when they aren't as cracked up to be when they do.
Those photographs were stunning...the colours of those houses in port made the whiteness all around even more dramatic.

So glad that you are blogging again

An interesting holiday, something different, lovely photos. Such a shame you did not get to see the Northern Lights though.