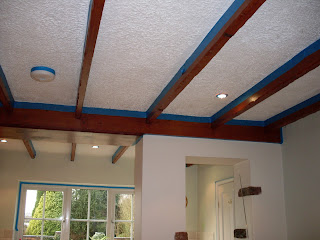 This time all that is needed is a good clean and a fresh coat of paint.  We are keeping the same colour scheme albeit with the walls a slightly different shade of green.
Posted by cheshire wife at 08:00

The hob?
Yes, upgrading an old house takes time and resources. We bought a 1970 cottage, modern for that era, but still needing a whole lot of work, starting with bathrooms and kitchen.

In the end, the mess will be gone, and you'll enjoy the newer digs.

We're in the process of redecorating too. So far we've painted the kitchen and dining room. Hopefully we will get the lounge done next week then the hall, stairs and landing the week afterwards. I don't mind painting at all, in fact I find it quite theraputic but shifting everything before starting to paint is a ball ache!

We live in a late victorian house and there are still many things that need renovating. It is like painting the Forth Bridge!
Sometimes we have to compromise with someone elses idea because theres too much hassle to change things.
Maggie X

We're upgrading the house in San Jose...installing a proper bathroom and removing the smallest shower compartment in the world....installing a proper kitchen...but the poor men are working there three days a week with only a gas ring...so are taking your advice and eating out at lunchtimes.

We are also redecorating our Victorian home and are hitting the same authentic/updating issues.

I like your electric light idea as a way of moving forward.

I'm moving on to another landing today.

The biggie will be the redecoration of my daughter's old room, which is enormous, with aubergine and deep pink walls (it looks better than it soumds!). Son, who is moving in to it, wants white ...

We had beams in the kitchen at the old house and I really miss them. You're right, they do add character. How would I manage without a hob!

Good luck with that. I hate the disruption of decorating any room, so we hardly ever re-decorate though you can only keep washing the walls for so long. Last time I repainted the kitchen ceiling I ended up in bed for several days but then I was already going down with something, like decoration phobia probably. Have a good weekend.

Now how could they forget the hob!!! Restoration is not really a lot of fun but I was lucky working in France. I had plenty of time and only myself to feed while Nigel worked in the UK to pay for everything! We have the original beams but as much as we love them, they do make the room darker. Never the less we would not dream of changing anything original that is in good order.
Keep up the good work you will soon get to enjoy it all. Diane

rosaria - renovation is a rite of passage these days.

Akelamalu - you are right, clearing the room before you start is a fag.

Maggie May - it depends on whether or not you can live with the compromise.

Gaynor - we have enough of candles when we have a power cut.

Valerie - thankfully we were only without the hob for a few days.

Jenny - husband always does the ceilings and is tall enough to be able to be reach the ceiling using a roller, without steps.

Food,Fun & Life - it wasn't only the beams that made the kitchen dark. Everything - cupboards, tiles, floor were dark colours.

Renovations are never fun to live through. They never go quite as planned - particularly time-wise. I hope yours is the exception.

I love our renovated house - and dread the day we have to redecorate. I hope your kitchen is back to normal asap and that you both appreciate the fresh look.
And the hot meals...!

You know you've lived in a place for a long time when you start renovating your own past renovations. After almost 30 years in our Californian Bungalow, the newer extention is the part that needs work rather than the front which is now 80 plus years.
I can hear you all laughing who live in old stone cottages in the UK and France.

our houses name is actually "The Money Pit!!!"

It's never ending those renovations.....good luck,

Hilary - you are right things never go to plan. This kitchen repaint seems to be taking ages.

CW - I, too, hope that our kitchen is back to normal asap.

Leon & Sue - everything was built to last in olden days.

Gill - I know what you mean by the money pit.

Having rented forever I have never had to face the renovation (or even re-decorate) problem. We are, however, now talking about trying to buy somewhere so I will have this to deal with this at some point!

At least its just cosmetic and doenst require walls being knocked down or anything as awful as that!

A kitchen without a hob! I envy you your redecorating, I actually enjoy it. Maybe that's why I'm never really satisfied- job security for myself :)
Good luck with the kitchen freshening!

imbeingheldhostage - I know how trying it is to rent and have to live with decoration that is not your choice.

Artex is a great key for a new skim coat.