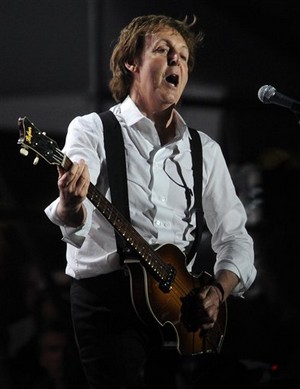 He played songs that had been hits for the Beatles, for Wings and for other artists - all written by him. Some I had not realised that he had written, but now that I know, I can see the McCartney stamp. We had a sing along to Ob la di, Ob la da then Hey Jude with McCartney on  a psychedelically painted piano. While for other numbers he retreated to a grand piano at the back of the stage. One of the highlights was the Bond theme Live and Let Die accompanied by fireworks.
Once we got to the two hour mark I kept thinking 'this must be the last number', then he would launch into another one. He actually played for three hours, including two encores, finishing at 11.20 pm. He seemed as if he could have gone on all night and I am sure that most of the audience would have stayed. There is no question about his versatility or his brilliance as a songwriter and performer. According to a review of this concert he played an amazing 39 songs.
Posted by cheshire wife at 18:55

How exciting !
Sounds like a spectacular performance, three hours, is a long time on stage for a young entertainer, let alone one who is almost seventy years young.
He still looks so handsome.
~Jo

I just stumbled apon your blog and read your post on Paul. How lucky you are. Its so far for many artists to come to Australia. I think it was 1964 the Beatles came here.

Leon and Sue - yes, we were lucky.

Paul was always my favourite Beatle. I remember as a child, well 10 ish when hearing they were on tour, writing to tell them they could stay at our house! Worried for weeks incase they did as we only had 2 bedrooms! lol!

Not bad for someone his age! I do forget that he has never retired, or stopped playing. So, yes, he can entertain us for hours on end.
Lucky you!

How lovely and how amazing that he has the stamina to play or so long. Glad you enjoyed yourselves.

OH I'm so envious! We tried to get tickets but they were all sold out :(

Happy that you had a great time at the concert. I was speaking to someone over Christmas who had the same wonderful experience. She said that Paul was fantastic value for money, and preformed as though he wanted to rather than just a job.

rosaria & Valerie - that new young wife must have something to do with it!

Akelamalu - you will have to be quicker next time.

Gaynor - his performimg seems to be effortless.

I grew up listening to The Beatles and I think I would have loved that concert..it sounds amazing!! Glad you and hubby had a wonderful time :-)

Oh you are so lucky! That man has stamina! I remember the thrill of the Beatles when I was young and their lovely songs that I still like today. However, I never got to see them in the flesh.
Maggie X

Sounds utterly delightful. So glad you had a good time.
Perhaps retirement will agree with you. Seems like a good start.

Carol - I can't remember life before the Beatles.

Maggie - those were the days!

Rob - it certainly raised our spirits.

wow, you are very lucky I would have loved to be there,

Gill - look out for a concert near you.

Just popped over from Leon and Sue. It must have been a great concert, I would loved to have seen it.
Living in Africa most of my life I never got to see live shows very much. We were lucky though, that both Elton John and Queen were sanction busters and I got to see them both. I play Freddie's music all the time since seeing him live :) I still love the Beatles but never had a chance to see any of them. Diane

Food, fun and life - thank you for visiting. I have never seen Elton John or Queen. So I think that it is all swings and roundabouts.