Late last Thursday afternoon I caught a train from Chester to Manchester to meet my husband. On arriving at Chester railway station, late courtesy of the taxi which arrived late to collect me, thinking that I was short of time to purchase my ticket I headed straight for the new fangled automated ticket machine. In my haste to buy a ticket I purchased a return ticket instead of a single.This is the third time that I have used this machine and only once have I managed to purchase the correct ticket. This machine has no instructions and could never be described as user friendly. Realising my mistake, I debated queuing at the ticket office to change the ticket but decided that I did not have the time to join the queue. The risk of missing the train was too great. At Manchester Piccadilly station I was met by my husband. Our intention was to walk towards Manchester Victoria which according to him is a 15 minute walk. Manchester was at its' best. It was raining heavily so I suggested that we wait until it slowed down, but he did not want to do that so we set off. I did manage to get him to shelter when the rain became even heavier, then he had the bright idea of getting a taxi. By now we were already half soaked. We clambered into the taxi and were whisked away to the restaurant that we were aiming for. The evening had not yet started and already three things had gone wrong. But now, that we were in the warm and dry, perhaps things would improve.

We had a very nice Chinese meal swiftly served but no so swiftly that by the time we went out it had stopped raining. Now for the purpose of the trip to Manchester. We headed for the MEN area. We were early. We had a wander around then made our way to our seats. The warm up act came on, on time at 7.30 pm to a half empty arena. Whoever they were, they were so loud that I was vibrating with the music, if you could call it music. After half an hour they left the stage. The lights went up and still the arena was not full. Amazingly for another half an hour the audience casually sauntered in. As I had nothing better to do I quite enjoyed watching them. They came in all shapes and sizes from teenagers, through heavily pregnant to senior citizens, with walking sticks, white sticks and hearing aids - I am not kidding. By 8.30 pm the arena was as full as it was going to get. The lights went out and Eric Clapton and his band took to the stage. For a 64 year old, who lived lif 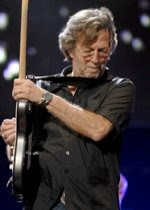 e in the fast last during his twenties and thirties, he looked very good, with a full head of glossy brown hair, his only concession to ageing appeared to be his trade mark metal rim spectacles. Wearing a casual black, short sleeved shirt and denims he spent two hours on stage performing from his repertoire of hits. My husband is the fan, so I have to say that I did not recognise some of the numbers that he played. However, I did recognise I Shot The Sheriff and Layla which was performed as an easy listening number rather than the raw version which was a hit all those years ago. Then he went on to murder Somewhere Over The Rainbow. Judy Garland would have turned in her grave if she had heard it. And of course, he had to play Wonderful Tonight, the song that he wrote for the model, Patti Boyd who he later married. After an encore, they were gone. Clapton was good and he is still master of the guitar but his voice is not what it was.
Posted by cheshire wife at 11:11

I really like Clapton's early stuff....he's an amazing guitarist...must have been great to see him live!!

Glad that eventually you had a really good time after all the hiccups!

Did you know it's actually Eric Clapton playing on the Beatle's 'While my guitar gently weeps' and not George Harrison? (Bet your husband did!)

What a wonderful evening that must have been!!!! Thanks for sharing!!!! From your wonderful description, I can just imagine it all! Terrific! ~Janine XO

Now there's a concert I'd have loved to be at! Glad that you had such fun and then shared it with us!
Sandi

I saw him years ago at a Prince's Trust line up (it was one mega star after another) and he was good then, but it was his heyday.

I loved the build up to the concert

Glad you are well

Now I'm jealous ;)
I would think his concerts are amongst the best !
Sounds like you had a wonderful time...it helps to get out now and again doesn't it ?
Thanks for sharing...

I love Somewhere Over the Rainbow! Hi, I'm Debbie. I came over from sweet Janine's blog. Great post. Have a wonderful weekend!

I think that whether you are a fan or not it's an experience to see the "greats". Glad you enjoyed your evening in spite of the weather. A x

I had to laugh at your description of the evening! It rained here, too (20 miles south of Manchester) and I got drenched!

I'm not an Eric Clapton fan, but I hope you enjoyed most of it! And did you use the return half of the ticket??

Well at least the whole evening wasn't a complete wash out! :)

We went to the MEN recently to see Simply Red and the place only filled up about 5 minutes before SR were due to come on stage. There was a great support act on though so I'm glad we got there early. I love the easy listening version of Layla, mind you I like Eric Clapton full stop. :)

PS meant to ask where did you eat? Last time we went to Manchester we ate at the Little Yang Sing on George Street and very nice it was too. :)

Eric Clapton must have been fabulous even if you are not a fan. I didn't know he was playing MEN.

PS Just for future reference, there is a free bus between Picadilly and Victoria, or you could have caught the tram. And it doesn't always rain in Manchester - only place that test cricket has been called off because of the sun!

The Dotterel - No husband didn't know, but does now. You are full of useful bits of information!

SJA - I agree it is good to see the 'greats' even if you are not a big fan.

Gilly - No did not use the return ticket. It only cost £1 more than a single.

Akelamalu - Why weren't you there? Thanks for your recommendation. We ate at The Rice Bowl.

WM - The trams aren't running at the moment but even if they were husband would have wanted to walk.

It sounds as if you had a really enjoyable evening. I notice you have a photo of Mow Cop on your sidebar, which brought back memories as my mother used to live very near there and it was a place she was very fond of.

I had a bad experience with Eric Clapton about 15 years ago. Well not Mr.C. himself but rather one of his songs. We had an office party with karioki (sp?) and I rather rashly said "just pick me a song". They chose "I Shot The Sheriff" and I was 10x worse than awful. Somebody videoed it but I only saw it for the first time at my retirement party in 2007.
I break out in a cold sweat ever time I hear the words Eric Clapton!

Just checking in on you..hope all is well
Sandi

Troy - we learn from our mistakes, I hope.

Sandi - thank you for your visit.