Last week's break had been pencilled in for some time. My husband had taken the time off work and we had planned to go to the Lake District. We had not got round to booking any accommodation and when it became apparent, earlier this year, that we needed to be 'on call' to get my mother into a home, we decided that we would have to do a last minute booking. Last year we made the same plans and were not able to go to the Lake District because my husband was not well. We stayed at home, gardened, went to Ness Botanic Gardens and visited Another Place. Hopefully next time, that we plan to go to the Lake District, will be third time lucky! We needed to go to my mother's bungalow in Sussex, to collect some more clothes and bits and pieces, which meant that the most logical destination would be in the south of England. We had decided on the New Forest and Tunbridge Wells. So we found ourselves, at 11 pm on the last Bank Holiday Monday, trying to book accommodation via the Internet. After a compromise we stuck a pin in the computer screen and booked ourselves two nights in Tunbridge Wells, in Kent and two nights in Lyndhurst, in the New Forest. 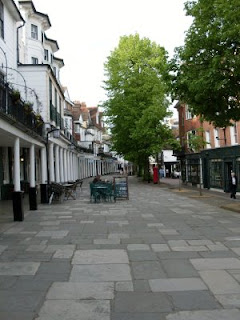 After a reasonable journey down to Tunbridge Wells on Tuesday, we checked into the hotel where we were given room number seven, which was called Victoria. It was almost a suite, with a separate sitting room, a good sized bathroom and a large bedroom with an enormous bed. Albert was the next room. After unpacking and a cup of tea we went for a walk around Tunbridge Wells eventually finding The Pantiles - photographed right. This hotel was a good find and we would go back again. The only criticism that I had, was on our first morning we were woken, half an hour before we had set our alarm clock, by an alarm call that we had not booked. After that I unplugged the bedroom phone each night.

On Wednesday morning we drove into Sussex to my mother's bungalow, where we spent a couple of hours sorting out her clothes and shoes. I didn't know that she possessed so many. We left with a suitcase full of clothes, a holdall full of shoes and several other bags of miscellaneous belongings and headed back towards Kent. We had lunch at the Swan at Lamberhurst, where my husband had a Stilton ploughman's and I had a ham sandwich, after which we both felt so full that we could never imagine wanting to eat again. 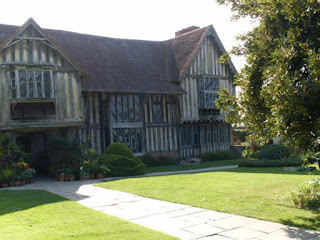 Then on a perfect sunny May afternoon we set off for Great Dixter - the home and garden of the gardening writer Christopher Lloyd. Over the past few years, as I have worked on our garden at the cottage, I have become a great fan of Christopher Lloyd. This was somewhere that I had never expected to see, as it is about 300 miles from our Cheshire home, so this was to be a real treat and it did not disappoint. From the village of Northiam we followed the signs that took us about a mile down a single track road
until we came upon the 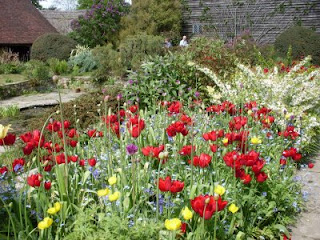 house that we have seen
so many times on television gardening programmes. Great Dixter is a 15th century timber framed hall house. We were allowed into three rooms. The construction and the beams are amazing. My husband was particularly impressed. Considering the time of year I had not expected too much of the garden, but it was an absolute riot of colour and the planting is exquisite. I took so many photographs that it has been very difficult to select just one for this post. It was the nearest thing to gardening heaven. After this anything else was going to be a let down.

On Thursday morning we set off for the New Forest. We were there by lunchtime and spent a cool damp afternoon wandering around Lyndhurst. It is an attractive little town full of estate agents, tea shops, charity shops, antique shops and gift shops not seen in the Chester area unless they are there and I simply do not see them, because I live here. 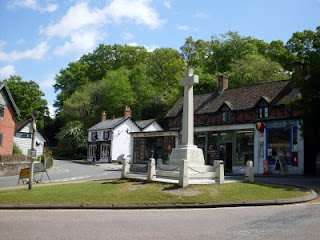 The following day the weather was no better so we opted for a drive around the New Forest to see the places of interest. The New Forest is England's newest National Park. It is busy market towns and picturesque villages of thatched cottages and old world charm with stunning scenery, but we were not seeing it at it's best. Nevertheless where ever we went we saw lilac, hawthorn, laburnum, horse chestnut, clematis, bluebells and rhododendrons in flower. Then there are the ponies and the cattle grazing freely. Pictured right is the pretty village of Burley, where we stopped for lunch. 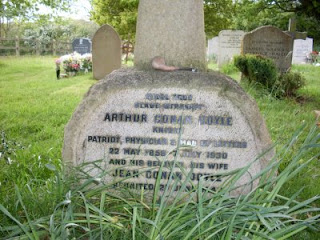 There is history to the New Forest, too. In the churchyard in Lyndhurst is the grave of Alice Hargreaves (formerly Liddell) who was the inspiration for Lewis Carroll's Alice in Wonderland. The village of Sway was the setting for Captain Marryat's Children of the New Forest and in the churchyard of the tiny village of Minstead is the tomb of Sir Arthur Conan Doyle, the creator of the famous fictional detective Sherlock Holmes.

The hotel in Lyndhurst was not worth a mention. Needless to say we will not be going back there. We enjoyed our break. We had too much to eat and too much to drink and now it is good to be back to normality, whatever that is.
Posted by cheshire wife at 20:40

What a lovely trip you had!!! I do love motoring through the countryside! And such fascinating places...Lloyd's home...terrific! Beautiful photos! Thanks for sharing!!! Hope your Mum is doing well! ~Janine XO

That was a lovely break that you had.
Was interested in seeing Arthur Conan Doyle's head stone and the Christopher Lloyd territory.

Normality? If you ever find out, do tell me!

Thanks for sharing your journey and lovely photos. A bit of a break and some "business." too.

That sounds like a fantastic trip!! The garden's look absolutely stunning!! I think people forget that Britain has so much to offer and so much to see.

I hope the holiday was the tonic you needed

Last minute spontaneity is sometimes the best way to go. I also like Tunbridge Wells and Lyndhurst, although I've always thought the New Forest a bit over-rated - it is so scrubby and treeless in places.

Christopher Lloyd's place looks great and I for one would like to see more of the photos that you took. Isn't it a bit sickening though when you go to a masterpiece of a garden - it always makes me a bit discontented with my little lot.

Hope your mum is settling in better - at least she'll have more of her things around her soon.

p.s. how can you get so full up from a ham sandwich? You can tell I'm a greedy person :)

It is so beautiful in that neck of the woods!

I enjoy wasndering around the countryside with people - one either finds new places (Tunbridge Wells) or revisits known ones (like Lyndhurst).
Hope your third time lucky works out and that when you do get to the Lakes the weather is good.

Particularly liked the old house...perhaps I'll look at it again and feel a story coming on!

I love the New Forest - we used to live not far from there, so it beame very familiar. But frequently damp!

But I've never been to Great Dixter, and would love to go. It must have been gorgeous there.

Next time lucky to the Lake District!! (I can recommend Grange-over-Sands. On the edge, but so lovely looking across Morecombe Bay, and all the Lakes within a car's ride.)

Your trip sounds just lovely. I've never been to the places you mention but I would like to now, after reading your descriptions. Great photos too! :)

Jinksy - what is normal for one is abnormal for another.

FF - sandwich is probably the wrong way to describe it as it was more like a roll and large.

How interesting. I'd love to go to Great Dixter.

What a great trip and to think it wouldn't have happened if you had planned it all out in advance. I've been toying with the idea of going to New Forest for this may holiday (half term), so I appreciate the info :-)

Sounds like you had a relaxing trip CW. I have never visited Tunbridge Wells but know the New Forest reasonably well, though have not been for a while now. A lovely time of year to see it too. A x

Oh it's nice to have a break - and it sounds like you deserved it. The home and gardens of Christopher Lloyd are just beautiful. Thanks for sharing.

You are a star!!! Visit my blog to accept your award! ~Janine XO

Sounds like you had a wonderful trip. Have to admit it's not a part of the country I know very well, but sounds fantastic. We recently stayed in a Cottage For Rent in The Lake District which we booked as a last minute weekend away, and would thoroughly recommend it to anyone. Wonderful peaceful location just outside the town of Kirkby Lonsdale with plenty to see and do. If you get round to going to the Lakes next year I would definitely recommend staying here.