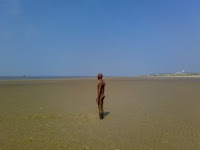 Crosby beach is about a ten minute walk from the nearest car park so you can not actually see Another Place until you get to the beach. There are 100 iron men, cast in the mould of Antony Gormley spread along three kilometres of the beach. I was a bit disappointed as the men are not particularly big and I thought that they were too far apart to have the impact that I felt would have done the idea justice. Still it is very novel and we had some fresh air or even, sea air and exercise.
Posted by cheshire wife at 16:16

It'd be great to see a picture of the iron men.

Hope your husband is feeling better.

Thank you for your suggestion. There is now a photo of an iron man on the Another Place post. Apologies for the delay. When we got to the beach my husband found that the battery in our digital camera was flat so took some photos with his mobile phone. In the mean time he has been away hence the delay.

The cough is improving thank you