What do those stars mean? 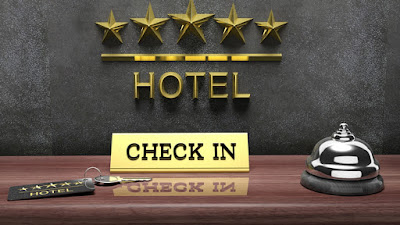 When I was a teenager, I remember my father commenting that he would only go away from home if he was going to stay somewhere that was as comfortable as home. The comment clearly made a lasting impression on me, but as a teenager, as much as I appreciated home, home comforts were not the be-all and end-all in my life. Over the years I have come to realise the wisdom of  my father's comment and now, at an age when I am older than my father was when he made the comment, I am fully in agreement with him.

Over the course of our recent trip to South Africa we experienced a variety of different types and standards of accommodation. Our aim when booking these long haul trips is for the type and standard of accommodation that we usually book when we visit anywhere nearer to home, such as within the UK or Europe. We managed to achieve this for some of the stops, on our recent trip, but not all. Interpreting accommodation websites is something of a minefield and for far flung destinations we are still learning how to get it right. Just what do those star ratings means? Who awards them? Can the hotel/B&B or whatever it likes to call itself put whatever it likes on its' website? which today they all  have.

So what exactly are we looking for when we book acommodation?  A convenient location  within walking distance of shops and restaurants as we usually eat out in the evening. The bedroom must be in a quiet part of the accommodation and be a good size as we shall be living out of a suitcase for the duration of these trips, which in the case of South Africa was three and a half weeks. A modern bathroom with complimentary toiletries. Husband can not live without WiFi. A comfortable bed with soft pillows. Most rooms have a TV, but we rarely watch it, although we may watch more TV abroad if we not able to take our tablet computers with us. Air conditioning. Curtains/blinds that cover the whole window. A good view from the window is not essential, but may be a bonus.

Things started well enough with a very good hotel in Cape Town. Good location, good sized bedroom with everything that you expect plus a good view. OK it was expensive, but that is Cape Town. It ticked all of our boxes and was perfection. We would stay there again if we return to Cape Town. From there things went downhill. At our next stop the travel agent had not booked the category of room that we had requested and the hotel was full. So there was no chance of changing rooms. We had asked for a traditional style room in the old part of the hotel. What we got was a room in the new part of the hotel, which was a poorly lit, minimalist design room with an open plan bathroom and floor to ceiling windows, which made us feel as if we were in a gold fish bowl, with people constantly walking by and able to peer in. You could hardly see your hand in front of your face in the bathroom area.The hotel itself was disappointing. Would it have been any better if we had got the room that we requested? I do not know.

For the next two nights we were in unknown territory. When husband received the vouchers for the trip he noticed that some of them were wrongly dated. The travel agent confidently said to leave it with him. Then it turned out that the accommodation had indeed been booked for the wrong dates. By now it was only a few weeks before we were due to travel and the accommodation that we had originally requested was fully booked. Last minute alternatives had to be found that were of a similar standard. For the first of these nights we were supposed to stay in a small upmarket hotel, but instead we were staying in an upmarket guest house. For the following night we should have stayed in a small hotel, but found ourselves in accommodation which termed itself a country lodge. Both of these last minute bookings were very comfortable and we may even stay in them again, if we return to South Africa and want to stay in that area, but neither were the sort of places that we would have thought to consider when we had booked the trip. So that was two lucky finds.

Our next stop was Wilderness, where again a mistake had been made with our booking, but this time our chosen hotel was available, although not the category of room that we had asked for. Here we got upgraded at no extra cost to ourselves, giving us a  room with a wonderful view of the Indian Ocean. The room was comfortable enough, but again we had an open plan bathroom, which I have to say we are not keen on. I know that we are married, but it is nice to have some privacy when going about our ablutions. At least the lighting was reasonable but who on earth thought up the arrangement of these mirrors. 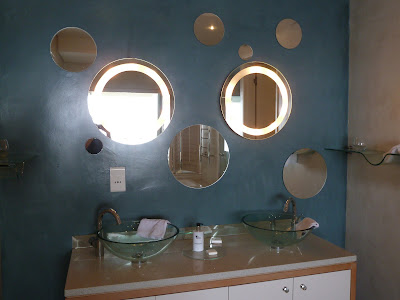 I like to be able to see a body with a head on it - just to make sure that I am in still in one piece. Sadly we only had one night at Wilderness.

Our next three nights were over a weekend and were intended as a relaxing break by the beach, but the travel agent had again booked the wrong category of room, which did not help. What portrayed itself as a five star hotel was in fact a two star B&B (my categorisation) reminiscent of Fawlty Towers. Again we were on the ground floor with big picture windows looking onto a car park, which also allowed people to peer in. So another gold fish bowl room. We had to ask three or four times for a light bulb to be replaced, the window blinds did not fit, the air conditioning was poor, the WiFi was intermittent to non existent, the pillows were hard, the towels were thin and there were ants in the bathroom. And probably worst of all on our first evening the power went off three times in the space of 30 minutes leaving us sitting in the dark. We were glad to leave. If we had had the sea view room that I had asked for maybe we would have felt differently about the place.

Then it was on to Port Elizabeth, where we were booked into a Radisson Blu hotel - not the Ritz I know but safe. Again our bedroom had an open plan bathroom. By now we had sort of got used to them. They seem to be popular in South Africa. In Johannesburg we stayed in another Radisson Blu hotel. This time no open plan bathroom, but our bedroom opened off the main atrium and was noisier than I would have liked. Otherwise both of these were comfortable enough with all the facilities that we expected. Just not as nice as the hotel in Cape Town.

Finally we had awarded ourselves a few nights of rest and relaxation in Mauritius. By the time that I had ploughed through accommodation for all of those stops in South Africa, plus even more when you take in account the places that we considered but did not go to, I was suffering from accommodation fatigue. So we asked the travel agent where he would recommend that we stayed, really meaning whereabouts in the island - north, south, east or west? His reply was to stay at the five star Sugar Beach Hotel as they had an offer on. I had heard of this hotel and it was one of the ones that I was considering, but there was no obvious offer on their website. So I can only conclude that it was a travel agent's offer. Reading the hotel's website it looked to be idyllic with every possible convenience. However, under the soft focus photographs was a very tired hotel desperately in need of refurbishment. Our bedroom had been partly updated, but the bathroom was ancient. The  wash basin plug did not fit, as is so often the case, and it was not possible to have a shower without washing the bathroom floor as well. The air conditioning worked well and there were plenty of sockets, but the lighting was poor, the pillows were lumpy and with an outside temperature somewhere in the twenties at night, we had a duvet on the bed! The food was alright as long as you did not try to eat in the main buffet restaurant in the evening, which was awful. Most evenings we ate in the Italian restaurant, which was a much more pleasant experience with reasonable service and it did not cost us any extra. Otherwise despite having a lot of staff, the service was generally poor. The location on a white sandy beach  was fantastic. There were two swimming pools and plenty of sunbeds both on the beach and around the pools. Apart from the hotel being in need of refurbishment, the downsides for us were that there was an all inclusive option and we would definitely not have gone there if we had been aware of that as we try to avoid all inclusive hotels and the fact that there were a lot of young children there.What we learnt from this stay was that there are five star hotels and FIVE star hotels, which I think that we already knew, but after this experience it is something that we shall never forget.

So how do you work out the standard of accommodation that you are booking? You can spend all the time in the world researching things and still end up with a pig in a poke. The star ratings are a sort of guide. Previous guests' reviews depend on the expectations of the individual. I have read poor reviews of hotels that we consider to be good and good reviews of hotels that we consider to be poor. I would usually read them when doing my research, but I do not believe every thing that I read. My conclusion is that it is all a bit of a lottery and you will generally get what you pay for.

Then there is the issue of do you use a travel agent or do you book the accommodation yourself? Why had I spent all that time poring over accommodation websites if the travel agent is going to ignore what we ask him to book as was the case at some of our stops? And even worse was the accommodation which was booked for the wrong dates. We shall not be using him again. We reckon that we can do it more cheaply ourselves and can book exactly what we want via the Internet.
Posted by cheshire wife at 21:11

I rarely use hotels now...but when travelling and knowing I am going to need one I look at the review sites with my criteria in mind and try to pick my way through the comments made about them.
A friend who travels a great deal swears by her travel agent because he saves her time on doing the research herself....so he can't be the same one you used!