I had wanted to visit South Africa since seeing the film Cry Freedom many years ago. The scenery was spectacular and the colours, especially of the flowers, were so vibrant. At that time apartheid was in force in South Africa and it was also a long way from the UK. Now apartheid has gone and the world has become a smaller place.

We flew to Cape Town, where we had this magnificent view of Table Mountain and the V&A (Victoria & Alfred) Waterfront from our bedroom window. 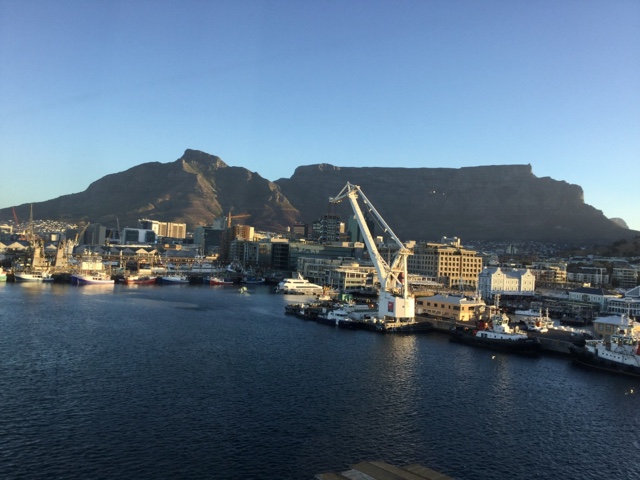 For our first full day in Cape Town we had booked ourselves on a tour of Robben Island, where Nelson Mandela was incarcerated for 18 of the 27 years that he was held prisoner. The whole tour takes about three and a half hours including the 6.9 kilometre ferry journey there and back. The island is inhabited - mainly by former prison warders. In addition to the prison there is a museum and a shop. We were taken around the island on an old coach before our tour of the prison by an ex-convict. The conditions in the prison were harsh and the diet poor. Here is Nelson Mandela's tiny cell. 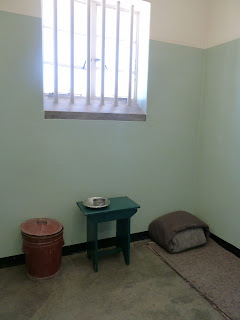 Nelson Mandela's  presence is everywhere in South Africa. His image is all over the place and there are endless streets and squares etc. named after him.

While in Cape Town we took the cable car up to the top of Table Mountain from where there is an amazing  view over Cape Town and out to Robben Island, which unfortuneately is beyond the view of the photograph below. 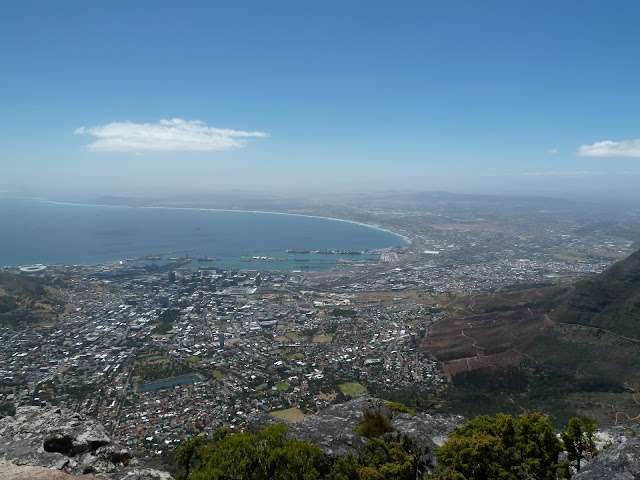 After three days it was time to hire a car and leave Cape Town behind. Travelling east our next stop was Stellenbosch in the Cape Winelands. While here we did a Vine Hopper tour of some of the local vineyards.This is a similar concept to the hop on hop off buses and meant that we did not have to worry about drinking and driving or getting lost on strange roads. We visited three vineyards and could have done more if we had been really keen, but after you have tasted a few wines they all start to taste the same and it was a very hot day. We saw grapes on the vine just about ready to be harvested, vats, barrels and bottling lines and the stunning scenery of the Cape Winelands area. 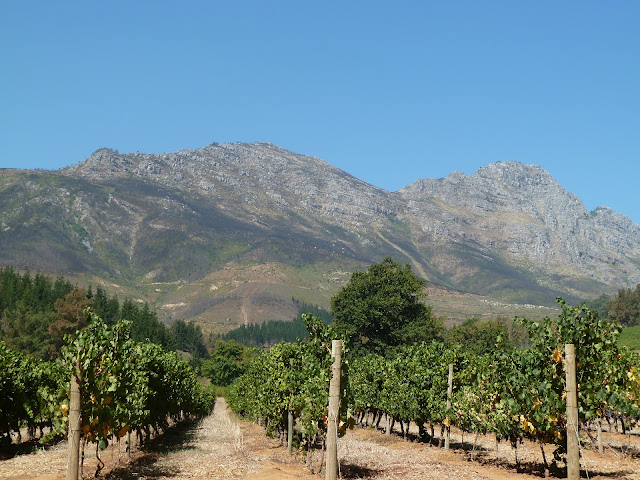 From Stellenbosch we moved on to Swellendam, which was really just somewhere to stay for the night as we made our way further east, along the Garden route. The next morning we took a detour down to Mossel Bay, where we had lunch and got our first view of the Indian Ocean. 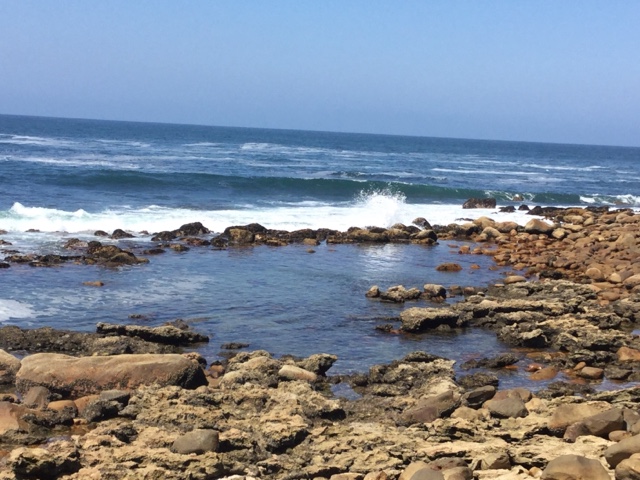 In the afternoon we drove inland to our next stop of Oudtshoorn, where again we only had one night - we could have done with more. My expectations for Oudtshoorn we pretty low and I was pleasantly surprised by the place. If we return to South Africa we shall go back. The next morning we were back in the car again and had not gone far when we were slowed down dramatically by hundreds of sheep being herded along the road. We just had to be patient! 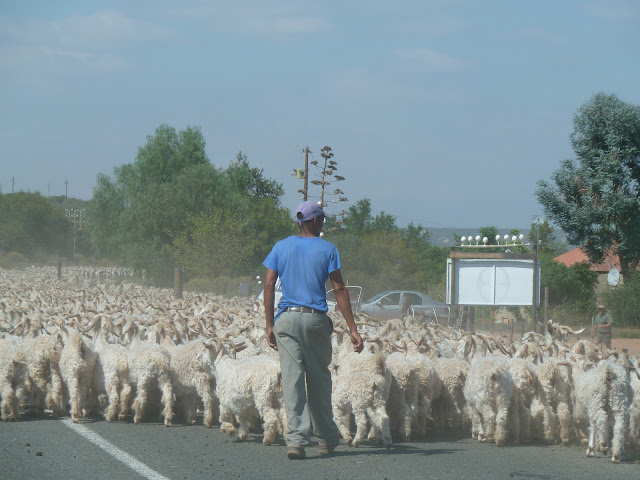 That evening we had another one night stay. This time in Wilderness, where there is not much apart from a spectacular beach. From there we moved on to Plettenberg Bay where there is another expanse of beach washed by the Indian Ocean. Beaches are great to look at and I could watch the sea all day, but I would rather not get sand everywhere. So instead of sitting on the beach we went sight seeing. First to Bloukrans Bridge to see bungee jumping. 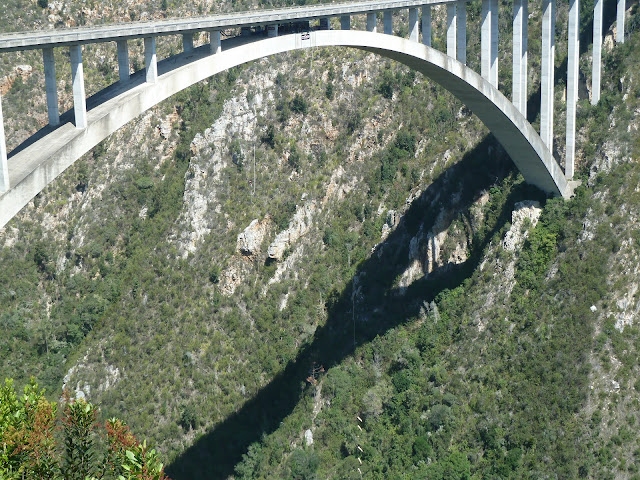 If you look very hard you can just see a line hanging from the centre of the bridge. I wasn't tempted to have a go. We then stopped off at Storms River Village for lunch, where we ate at the fascinating Marilyn's 60s Diner. The decor is 50s and 60s, with neon -rimmed signage, Elvis and Marilyn Munro memorabilia and vintage American cars and motor cycles. Suitably refuelled we set off for an afternoon in the Tsitsikamma Section of the Garden Route National Park aiming to see the dramatic Storms River Mouth where the river meets the Indian Ocean and it did not disappoint. 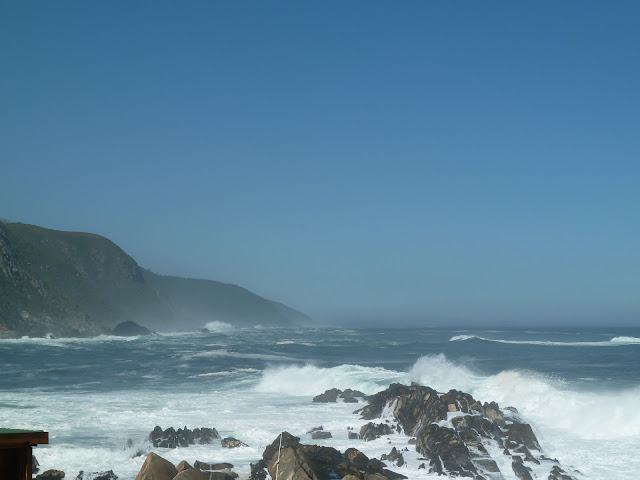 For our final day of sight seeing in the car we drove to Knysna, where the lagoon is quite a contrast to Storms River Mouth. 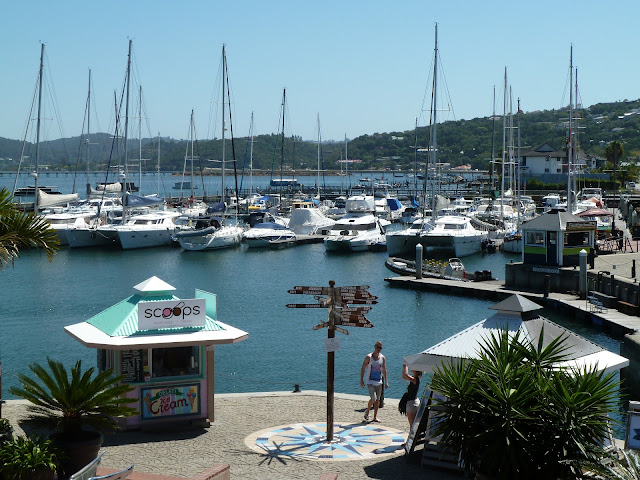 The following day we drove to Port Elizabeth to meet one of husband's friends and his wife, who have retired there. As the name suggests it is a port and industrialised by comparison with the other places that we had visited. I did not have my camera with me as I had not expected that there would be much worth photographing. However, I was wrong as we were taken to a small game reserve not far from where they live, where we saw zebras and giraffes along with other animals native to South Africa. Then we had a drive around Port Elizabeth, which is not a particularly memorable place followed by an excursion into a township called France. By now it was dusk and the light was starting to go. The street lights were few and far between. There were black people and children milling around in the road as well as dogs on the loose. We were three white people in a shiny white car and it was scary. Even though apartheid has gone the black people still live in their townships, the coloured people live together in their communities and the white South Africans live in their estates.

The next day we drove to Port Elizabeth airport, where we handed over the hire car then caught a flight to Johannesburg. We had two nights here, giving us one day for sight seeing. As we were not sure which areas were safe to go to and where the no-go areas were, we played safe and did a hop on hop off bus tour. Like any other big city Johannesburg has it impressive buildings 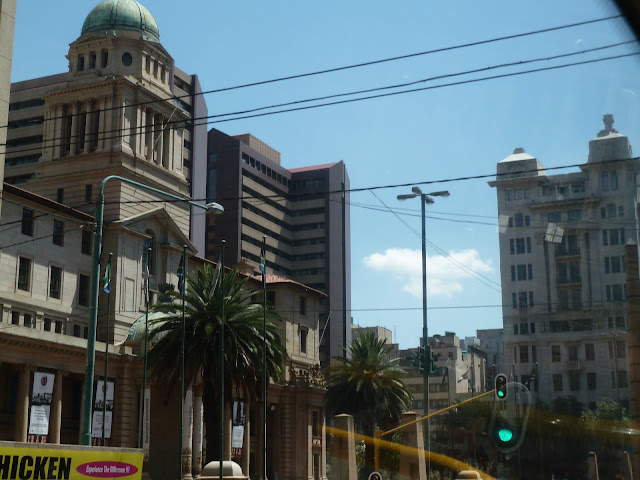 and the inevitable statue of Nelson Mandela in the square named after him. 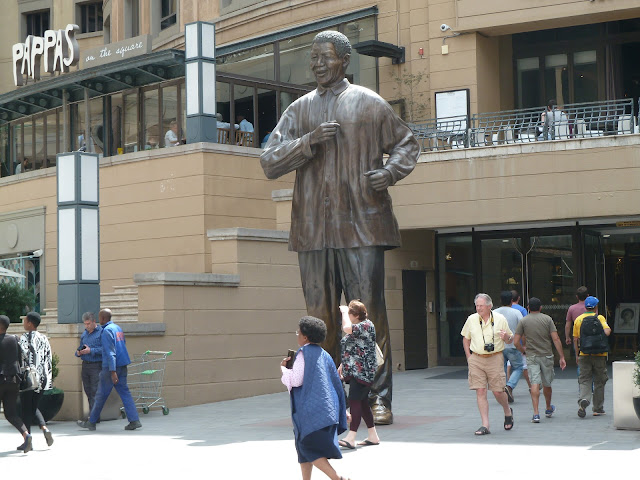 Now we just had the final leg of our African journey to negotiate. Our flight from Johannesburg was at 9.40 am. Because of a protest which had closed the main road to the airport,we had to be collected at 6.30 am for what should have been a journey of about 25 minutes. Fortunately our taxi driver was well aware of the situation and took us via a different route, but he was still concerned that we might miss our flight. As it happened our journey took about 45 minutes. So we arrived in plenty of time. Again we were heading east. This time to the island of Mauritius for a few days of rest and relaxation before returning home.

Mauritius was the icing on the cake and was just what we needed after two and half weeks of sight seeing. The location was stunning - surrounded by palm trees, next to a white sandy beach caressed by warm turquoise sea. The weather was mainly sunny, hot and humid - although we did have some tropical storms. I had thought that the UK was the only country where people sunbathed in the rain, but umbrellas can protect you from both the sun and the rain. 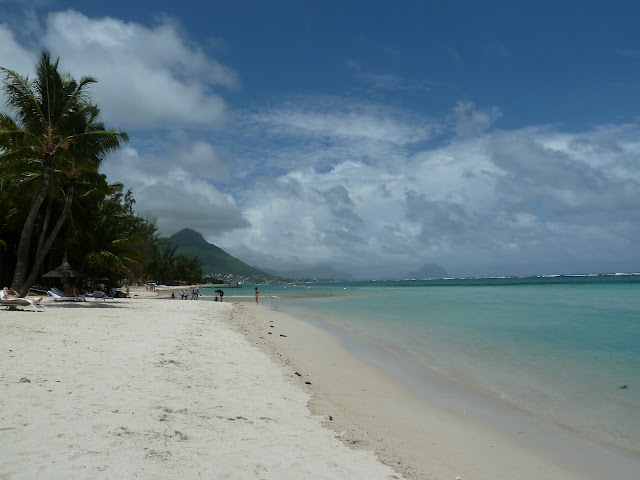 We were both disappointed in the hotel. Despite having oodles of staff the service was often poor and the evening buffet in the main restaurant was just awful. We did not choose the hotel. It was the travel agent's suggestion and he will not be doing that again.

On our final morning we had breakfast, then packed. Husband always packs more quickly than me. He then amused himself by watching the hotel's gardening staff pruning the palm trees outside our room. No safety precautions - just a ladder up a tree. 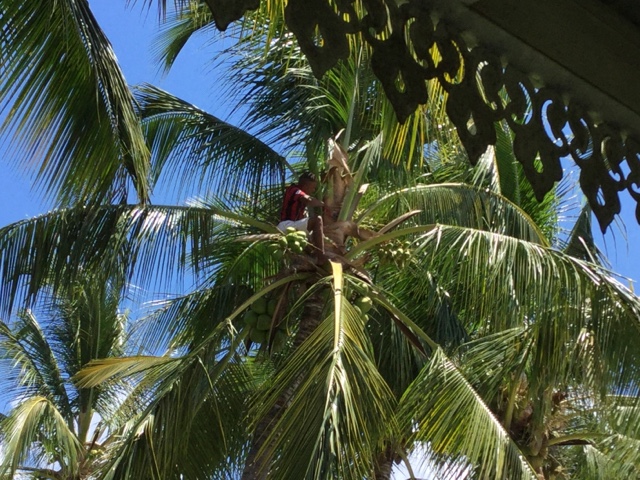 I had intended to entitle this post From prison to paradise but after receiving a comment in Arabic on my previous post Another day in Paradise decided that maybe such a title was not a good idea.

What an amazing trip! As people always say, it is a beautiful place and your photos confirm this. Mandela was certainly a towering figure, not only in South Africa but the world. One of those people who occurs perhaps once in a generation and will be remembered forever. I am sorry the hotel in Mauritius was not good. Perhaps you could mention its name, so those who might be recommended to go there by travel agents on commission, can be forewarned. Truly this was the trip of a lifetime.

Jenny - thank you for your comment. I shall be writing another post about the accommodation lottery shortly.

I am guilty of not having visited your blog for many months, so just enjoyed a lovely catch up. South Africa is still on my bucket list, so a great virtual trip thanks for sharing.
It was a nice surprise to see a blogger from the past comment on my recent Travel Tales post, enjoy Pafos when you go later this summer,

What an amazing trip!