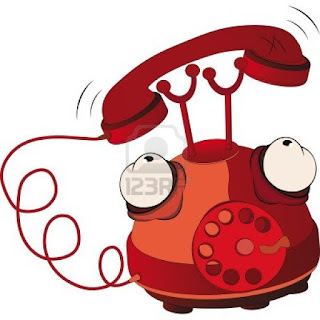 Always keen to get things sorted and move on, I spoke too soon about our telephone/broadband problems being sorted, when I published my previous post.

The afternoon, that the new master socket was  installed in the study, was very cold and wet. I had been to he hairdressers in the morning so was not keen to hang around outside looking at wiring or watching what the engineer was doing. He was in and out of the cottage and I was happy to leave him to it, as long as he shut the door, as the previous weekend we had had a mouse in the utility room. He did explain to me what he would be doing but deciphering telephone engineer tech speak is not my strong point.

The old master socket was in our bedroom. Don't ask why. A previous owner had it installed there.Then you have to take in account that our cottage was originally two cottages. It looks to us as if there were two telephone lines at some point in the past, but now all the telephone points, that we have, are on the one line. When they work we have a total of seven telephone points, but we have never used all of them. The cottage had five telephone points when we moved here and we have added another two in locations where we wanted them. Most of the time we have four phones around the house with only one set to ring. However, recently two, including the one set to ring, stopped working. It took us a bit of time to work this out. Both went out and I purchased a cheap replacement from Argos until we get around to sorting things out properly. At least it rings when it is plugged in. I have to admit that I unplug it when we go to bed and do not plug it it until after breakfast the next morning. That is the legacy of numerous unreasonably timed and unwanted calls. So I expect you are wondering what the problem is. Shortly after I had published the previous post I picked up the answerphone handset which is not set to ring, to answer a call only to find that the other phone continued to ring and I had to pick up the ringing phone to answer the call. This has happened before. So I did not think that it was too unusual. Shortly afterwards I tried to make a phone call from the answerphone handset, but there was no dialing tone. I thought that we had another broken phone. I mentioned this to husband when he came home. He soon worked out that the BT engineer had taken away the wiring from he old master socket and the point, that the answerphone is plugged into in our hall, is wired from the old master socket. Hence we now have three sockets that do not work and no messages on our answerphone!

Husband was not terribly surprised to discover this and it should be easier and more economical to ask our electrician to sort out the wiring. When we approached him about our broadband problems last December he could have come the following week, but it was not convenient with us. Now he is booked up for weeks and we are going to have to wait for him to find the time to fit us in. For the moment the answerphone is plugged in to one of the working telephone points which is not as conveniently located as the hall, so I have to remember to look at it from time to time.

Hello:
All of this sounds hugely complicated and how very annoying and frustrating for you that the problem, far from being solved, is ongoing.

We long ago gave up on an answer phone, hating that red flashing light and a voice that announced we had twenty-three messages!

It is to be hoped that you will, one way or another, be sorted out properly before too long.

How annoying that you knew exactly what you wanted but you didn't get that service at all.
Hope you manage to call them back to complete the job.It can be a nightmare.
Maggie x

Why am I not surprised!

Good luck, I think you'll be needing it. :o)

We have done away with the answerphone. If it is urgent, people will ring again.

I have not forgotten the drunken engineer from France Telecom who started to rip out our wiring before being booted outside.

The fault was on their box down the road.

Hope your problems will be solved soon!

Have a lovely evening.