Life in the doldrums

We rely so much on computers now. They have taken over our lives and now living without one has become difficult, restricting and at times tedious, but life has to go on regardless. Well, I have not actually been living without a computer for the last two months but our broadband speed had dropped so low that some days connecting to the Internet was impossible. That always seemed to happen on days when I really needed to use the computer. It would wouldn't it. Thankfully all that changed a week ago when the problem was fixed. I did not rush back to my blog straight away as the BT (British Telecom) engineer said that it might take a week or two for the broadband speed to stabilise and I wanted to be sure that there would be no further problems. So here I am with fingers crossed that there will be no further problems.

Having in laws to visit is not all bad. Husband’s sister and his  brother in law (BIL) came on Boxing Day. During the day the conversation inevitably turned to the thorny subject of our broadband problem. BIL volunteered that their broadband problem had been solved by having BT move their master telephone socket into the study and he was even able to quote the price. The next day husband phoned up BT and arranged for our master socket to be moved. The only problem being that they could not do the work until the end of January. I had suggested this as being a better solution to our problem than having to take up floor boards and three carpets, but BIL’s advice obviously carries more weight than mine as my suggestion fell on deaf ears.

Entertaining over, on 27 December I took down our Christmas tree and decorations and on 29 December we joined the jet set and flew off to Valletta in Malta for New Year. Not the real ‘jet set’ I know but we flew with easyJet. Malta was warm and sunny and a definite improvement on a cold and wet Chester. We were staying in the old walled city of Valletta, a designated World Heritage Site. Our first day was spent exploring its' sights and enjoying the sun. 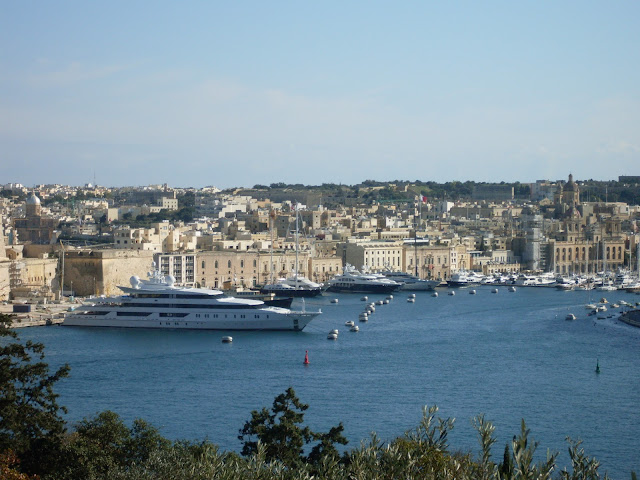 The second day which was New Year's Eve, we caught a bus with the intention of going to St Julian's but missed the stop and ended up at the small resort of Golden Bay on the other side of the island! 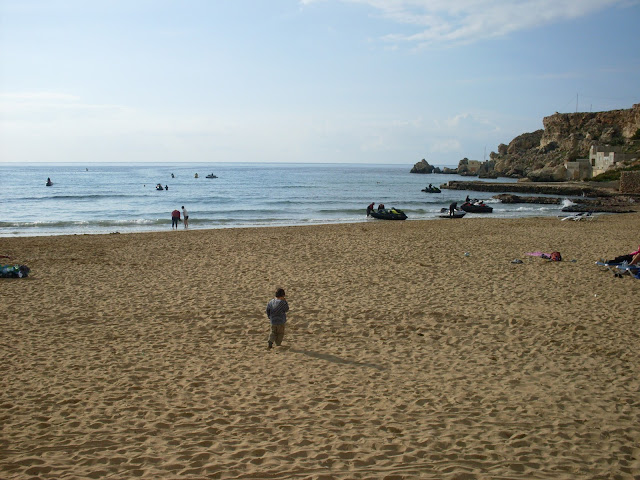 Luckily there was a restaurant there where we had a bite to eat. We did not have to wait long for a bus back to Valletta and by mid afternoon we were back there. Now we needed to book a table at a restaurant for our evening meal. By a stroke of luck we managed to find a restaurant that had just had a cancellation. It was New Year's Eve so the cost was astronomical and we had to pay a hefty deposit. Walking back to our hotel we noticed stalls being set up in preparation for the evening's festivities. We need not to have worried about going hungry that evening, as we could have feasted on hot dogs, pizzas and soft drinks from the stalls, for a fraction of the price that we were to pay for our meal. Then there was this stall of pastries which were very tempting. 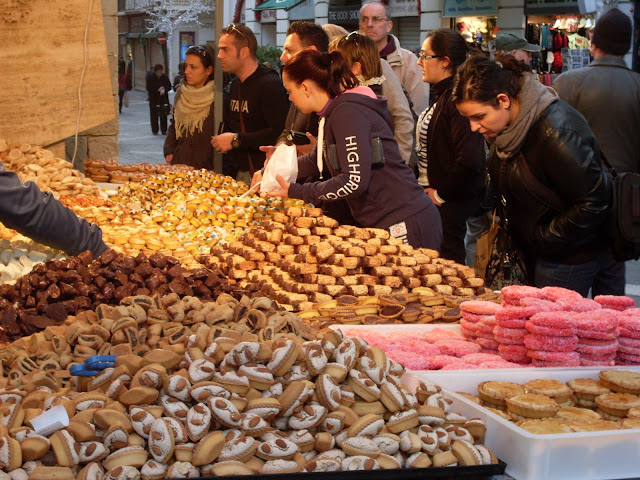 Our three day break was over all too quickly and before we knew it we were back in damp England. It was a pleasant break and we shall probably do it again as we now have very few family ties and only have to suit ourselves.

So we were  back to the mundane and humdrum of life in January. Short, cold, grey days and the remnants of the January sales. Before being plunged into the full horrors of a freezing British January we were lucky enough to have a few mild days which allowed us to get out into the garden and finish off some of the  Autumn jobs that had not been done. Then we had a spell of very wet weather before the cold snap set in. And for a few days this was the view from the kitchen window. 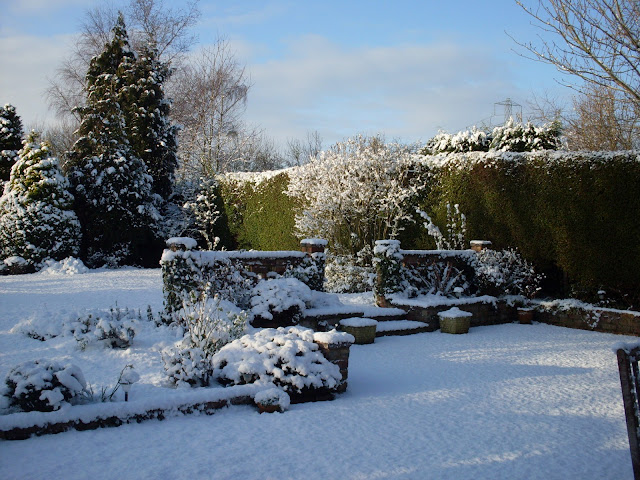 It looks very pretty I know. It was also very cold. Thankfully it did not last very long. Because it rarely does go on for more than a week, we are really not geared up for it in this country. Now we are back to grey, wet and muddy. We are never happy with the weather that we get.

It is now a year since I retired and life has settled into a bit of a routine. Things have not gone to plan. They rarely do and I know that the routine will not last for long. This term's flower arranging class, which is run through the local adult education college, will be the last as the teacher has grown weary of the red tape which working through the college involves. Whilst working I relied on my trusty osteopath to keep my creaking back in working order and have continued to go to her on a less regular basis since I retired. Last month she calmly announced that she will be retiring at he end of this month. Recent visits have been a bit of a luxury so I shall try to manage without her, but I shall miss her. Then last week my hairdresser told me that she was leaving to go to a salon on the other side of Chester. A first I was dismayed, but now that I have given the matter some thought I plan to try one of the other hairdressers at the usual place, as it is convenient and I really do not want to have to travel across Chester. She may have even done me a favour as she has been at bit erratic recently. This week I had a letter from my dental surgery cancelling my next check up appointment - my hygienist is leaving, which is not so bad, but you do get used to people. As I said earlier, life has to go on. Most of us do not like change but sometimes it can be good for us. There will be a new flower arranging teacher and maybe a different hairdresser will be better than the last one.
Posted by cheshire wife at 09:00

Hello:
There is something rather comforting about routine and the assurance of familiar faces around one but, as you say, change is all part of life's rich pattern and, with it can come unexpected delights. We hope that you will find it so, including the new internet connection....surely faster than ever....we trust!!!

Oh dear...... its always difficult to cope with changing so many different organisations/trusted people, especially when everyone seems to be going at once. I know this has happened to me several times. Somehow or other,though, I always seem to get someone just as good. Hope this happens in your case.
I also had the same problem as you with slow Broadband, making blogging so difficult. but the one I have now is very fast.
Maggie x

I think I've been lucky with my BT broadband here in Havant, but now I know BT Infinity (fibre optic) is on offer to my street, and will cost me slightly less, I shall be getting that done on March 11th !! Wish me luck?! lol :)

It is somewhat disconcerting when all of the dominoes fall at once...but it can lead to better things!

We do get very used to people. I have had the same hairdresser for 20+ years, she's almost 50 now but is very young in her outlook and really keeps up to date with the latest styles. I have recommended her to so many people because they always comment on how great my hair looks. I'd be devastated if she suddenly decided to give it all up! :0

Here in 'sunny Wrexham' we have now upgraded to BT Infinity but, fortunately, we haven't ever had any serious problems with the internet. We'd miss it like crazy if we didn't have it. :)

Here in rainy Staffordshire w too have broadband problems. Tim works from home so good download and upload speeds are essential. e've battled on with Orange but are changing to BT. Sadly no Infinity here yet.

I expect we'll have HS2 at the end of the road before we get that...

I'll mention your advice about the socket.

PS Of course I mean 'we' and 'we've'! Dodgy keyboard - some keys need to be thumped.

Thank you for your kind comment on my blog! What a lovely break you had after Christmas. Malta looks like a beautiful island. Glad to hear your internet connection is working the way it should again. I couldn't do without it any more.

It amazes me that whilst we have no mains gas in our village we have broadband!

My family lived in Malta when I was a teenager. It was much less built up then than now but it was always wonderful to get there for the Christmas holidays and find roses and bougainvillea blooming by our house. It was usually a bit too cold to swim though.

I'd be happy for it to snow until april and then spring arrive, it doesn't work that way though does it? We do wind and rain well on the Wirral don't we?