On the road again

Life, illness and death have crossed my path in the past few weeks. I am aware that I have not posted for over a month. In that time we have also been away to Brittany in northern France. Our holiday weather was not great and the hotels were disappointing but we saw sights that we had not seen before and had a holiday that we shall not forget.

Late Saturday morning on September 3 found us on the motorway again. This time we were heading for Plymouth from where the Pilgrim Fathers set out for the New World all those years ago.  We were not  travelling so far. Our destination was Roscoff in northern Brittany, just over the English Channel. We arrived in Plymouth late afternoon and after settling ourselves into our hotel room, went out to stretch our legs. Our hotel over looked the Hoe, but as preparations were well under way for the  America's Cup World Series, which was being held in Plymouth Sound from 10 to 18 September, there was not a lot to see. I am not sure that there was even enough space for a game of bowls. 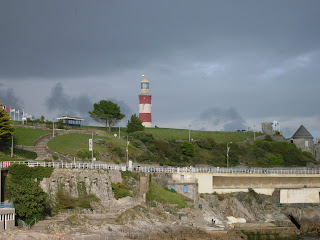 That evening we had a very good Greek meal in the harbour area. Then after a nightcap it was an early night as we had to be up bright and early the next morning, to catch the ferry.

The ferry crossing was uneventful and by about 4.30 pm we were in our hotel over looking Plage Saint Guirec on the Cote de Granit Rose (Pink Granite Coast). So called after the dramatic russet rocks along this stretch of coast. Here our hotel bedroom was more open plan than ensuite with only a glass panel separating the bedroom from the shower room. Thankfully the small room had a door to it. I know that we are married, but it is nice to have some privacy. 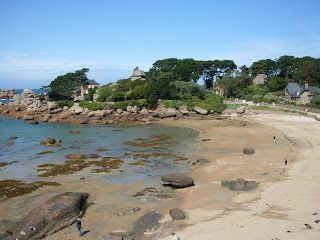 The following day we awoke, rather surprisingly, to a clear blue sky with the sun beaming down. We decided to make the most of the weather, which despite the sun was cool and windy, by walking along the coast to the next beach, which took one and a half hours each way. This is the best way to see and appreciate this spectacular coast line. 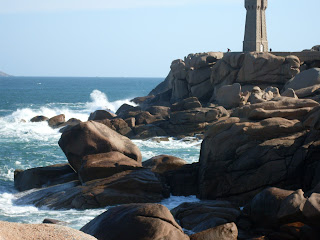 It is takes three hours to walk the length of the Pink Granite Coast which we could have done, but we then would have had to walk back again as we could not see how we would get back otherwise.  The next day, Tuesday, was wet and we decided to explore the area by car visiting Paimpol, Lannion and Treguier. All pleasant little harbours which I did not photograph as it was raining.

On Wednesday we moved south down the coast to Concarneau, which is certainly not the prettiest place that we visited. It is more of a port than a holiday destination. 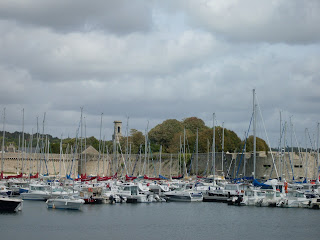 Our hotel, on the outskirts, over looked this white sandy beach which unfortunately is spoilt by the green ridge of seaweed washed up by the Atlantic. 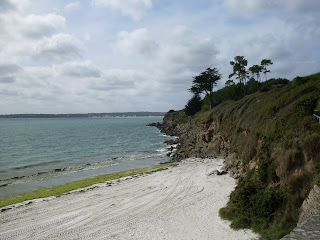 On Thursday, again, it was damp. As we had planned, we visited first Pont-Aven, 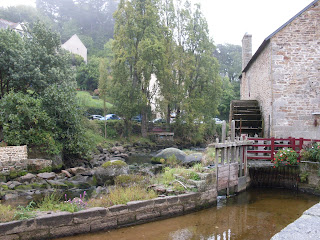 which is a very picturesque riverside town where many of the 19th century painters, including Gauguin,  lived. Despite the grey, damp weather this place looked amazingly pretty. With a blue sky and sun I am sure that it would look stunning. 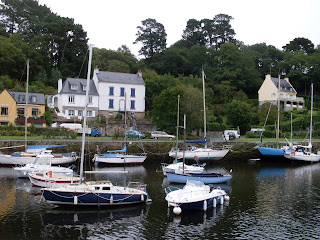 Next it was on to the historic city of Quimper, famous for it's twin 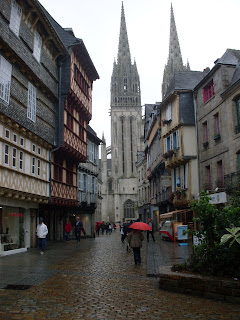 spired Cathedrale St-Corentin. By now the weather was dismal, as you can see in the photo to the right.


On our last day before we started our journey back home we visited the seaside town of Carnac, where once gain we had to contend with drizzle and mist as this photograph of the beach shows. 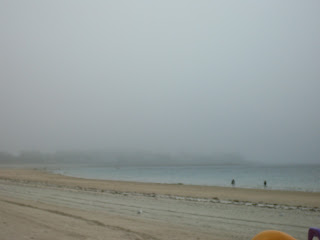 However, it is the complex of mysterious megaliths on the outskirts of Carnac that attract thousands of visitors every year. 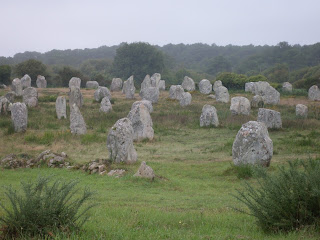 There are approximately 2,700 stones arranged in three main groups of alignements (rows of standing stones or menhirs) - Menec, Kermario and Kerlescan.

On Saturday morning we packed our bags and set of back to Roscoff. We were there by lunchtime which gave us the time to have a look around. The 'Onion Johnnies' are long gone, but we did see this bicycle. 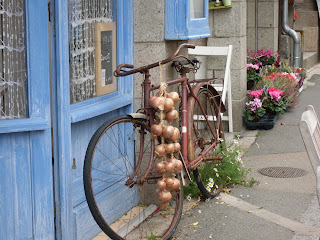 On the final day of our stay in France the weather was fine. It obviously knew that we were about to go home. 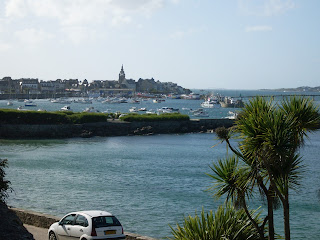 Another Sunday morning and we were up bright and early once again. Only this time I was not so bright. Something that I had eaten the night before had upset me. Not badly, but I was feeling a bit fragile. I was alright until the ferry was about ten minutes out of Roscoff. There was a swell on the English Channel that day and I started to feel sea sick. So I spent five hours of the ferry crossing watching the horizon. My brain just froze and would not think about anything. I knew that there was no point trying to do any of the reading that I had planned to do while on the ferry. This experience has put me off ever wanting to go on a cruise.  Five hours of feeling rotten was enough. I could not cope with two weeks of it.

As I mentioned earlier, the America's Cup World Series was being held in Plymouth when we returned on September 11. As the ferry came into port the safety boats came out to keep the competing catamarans out of  the path of the ferry and we had a pretty good view of the competition as the Hoe once gain came into view. 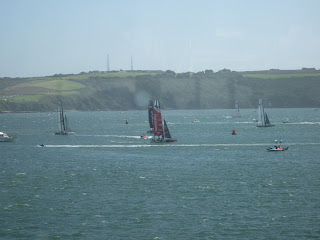 Soon we were back on English soil and on the last leg of our way home. If the ferry had been delayed we had considered spending Sunday night somewhere between Plymouth and Chester. We arrived on time and in any case we wanted to get home. Sadly my mother-in-law died while we were away. She had been in hospital for a month but her death was unexpected.
Posted by cheshire wife at 08:00

Enjoyed looking at your pictures ... hope you feel better now. How awful to receive the unexpected news about your mother-in-law.

Interesting adventure in Brittany. I'm not likely to ever get there, so it was nice to see that part of the world.
Sorry to hear that you were so uncomfortable the last day.
Condolences to you and your husband on his mother's death.

Maggie May - you are right. Life never runs smoothly for very long.

Valerie - I was feeling better by the time we reached Plymouth but five hours of feeling seasick was enough for me.

Rob - we now know to avoid a cheap restaurant. One way or another you pay for what you get.

So sorry to hear about your MIL, that must have been a terrible shock to come back to.

Loved your photos, it's great that you didn't let iffy weather stop you from seeing what there was to see.

We've stayed in a hotel where there was just a glass wall separating the bathroom from the bedroom - it's a bit disconcerting isn't it?;)

I love France and indeed 2 weeks ago we were returning home on the ferry.
Sorry to hear about your MIL xxxx

I just dropped in to thank you for stopping by 'my place'and leaving such a lovely comment. I hope that we visit each other often, blog-wise!

You take beautiful photos. I hope someday you will let me "copy" one in watercolors, like I did with Maggie's.

Our sincere condolences on your mother-in-law's passing. My favorite Aunt passed away while we were on vacation...a sad memory among all the wonderful ones. My heart goes out to you and your husband.

My condolences to you. Oh dear what a shame about some of the holiday weather, then finishing your holiday with sea sickness and a death to cope with, sounds like you need a holiday. I enjoyed the photos though.

Akelamalu -yes, the glass wall is disconcerting. It was in the brochure. So it was our fault for not reading it properly.

mrsnesbitt - I would not go so far as to say that I love France.

Clare Dunn - I may take you up on the offer of the watercolour.

LLM - pleased that you enjoyed the photos.