Around here, Monday 4 July was the hottest day of the year so far. When we left home to drive to Manchester, about 6.15 pm, the outside temperature was a balmy 25 degrees centigrade. The concert did not start until 8.00 pm and we thought that we had allowed ourselves plenty of time but the traffic in Manchester was heavy, which meant that it took longer than we had expected to get to the concert arena. However, we still had 30 minutes to spare. As we approached the MEN arena husband decided to ignore the sat. nav. and park in the multi storey car park next to the arena - big mistake! We had previously parked there and had managed to find a space on one of the lower floors. This time we crawled up nine floors, to the roof, before we found a space.

Joining the queue to get into the MEN arena we had the chance to observe fellow Neil Diamond fans both male and female, who come in all shapes and sizes aged about 21 to 81. Once inside we took our seats and waited. The auditorium was warm and getting even warmer as it filled up.The start of the concert was delayed to allow members of the audience who had not taken their seats to do so and still people were coming in after the concert had started. Why buy tickets for a concert and miss some of it? 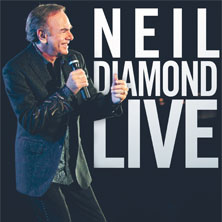 Eventually the concert was about to start. The band and backing singers had taken to the stage. Then the arena was plunged into darkness. We had been warned that this would happen. The band started to play but where was the man that we had all come to see? As the spot light picked him out in the centre of the stage the audience rose to its' feet and greeted him with rapturous applause. He began with Soolaimon - husband's favourite followed by Beautiful Noise which is my favourite. After that I was enjoying myself too much to remember exactly what was played when. At the end of the third number Neil Diamond paused for a drink of water and commented on how hot it was up on the stage with the heat from the lights and went on to say that the air conditioning must be 'malfunctioning' and he would like it on. He played another number then stopped again and complained about the heat. At this point a fan threw him a water spray which he used to spray his face and whilst doing so said something like 'right now this is as good as sex'. After the fifth number he said that the conditions on the stage had improved. The auditorium was also noticeably cooler. After that the concert passed uneventfully. Neil Diamond was on good form, relaxed, amusing and thoughtful. Despite the heat we enjoyed a wonderful evening's entertainment spending more time on our feet than we did in our seats. It is hard to believe that Neil Diamond is 70 years old. Nowadays, there is not so much hair and the voice is a bit lower and deeper and sometimes a tad ragged, but he could still melt an iceberg.

All too soon the concert was over and we were back at our car on the roof of the multi storey car park - big mistake, as I said before. By now it was 10.20 pm. Marshalls at the car park empty it from the ground floor upwards. On the car radio Johnnie Walker was interviewing Neil Diamond. It was slightly surreal to hear the voice, of person that we had just seen on stage, coming out of the radio. Never mind the spookiness, listening to the radio passed the time. It was 11.15 pm by the time the cars on the ninth floor started to move. It had been a night to remember for more than one reason.

(Hot August Night is the title of a Neil Diamond album released in 1972 which I amended accordingly).
Posted by cheshire wife at 08:00

Lucky you to be at the concert, it was well worth those minor inconveinces I am sure. Amazing that he is 70 and still drawing in the fans across the generations.!

I would have loved to be there. But it's a bit of a trip from the west side of the Pond. Sigh.

He has such an amazing, unique voice. I have been a fan since the sixties.

Sounds like it was worth the inconveniences. If we're going to the MEN we always park in a side street on Cheetham Hill and walk down to the arena - that multi storey is a nightmare!

Rob - Look out for a concert nearer to home.

Jennyta - I never get tired of listening to him.

Akelamalu - thank you for the parking tip.

Oh... Neil Diamond! You were lucky.
He still is a great guy, isn't he?
I can remember him when he was young!
Maggie

So pleased it was a good show, I've never been to a big arena event but I have seen some great stars over the years. Nothing beats actually being there.

WE were away on holiday or we'd have been there too. Really enjoyed his last concert. I parked on the top level of that car park when I went to see Keane with my daughter and it was three hours before we started to move!

Jenny - you are right. Nothing beats being there. The atmosphere in a large arena, when a good live performer is playing, is electric and Neil Diamond is one of the best.

Deb -you missed an unbelievably good show - better than last time I think. So 55 minutes in the car park wasn't bad

Husband and I saw Neil Diamond at Birmingham NEC about 14 years ago. A fantastic performance we will never forget. He definitely still has "it" so I can just imagine how much you enjoyed it CW. Wonderful! A x

SJA - it is hard to think of another performer who is as good as him.

All the way from Australia, I too enjoy Neil Diamond's music and remember it well from earlier years.

You sound so patient the way you desctribe getting out of that car park, i'm not so sure I could be but the cpncert sounds as though it was worth it. It's so cold here now where I live in Melbourne, it's hard to remember such warmth, though I imagine our summers get much hotter than yours.

Elisabeth - thank you for visiting my blog. Pleased to meet any fellow blogger who is also a Neil Diamond fan.

Wow! I enjoyed this so much - I felt as though I was there! A great review! Yes - multi-storey carpark issues too at the Take That Concert!!

I've never been to a big arena event but I have seen some great stars over the years. Nothing beats actually being there.
xlpharmacy reviews