Cheshire is now famous for more than just Cheshire cheese. This week it has become famous or perhaps infamous for rock salt as the UK continues in the grip of of the freeze, that has taken hold of the country. Lorries from all over the country are queueing up, at two salt mines in the Cheshire towns of Middlewich and Winsford, for supplies of rock salt to grit the country's road. Despite the fact that the Cheshire salt mines are working at maximum capacity the country is rapidly running out of salt and the government has had to order stocks from abroad. Councils have been asked to reduce gritting levels in order to conserve supplies and we have been advised not to go out unless necessary.

As staying in has become the new going out I have decided to bore you with some photographs of where I live. In the past I have turned a blind eye to requests for photos as I wanted my blog to be read for want I wrote, also when I started my blog I did not have a digital camera. In addition, where we live does not look very pretty for most of the year but snow does a wonderful job of transforming an ugly duckling into a winter wonderland.

Let's start by turning right out of our drive and walking down the lane. I have used this view of the lane before but this is the first time since we moved here that we have had snow. 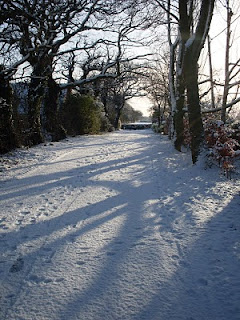 At the end of the lane if we turn left we can see the crossroads. 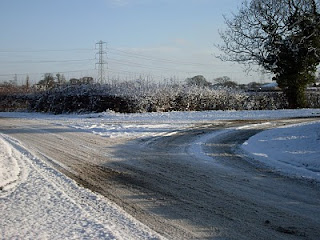 Turn right and we get this view in the other direction. 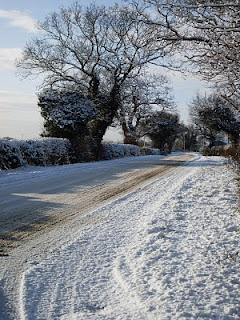 Then if we turn ourselves right again we can go back up the lane. 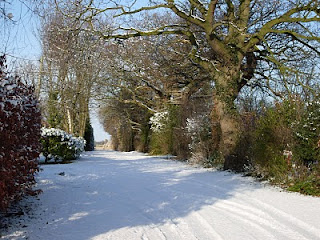 There are three houses in the lane and our cottage is the second house. It was originally built as two farm workers cottages for the farm that our garden backs onto. Previous owners of the cottage(s) have knocked the two cottages into one. It has also been extended and the inside rearranged it. It is not the prettiest of cottages. If you were expecting a thatched roof and wooden windows I am sorry to disappoint you. We live within walking distance of the Welsh border, so we have a slate roof and we have made the mistake of putting in UPVC windows, which we have to live with until the next time that the windows need replacing.
Posted by cheshire wife at 16:14

You might be bored with the same sights, but we are eager to see them. Do post pictures; they add to the words.

Well, I liked your pictures. They complemented your writing. It's awful about the salt and grit, I can't follow the sense of some of the decisions.
Conditions here are very similar to yours, I'm now snowbound and housebound, but enjoying the wildlife that we only get to see once a year.

You live in a lovely setting in a lovely home. Just the darned snow we are sick of.
Good to see your photos.

I have so enjoyed looking at your pictures, memories of "home" came flooding back.
I didn't know there were salt mines in Cheshire...duh.
I always enjoy your posts, pictures just make them more so.
Your cottage is just perfect, my heart flutters.
Stay warm !
Jo

Lovely photos. It's amazing how different places look after snow.

Snow can make even the most mundane street look magical - well it has where I live. LOL

It is good to see where you live CW and it certainly looks lovely in the snow. Perhaps you could let us see seasonal shots as the year progresses? Hope you are keeping warm.

Nothing changes the scenery more quickly than a snowfall. It's like magic happens. And then just as quickly that "Magic" disappears when you have to shovel for the umpteenth time. ;)

Lovely shots. You folks sure are getting an unusual amount of cold and snow. You'd think you were here in Canada. :)

those are pretty photos, you live in a lovely area. I'm the same though, thinking people will be bored by my photos as well.

I agree, a good layer of snow pretties up the most boring of landscapes. We still can't get out, so we have to be content with a snowy car and the dustbin to look at. There are some footprints too which I would guess are the foxes that visit.
Love Granny

Your photo's are great!! I love seeing where people live and your place looks lovely!

The road situation is pretty grim isn't it! My mum was telling me that in Glasgow they have not put enough salt in the grit so even the stuff that they are putting out is not working....rediculous!!

Super photos. It's starting to melt here in Pensby this morning but there's still enough snow around to get a photo or two before it goes all black and slushy and horrible.

You know, in all the years I lived in Cheshire I was only vaguely aware of the salt... I've heard more about my former county in the last few days then in all the years since I left! Mind you, my bit wasn't as pretty or as rural as yours.

I love photography so am really pleased you have decided to break your rule. Lovely photos.

Your part of the world looks charming, even better on a sunny day I imagine. Those of us getting the benefit of Cheshire salt are really grateful however limited it may be.

Even the crossroads look interesting in the snow!

Do you shop at that Tesco neat Chester with all the signs in Welsh, with English underneath? That threw me completely when I went there once on the way to a holiday - not only were all the aisles different and things in different places, the whole lot was in Welsh!!

awesome photos,
read some snow Haiku in my place,
feel good about your place.

Gilly - if you mean the Tesco at Broughton Retail Park, yes I do sometimes shop there.

Lovely photos! Its true that snow really changes a landscape--its fun to see our homes and environments in a completely different way.

I think photos can compliment the posts. Enjoying your writing as well!

I love seeing where people live so I'm glad you got that camera out. I can't upload photos atm for some strange reason but they are pretty much like everyone's - lots of snow. :)

It's a beautiful scene you have there - some lovely trees and as you say the snow does help the beauty along some!

Cheshire cheese, Cheshire cats — now Cheshire salt. Marvelous. If you have to assault the ravages of winter, where better to start than at the salt mines?

Rob-bear - maybe. The inside is difficult to photograph and there isn't much worth seeing.

how interesting to see these photos! i'm now wondering if i have ever driven past your house, it does look familiar!

CG - you are unlikely to have driven past our cottage as the lane is a dead end and we can not be seen from the cross roads.