Last week when I was confined to barracks by the weather I got round to unpacking a cardboard box that had been languishing in our utility room since the end of August. The two other boxes that had accompanied it were unpacked some time ago. Their contents washed and given a home. After four and a half months I was no longer sure what this box contained. As it happened it contained my parents' crystal glasses which my Father had promised to me some time before he died. Now everything was unpacked and my mind went back to the end of last Summer.

Late August of last year husband and I found ourselves on the road to West Sussex, yet again. This time we were going to my Mother's bungalow, in East Grinstead, to do some sorting out and tidying up. My brother had already started the ball rolling on getting the bungalow ready to sell, by sorting through all of my Mother's papers and SIL had done some cleaning. On previous visits I had sorted out my Mother's clothes. Before we got down to the business of cleaning, we had a good look at the contents of the bungalow and decided what we would like to have. It was like being a kid in a sweet shop. All these things that I had had my eyes on for years were suddenly there for the taking. I suppose because Mum is till alive, it was a strange experience. Would she approve? What would she think about me taking things? We placed our booty on the dining table then panicked that it would not fit into the bags and boxes that we had brought with us. Miraculously we just managed to pack up all of our haul. Then it was down to the job of cleaning. It was a chore, but I dislike intensely dusty, dirty and untidy houses and I have done it twice before when Mum had been in hospital. This was to be the third and last time. Once we had removed a couple of pieces of furniture that we were going to give a home to and I had rearranged the ornaments the whole place looked cleaner and tidier. Ever since my mother moved there, fifteen years ago, it had looked cluttered, with more furniture that she needed and too many ornaments, as she refused to part with anything.

There is still quite a lot of stuff in the bungalow and I could be tempted to give a home to some more of it but my brother has already complained that I have taken more than him. I have taken the view that our parents would rather we gave a home to their possessions than allowing them to end up in a charity shop. Otherwise it will be the tip, or for a few items an auction sale room. 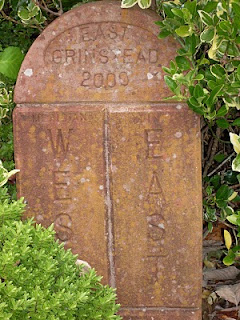 That stone should make it easier to find the place after a night at the pub. Interesting.

Very interesting about the Greenwich Meridian Line.
Interestingly we drove past a marker on the French motorway a few weeks ago marking it.

It's traumatic going through things and choosing what your going to take and what is going to be left!!

There was an item on the Meridian line on the local news last night, how coincidental was that?

Clearing up your parents home is a chore that most of us face eventually. I intend to give our stuff to our children before we go, [as if I know the date hehe]
Much better, as you say to give a home to much loved pieces than dump them.

I feel for you having to go through your mother's home, CW. It must have felt strange but a job that had to be done. I helped my husband when he had to go through his aunt's home when she went into care, it felt very odd.

I have already had to face this with my own mother and it brought back memories of that.
The Greenwich Meridian Line is really interesting and the stone is lovely.

lakeviewer - it is a long time since my Mother went to the pub in the evening.

Moannie - you can not take it with you, you know.

I'm surprised the stone is so new. Your post is very interesting, CW.
It must feel strange going through someone's home. I never had to do it, my Mom died in Australia just prior to sailing back to the UK. Her goods and chattels were already on the ship so they came straight to me.
I have already started to chuck things I feel won't be of interest to the family, photos sorted, etc. Thought I'd try and help out before I go....

One of the things Jo and I have started to do is an inventory of where things came from, what family significance they have, etc. They may still end up in the charity shop but at least the children will know where they originated!!

I didn't realize that there was actual Greenwich Meridian Line markers.

Glad you got your mother's house tidied up, should make it easier to sell I guess?

I was going to comment about this post till I saw a picture lower down.... Have you walked the Staffordshire Way that starts at Mow Cop? Walked part of it last year from there back to my house which is just off it.

Valerie - it is difficult sorting out a loved ones possessions what ever the circumstances.

Fire Byrd - we have not walked the Staffordshire Way. We don't live anywhere near Mow Cop folly.

Brilliant, I'd love it!

Remember doing the same thing with my parents place when they moved into a care home. As only child, it was both easier and more difficult. Many items from my childhood have found their ways to our children's homes, where I think/hope they will be well used and cherished.

That little sign is really cool. Little details like that would interest me when deciding between two bungalows :-)
I dread that "dividing up" time. My Mum has been good about telling people what she wants them to have, but she has step-children close by that can't manage their money-- I'm afraid they will get there first and take anything with value to sell it off. I don't care about value, I want the sentiment.

I completely agree that I'd rather have my belongings in someone's home that appreciates them than the tip or a charity shop. If it were my house, I would hope my daughter made sure she had the things of sentimental value despite how much "more" she may have already taken.
Your brother doesn't read your blog, does he?

imbeingheldhostage - brother doesn't know about my blog, so is unlikely to read it.

Such an emotional time, it's obviously left its mark. I am very conscious that someone might have to sort out my stuff, we have no children, I try to keep my underwear drawer tidy.

I recently came across your blog and have been reading along. I thought I would leave my first comment. I don't know what to say except that I have enjoyed reading. Nice blog. I will keep visiting this blog very often.

I've sorted through more houses than I care to remember! My mother's was the hardest, as she was in a home, and always thought she would go back "when she was better"

But she had sensibly made a list of what my sister and I wanted, also her three grandchildren, so when we came to clear everything there was no argument! It also made it a lot easier.

The really hard stuff was the tins of paint with an inch of hardened paint in them which my Dad had kept "in case they came in useful!"

We hired a mini skip in the end, to get rid of all the stuff in the garage!

Jenny - we don't have children but I am not worrying about that aspect of things at the moment.

Marion - thank you for visiting and also for commenting. I hope that you will visit and comment again. I love to read the comments.

Gilly - I expect that we shall have to have another session when the bungalow sells.

I so agree about belongings going to a place where they'll be cherished.. whether your home, your brother's or almost anyone who truly appreciates them. It was tough to go through this process with my mother's place. I feel for you. Very cool about the Meridian line.

It's a task I dread to be honest, I can see myself sending loads to the charity shops when the time comes.