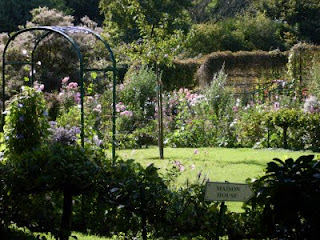 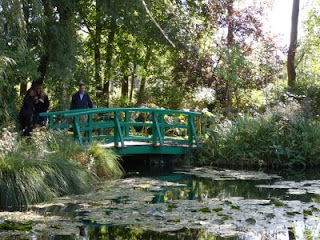 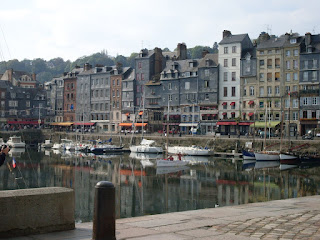 Then in the afternoon we made our way to the ferry terminal, at Caen, making sure that we had time to stop off at the wine warehouse, so that we could stock up on our favourite French wines.
Posted by cheshire wife at 19:18

Oh you are soooo lucky to have gone to see Monet's garden. He is one of my favourite Impressionists painters.
Are you going to model your garden on the same theme? Don't forget the little turquoise bridge!

MM - No, we are not going to try to recreate Monet's garden here in Cheshire. The climate is not warm enough or sunny enough.

You can point your camera just about anywhere in France and get a beautiful picture. Lovely post, makes me yearn to go back.

Monet's garden was past it's best when I saw it but I'm glad I went. The silly thing is, not one picture was taken whilst there.

Isn't Honfleur pretty? If you can lose the tourists (yes I know that I was one too) it would be one of my favourite places in France.

I've not been to Giverny but is everything around named after and devoted to Monet? Pont Aven in Brittany where Gaugin spent a little time is chock full of Gaugin type things.

Valerie - I would have included more photos but most of what I took is disappointing.

FF - Yes, Honfleur is pretty. All of Giverny is devoted to Monet but there is only one street named after him.

I'd love to visit Monet's garden and I'm glad you came back all motivated to press on with your own. You don't have to want the same but you just feel inspired, I think that's a very positive out come. Wish I'd been in the garden today as the weather was lovely, not complaining though as I was out lunching.

What fantastic photos!!!! And evidently Monet's gardens are as beautiful in person as they are in his paintings!!! And the Bayeux Tapestry!!!! I loved it!!! What a fabulous mini-vacation you had!!!! Glad you are home because I love hearing all about your adventures!! ~Janine XO

Have I told you that my daughter and I went to France last year? It was an unbelievable experience. Beautiful photos!!

looks gorgeous.. think i need a trip over there x
hi by the way, i've just discovered you xx

I love seeing pics of others travels...thanks for sharing, they're very glam!
Sandi

CW, how amazingly uncrowded Monet's garden looks. Normally it's packed - it so happens your journey is partly described in my novel Paris Imperfect where the heroine is a tour guide! Lovely photos.

Tracey - thank you for visiting. I hope that you will be back soon.

Susie - I waited for people to move before I took the photos but you are right, Monet's garden was not too crowded.

I must read your book!

I'd love to see Monet's garden! Glad you mananaged to stock up on the wine, too!

I think we'll go to see that garden - it looks beautiful

Enjoyed this post. I went to France a little over ten years ago and long to return. Maybe when these boys of mine get through college.

Hi there. Thanks for signing up to follow my blog. Now, I too get to visit and enjoy your beautiful sights.