Life has once again got in the way of my blog. I started to write a post about two weeks ago, but at the time I was also busy getting ready for the gathering of my husband's family to celebrate his big zero birthday. Trying to clean the cottage from top to bottom in four days ready for the sergeant-major's (mother-in-law's) inspection, then prepare a cordon bleu meal for Saturday lunch. Everything was going to plan. We had just returned from the supermarket and unloaded several bags of shopping from the car, when the phone went at lunch time on the Friday, which was actually my husband's birthday. It was the residential home that mother is in phoning to say that she had collapsed and they had called for an ambulance. Could I go to A&E at the local hospital? My plans to spend the afternoon cooking and preparing for tomorrow's lunch were suddenly up in the air. We did not want to have to cancel the next day's meal as it had taken us four years to persuade my husband's family to visit us up here in Cheshire. Then there was the food. I quickly worked out that most of it could be frozen, otherwise it would have to be binned as we were due to go away for a few days on the Monday. The home kindly sent one of the carers to A&E with my mother and I phoned A&E to enquire about my mother when I estimated that they would have done a preliminary assessment of her. I was advised that she would be having X-rays and tests and to phone back in four hours time. Phew! My bacon was saved and I could spend the afternoon in the kitchen as planned. When I phoned back four hours later Mum had been admitted to the assessment unit. It was then a quick dash to the hospital to visit her. This was all new territory to us and I had heard a lot of complaints about parking at the hospital, so my husband took me with the idea that he would sus out the parking whilst I visited my mother. There are several small car parks in the hospital grounds. Once in the one of the car parks the only way out of it is by purchasing a token from a machine in the hospital. To exit the car park you drive up to the exit barrier, open the driver's door window and put the token in the machine and the barrier opens for you. Fine in my husband's car. Small problem in my car as the driver's door window stopped opening in some time ago and I have not got it fixed as I so rarely need to open it. By Sunday it looked as if Mum would be discharged back to the residential home on Monday so we went away as planned. On the Monday Mum was seen by the consultant who ordered more tests and on the Tuesday I realised that my mobile phone was no longer working. Could anything else go wrong?

Mum is now back in the residential home and I have bought myself a new mobile phone. The driver's door window on my car will be fixed next week. The family gathering for my husband's birthday went well and they were all impressed with the work that we have done on the cottage and the garden since their last visit back in 2004.

So again I am behind with my blog - posting, visiting and everything in general. Husband had planned a week at home from August 7, which is when I last posted. I decided to have some time at home with him and the week has now become a month. If there is anybody out there still reading my blog please take this Spread the Love award with my love. 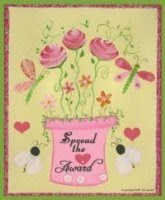 It was kindly given to me by Akelamalu some time ago. I have not obeyed the rules attached to the award but I am hoping that she will understand. Please display it on your blog and pass it onto ten more bloggers.
Posted by cheshire wife at 13:53

My word you did well to 'carry on as planned' after what happend! Well done to you. Good to hear your Mum is Ok now.

No probs on the 'rules' for the award - rules were made to be broken. :)

You have certainly had a bad time of it and I hope things are improving for you all now.
The hospital parking & exit is an awful system (similar here).
I also am useless at giving out awards & if any one is silly enough to give me one, then it will probably never get passed on.

Things certainly go wrong for us all together too. At the time it is easy to think we are the only ones that it happens to but of course, everyone gets their turn. Such is life (sigh).....

Well done! Keeping calm and not panicking is a great characteristic... one I dont have! So am most impressed that you do... glad your mother is back in the residential home, glad that your husband's family all enjoyed your hospitality, and glad that your window and mobile phone are all sorted!! Phew. Am exhausted just writing it down.. imagine doing all that. Oh, you did... xx

Sorry to read of all your problems but glad your mum is out of hospital and that all went well with your visitors. Here in Wales they have abolished car park charges at hospital, so hopefully they will soon do the same in England.

Yep, I think I know that hospital barrier...
Hope all is improving now and that your husband's family appreciated all your efforts...!

Welcome back again CW; I've missed you. Not only do I know that hospital barrier well I also know your car; I too have a driver's window that does not work so if I am carrying a passenger that's ok; I can give the token to them and if not I have the terrible palava of getting out of the car, inserting token and getting back in the car to the annoyance of those waiting behind me. Tesco's car park is not a good venue either. Glad to hear mum and cooking both doing well.

Helen - you are braver than me. I didn't fancy having the barrier come down on my car and I don't drive husband's car so he very nicely took me each time. He can be a saint when he tries.

Life has a habit of taking over best laid plans sometimes, eh? Hope your troubles are decreasing!

I feel quite breathless reading all that! Well done you to keep your head above the water. Hope your mum is ok now.
Hugs to you,
Dot x

Wow, I need a sit down and a nice cup of tea, just trying to recover from reading all this...lol
It never rains but it pours comes to mind, how do you keep your head above water ?
Taking care of your mum is so important, I'm glad to read she is doing Ok. Maybe in the Autumn, things will get to a slower pace..
Take care of yourself !

Phew CW you certainly have had a lot happening. Good on you for remaining very calm under frustrating circumstances. I am very pleased to hear that your Mum is back in her residential home, still it would have been a very worrying situation. It never fails to amaze me about families, your DH family's last visit was 2004! My DH siblings live 20 mins away and his sister has yet to visit, mind you we have only lived here almost 7 years! We did have a visit once from one brother (not his wife). I have thrown the towel in now after 13 years, as they say "you can choose your friends but not your family". Happy to see you back again. Linda

Glad to be hearing from you again, and glad to known that the party went well.

Sorry about your mum. Went through that kind of stuff with both my parents, and know how trying it can be. Only my folks lived about 1,400 miles from where I am. A full day's travel by plane and car.

Linda Gold Coast - I do not know if I am missing something but I can't work out how to get to your blog.

You are really not having an easy time of it are you!! It just seems to be one thing after another!!

I'm glad to hear that your Mum is better and back at the home...you must have got one hell of a fright and I am very impressed that you managed to keep it all together and still cook your meal!!

Hopefully things will improve for you!!

I am still reading; glad all turned out ok in the end and your husbands family survived their trip to darkest Cheshire!

I am still reading; glad all turned out ok in the end and your husbands family survived their trip to darkest Cheshire!

Best laid plans eh?
Never mind, alls well that ends well and nothing too bad happened. sometimes we need some disturbance in our lives to make us reassess what's important.
Love your award and have gratefully accepted it to pass it on.
JJ

Oh CW - I recognise so much in your post. When we lived in Winchester and my dad moved from London into a retirement home nearby he would regularly fall and we'd get a phone call from the warden about us needing to to to A&E and the Royal Hampshire Hosp. He'd also be kept in for tests and there would be much hanging around and worry about the future.

You do have a lot on your plate and I know the worry you are going through. Does your (horrible) brother ever come and see her?

Sorry CW I haven't started my blog as yet! That is one project for the New Year, one of many I might add.

Best laid plans CW - just when you think you have it all organised! Pleased though to read that all went well and that your Mum is OK. Have kept on popping in to see if you had posted anything so it's good to see you. A x

FF - my brother comes up to see Mum when he can arrange a business trip to this area.

I'm still here! If you get the chance, I've tagged you over at mine. No worries if you are too busy (sounds like it!)

Still reading, sorry to hear about your troubles and hoping you continue to cope with all the stress.

sounds like you having the same run of luck that I am having-sigh. Hope it gets better for both of us!

Glad everything has sorted itself out and that the event went well. Best wishes for your Mum.

wow-- that would be enough to send me to the bed declaring that I quit. You deserve the award and a huge pat on the back. Glad your Mom is recovering-- now maybe you can sit back a do a little relaxing?