Back to his green roots

Two weeks ago, yesterday, we set off on our pilgrimage to Ireland. Husband had wanted to make this trip for some time. His maternal grandparents were Irish and he has got hooked on tracing his ancestors. This was our first time on the Holyead to Dublin ferry. When we had booked it, via the Internet, we were given the option of booking seats and we thought that we had better do so, otherwise we might have to stand. I vaguely remembered that one of the perks of booked seats was complimentary refreshments, which I expected to be a drink and a bag of nuts, similar to those offered by airlines. Well, we were amazed to find that the complimentary refreshments were a buffet fit for a king. Why had we bothered to bring our own sandwiches?

It was a fine sunny da 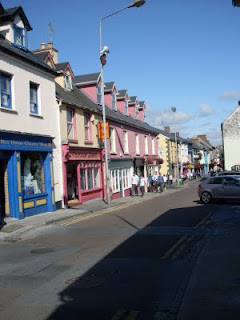 y and we had a smooth crossing to Dublin, followed by a pleasant drive to Ennis in County Clare, where we were to spend three nights. Ennis is the county town of Clare and we had chosen it because the county archive is located in the library there. It is an attractive medieval style market town of narrow winding one way streets on the River Fergus. That evening we ate at Brogans where we opted for the typical Irish dishes of Irish stew for husband and bacon and cabbage for myself. Later we had a nightcap in the hotel's bar and enjoyed the traditional Irish music played on flute, fiddle and accordion. 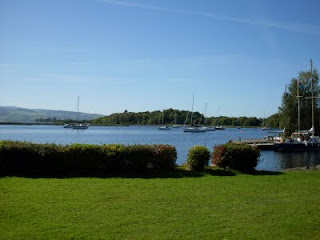 On Sunday morning we headed off to the village of Whitegate, where husband's grandparents hail from. Whilst taking photos he got talking to some locals sitting outside the village bar who gave him contact details of the local historian. From Whitegate we moved on to the nearby small town of Mountshannon, where we found the graves of several of husband's family buried in St. Caimin's churchyard. Then it was down to Mountshannon harbour on Lough Derg, where we came across the local historian who also runs boat trips to Holy Island in Lough Derg. Husband had a good chat to him and came away with a book that the historian had written about the area.

Our next port of call on Monday morning was the archives in the library. Amongst the documents that we looked at was a transcription of the protestant Church of Ireland vestry meetings to approve the church's annual expenses. Included in amongst the cushions, surplices, bells, lead and brushes needed for the church maintenance was 'a popes head for sweeping cobwebs from the ceiling'! 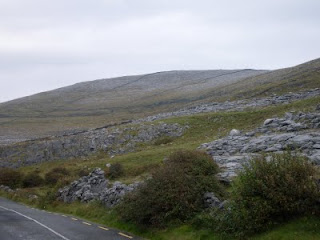 Tuesday morning saw us moving on to Doolin on the north west coast of County Clare. Now we had time for some sight seeing. Driving from Ennis to Doolin, we made a detour to the spa town of Lisdoonvarna, now best known for its' 'Matchmaking Festival' which is held during September. This was in full swing when we visited with posters all over for speed dating and dances. After lunch at Ballyvaughan we drove down the coast road to our hotel at Doolin. This area of County Clare, known as the Burren, is a limestone plateau of about 100 square miles with the appearance of a lunar landscape which varies between vast limestone pavements and areas of lush vegetation. 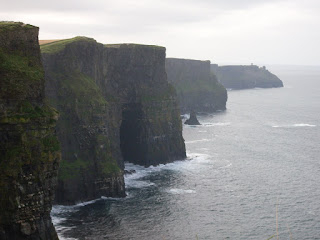 One of the must sees of the area are the Cliffs of Moher, to the south of Doolin which we visited on Wednesday. These 700 ft (200m) high cliffs which stretch for five miles (eight km) are particularly stunning with the waves of the Atlantic crashing against them. We climbed, along with a host of visitors of all nationalities, to the well organised viewing area to take the photo to the right.

The three Aran Isles lie off the coast of Galway Bay. There are boat trips from Doolin to see the islands. We saw one of th 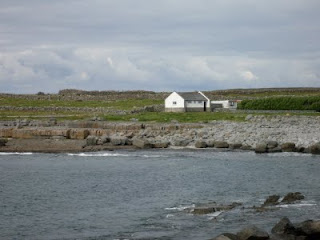 ese boat trips returning and the passengers that got off it were dressed for the Antartic. One of these trips was not an option for us as we had not brought enough warm clothing with us. Perhaps this explains the profusion of shops, in the area, selling Aran Sweaters.

By Thursday husband had found another archive to visit in Corofin. So we briefly stopped off there on the way to Galway. Unfortunately the records that he was interested in were moved to Dublin, for safe keeping, then in 1922 they were destroyed by fire. The drive from Doolin to Galway took us through some breathe taking scenery of wet lands, the greenest grass you have ever seen and grey dry stone walls. Sorry no photos. My little camera would not have done justice to the scenery.

On Friday we started our journey home, driving to Dublin where we stayed over night. The hotels in Ennis and Doolin had been surprisingly good. The hotel in Dublin was a disappointment, but we have learnt from the experience so future visits to Dublin should be better. And I know that there will be future visits, as husband is planning more research into his ancestors.
Posted by cheshire wife at 09:00

I discoverd an Irish ancestor recently, but don't know her maiden name, so my trail has come to a dead end (pardon the pun!)Ireland is certainly a beatiful place...

Great photos and I especially like the dramatic Cliffs of Moher picture.
Glad you had a lovely time. Eire is a great place we went to Kilarney some years ago.

Is it that fascinating programme ' who do you think you are' that has prompted your husband's research? It must be so rewarding to trace one's ancestors - mine are from Russia and many perished in the pogroms, so there is not very much that I could track down.

I do hope he uncovers his full family tree - I would if I could.

How interesting. My great grandmother came from Co Cork at aged 2 during the famine. Unfortunately we don't have any information which would enable us to research that branch of our family tree.

MWM and I had two trips to Dublin and then Cork a few years ago and thoroughly enjoyed them both. :)

Wonderful photos, thanks for sharing them !
One of these days I will make it to Ireland, I also have Irish ancestors they were a tough bunch of people ....

Isn't it nice when you get more than you expected (The buffet?) So often the reverse is true. I'd love to go to Ireland. It looks and sounds wonderful.

The Emerald Isle. Just beautiful photo's. It sounds as though you had a wonderful trip. My sister and I started to trace our family tree, the problem is so many family members had the same christain name, especially the male one, Issac was the worse. We found we became consumed with it so it's been put aside until we retire (he he).

I love Ireland!! Have not been there for years and years but I love the fabulous coastline and rugged landscape!! (Reminds me a lot of Scotland)

Tracing the family tree is a wonderful thing to do!! My Dad has done a lot of work on his side of the family and my Uncle has on the other side...it's really interesting what you find out isn't it!!

Glad you had a lovely time

How smashing for you all. Life can be great at times.

What a wonderful journey!! The photos are beautiful. Ireland is a magical place.

That looks a loely place to look for ancestors! A lot better than boring old north London!! ;)

I've never been to Ireland, you've made me think about it again!

Wow, that looks like a wonderful trip. I love Ireland and the Irish, and have a particular fondness for the north (having friends there). I remember driving from Chester on a Friday evening to catch the night-ferry from Angelsey, too! Is that the way you travelled?

The Dotterel - yes, Holyhead to Dublin, but we did it during the day.

I love Ireland!!! So very beautiful! Your photographs are gorgeous! I especially love your photo of the Cliffs of Moher! What a wonderful trip...thanks for treating us to a taste of the Irish! Hope your mom is doing better! ~Janine XO

You bring back memories of our first visit to Ireland last year - what a wonderful place. And yes, the buffet with smoked salmon etc on the ferry is well worth the few extra pounds.