Back to where it all began

Last weekend we went down south. Recently when we gone down there, we have taken to staying in the hotel where it all began. It being married life. We have tried out a few hotels when we have gone down south to visit relatives and have found The Ship Hotel at Weybridge to suit our needs. We had our wedding reception there and I always think as we turn into the hotel car park that this is the first place that we came to as man and wife. It was not my first choice for my wedding reception but as I had only ten weeks to arrange the wedding I think that we were lucky to find anywhere to have a reception. Why did we do it at such short notice? I was making sure that he couldn't change his mind. No, we had a holiday planned that we decided to make our honeymoon.

Whilst down there we also had to visit my mother-in-law's flat in Surbiton (now sold) to read the gas and electric meters and we managed to squeeze in a quick walk around the Royal Horticultural Society's garden at Wisley. 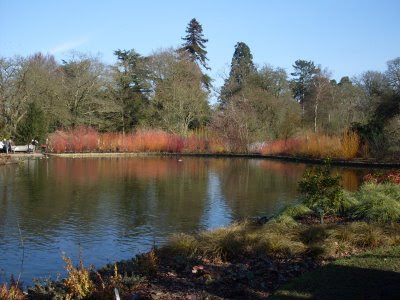 We have been members of the RHS (Royal Horticultural Society) for some years, as the Wisley garden is only a few miles from where we use to live, but when we lived down there there was always something else to do and we rarely visited the garden. Now, whenever we are down there, we attempt to visit the garden. The weather for our walk around Wisley was fine and sunny. There were snowdrops everywhere, quite a few crocuses and some hellebores but surprisingly not one daffodil. However, the dogwood by the lake was spectacular (see above). Some areas of the Wisley garden were cordoned off to visitors for a variety of different reasons. The most notable being as a result of the recent heavy snow which had resulted in damage to the branches of many trees.
Posted by cheshire wife at 22:10

What a beautiful picture. And the way you descibe the snow drops mae me see it in my mind's eye.
Thanks Chesire Wife :)

Am I wrong or was your post wistful and regretful? Do you miss Surrey? Is Cheshire a poor second? (Not a criticism, just an observation.)

Isn't italways the case that we ignore what is on our doorsteps and yet visit them like mad when we visit. Why do we do that?

That's a beautiful photo.
I think that it is quite nostalgic to go back to places where you once lived or visited. There are so many memories.

When we lived in Surrey (Ashtead) we often used to visit Wisley. Took my driving test in Surbiton - if you can drive there you can drive anywhere I think!

I love Wisley. My sister lives in Surrey, and when I go to visit her, we always go there. The new glasshouse is spectacular!

Helen - I did not intend it to be wistful and regretful. I intended it to be a post about our weekend, but I did live in the London/Surrey area for 25 years whereas we have only lived in Cheshire for five and a half years. There are a lot of memories down south.

Lindsey- we used to live in Leatherhead when we were first married & husband played squash at Ashtead Squash Club.

How is it going with finding your mum a residential home? Or was it your ma-in-law? Or was it both?

Lovely shot of the RHS gardens.

Another placee I haven't been yet. That's sad about the tree branches.

What a beautiful photo. I'd love to go to Wisley. one day...!

FF - it's Mum. MIL has all her marbles but has other health problems. Watch this space for a progress report.

Wisley looks lovely. If I remember correctly, there are some fine gardens in Cheshire, too!

So many love to see it snow but it really does leave a lot of mess and in some cases, devastation. Lovely picture.

How lovely that you keep going back to where you started your married life. :)

The photograph of the gardens is just beautiful.

The picture is lovely and I can see what you mean about the dogwood. Sounds like a good day with your mother as well. A x