The way we are

Spring is in the air but, I am not entirely sure that Winter is done with us. Some days have been pleasant and sunny, while others have been cloudy and windy. However, we have managed to spend some welcome time in the garden. 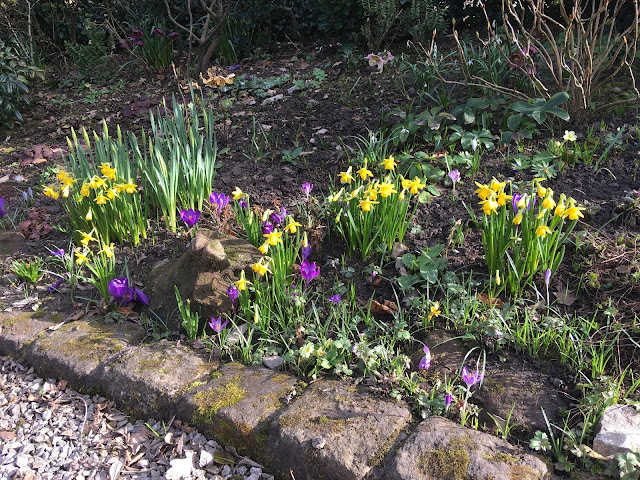 Today is a year since England went into its first lockdown and it has being marked by a National Day of Reflection. We are now starting to ease our way out of our third lockdown. Schools went back two weeks ago and we have a timetable for the opening of  hairdressers, non-essential shops, gyms and hospitality etc. Scotland, Wales and Northern Ireland all have their own plans, which are similar but different to England’s plans. During the coronavirus pandemic the three devolved governments have gone out of their way to be awkward and do things differently to England. However, their tactics have not given them a better outcome from the pandemic, with regard to infection rates and the number of deaths. My feelings are that it would have been better if the UK’s response to the pandemic had been managed from London. Then the whole country would have moved in and out of lockdown at the same time. Northern Ireland have managed things in the only the way that the Irish would - you probably need to be British to understand that sentiment. Scotland’s response has been chaotic and difficult to fathom with Nicola Sturgeon showing her true colours. While Wales have flipped in and out of lockdown as often as most people change their socks. Why am I bothered by this? - because we  live near Chester, two miles from the border with Wales and whatever the Welsh do has an impact on us. People from Chester work in Wales and vice versa. So if infection rates go up over the border, they will probably also go up over here. Last week Wales eased its lockdown ahead of Mother’s Day allowing families to meet up. Something we were not allowed to do here in England. In two to three weeks time, Wales will probably have a spike in infections resulting from Mother’s Day socialising. I see that Anglesey already has seen increased infection rates. I can't wait for the hairdressers to open, as I just want to get my hair cut.

Coronavirus vaccinations continue to be a hot topic of conversation with the shenangihans in the European Union causing concern not only in Europe, but worldwide. Mainland Europe is currently experiencing a third wave of infections leading to more lockdowns and restrictions. All exacerbated by the slow rollout of the vaccine there. Delayed supplies of the vaccines and worries about side effects being the most recent excuses to poke a political finger at the UK. This carton from The Times of Wednesday 17 March 2021 says it all. 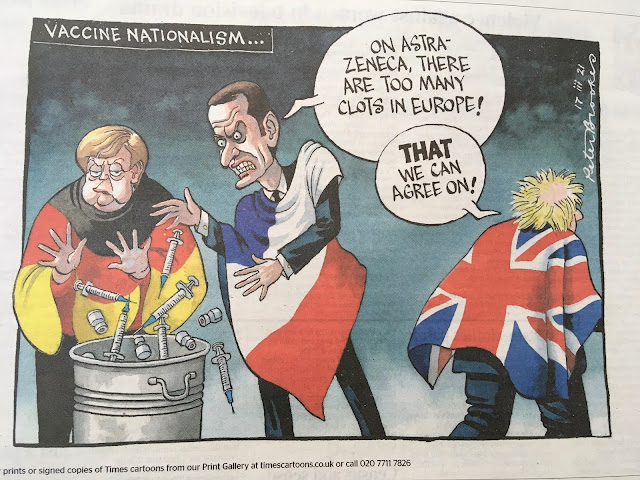 The problem is the contract that the EU have with AstraZeneca. They negotiated on price which has put them at the back of the queue whereas the UK negotiated on vaccine availability, putting them at the front of the queue. The Europeans clearly do not understand the concept of queueing. We all know about the German towels on the sunbed.

Meanwhile back in the UK, the hiatus after the murder of Sarah Everard seems to have died down. I am not saying that her death was not a tragedy, but I seem to be missing something. At the time of her murder the whole country was in lockdown and we are still not allowed to meet anyone indoors. We can only meet one person outdoors, so what was she doing visiting a friend?  When I was around her age I too lived in London and probably walked home alone late at night, but I lived in a different area of London. I would never have walked around Brixton alone, even in daylight. The vigil on the Saturday evening broke the coronavirus regulations. The police were right to break up the crowds and despite all the fuss about their tactics, only four people were arrested.

The other issue still rumbling on is the Meg and Haz side show. Here in the UK people are not that interested. We are currently lockdown in a pandemic and have more important things to think about than two self centred and privileged individuals complaining about how badly life has treated them. After all, we lived through the events and saw then reported in the media at the time. I watched the interview, if you could call it an interview, so that I could make up my own mind about what they had to say. It was more like a conversation with Meghan steering it in the direction that she wanted it to go. It had taken them 15 months to write the script and learn their lines. Everything was twisted to fit the distorted narrative that they want to peddle. If Meghan had ever read a Jane Austen novel she would have understood the lot of a younger son, but she realised too late that she had signed up for a bit part rather than the starring role. The media is awash with stories of Meghan's erratic behaviour - they can't all be wrong. Every time I see her petulant face I see Wallis Simpson - that other American divorcee who caused the last constitutional crisis in 1936. One can only imagine how unbelievably let down and betrayed Prince William must feel. These tell all interviews rarely end well. They are probably already, regretting that they did it.

I agree with your comments about borders. We live near a county boundary and London truly messed up with the tier system which resulted in hordes from a higher tier unlawfully coming into our low virus district to participate in hospitality and non-essential shopping bringing the virus with them. Seems strange that it is taking politicians so long to realise viruses don’t recognise administrative boundaries.

It all seems such a mess, jumping from one regulation to another. Costa Rica had onemajor lockdown which ruined a lot of small businesses but s now admitting tourists from anywhere without the need for tests of vaccines and, a few months ater, has had no great problems.