Here in the UK we are lockdown once again, so I thought that I would look back on some of the events of the last twelve months.

Well, what a year it was! I am not sure that hindsight is of much use now. Foresight would have been more useful a year ago, but if any of us had seen in a crystal ball what 2020 had to offer,  how many of us would even have got out of bed last January?

About a year ago we set off for Cape Town. So as the pandemic kicked off in China we were reliant on the internet for news as we travelled around South Africa. I am sure that everywhere that we stayed had a television in the bedroom but we do not usually watch television when we are away from home. In fact we do not even watch much television when we are at home. We were aware of the situation in China but had no idea of what it would escalate into. No one did. Initially the weather was good and we enjoyed the blue skies and sunshine of the Western Cape. We didn't have a care in the world as we enjoyed a day's wine tour around Franschhoek with lunch at Richard Branson's Mont Rochelle vineyard, where the scenery is absolutely stunning. 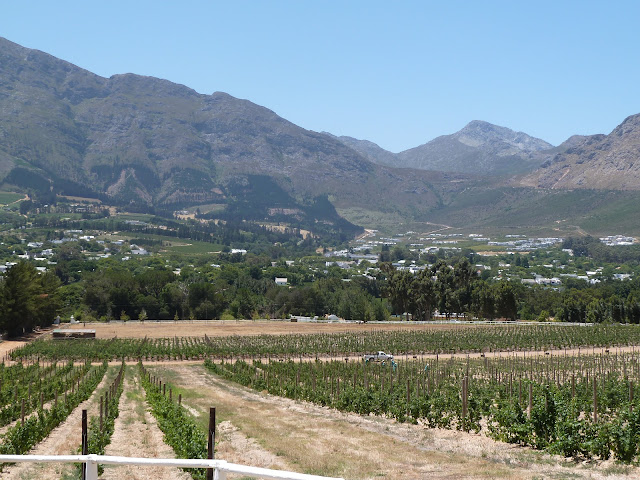 The good weather was not to last. During our drive along the Garden Route the weather gods decided to end South Africa's drought with spectacular thunderstorms, torrential rain and power cuts. Maybe we should have seen this as a harbinger of what was to come. After Port Elizabeth we flew to the Victoria Falls for a couple of days. There the weather was dry. At Johannesburg airport we saw a group of Chinese people being taken to one side.  I think by now the whole world saw all Chinese as carriers of this virus which had infected so many people in China. The last six nights of our holiday were spent in the Seychelles, where every day we had yet more thunderstorms and rain. After nearly four weeks away we were glad to return home on February 1, to a UK that had just left the EU although there were no obvious changes at Manchester airport. We had managed to avoid delayed flights and quarantine and no one seemed to be bothered about where we had been, but then Big Brother Emirates knew exactly when and where we were flying to and from. I just hoped that we did not get burgled.

Back in the UK it was cold, grey and wet. We seemed to have brought the South African rain back with us. From the edge of our seats, we watched the television news as coronavirus spread west from China. Here life was normal. We could socialise, shop for non essential items and go to the hairdresser. But for how long? Countries in Europe were locking down.  Horrified we watched as hospitals in Italy, Spain and France were overwhelmed by cases of the virus. It was only a matter of time before coronavirus reached our shores. We are an island. Someone would kindly import it for us even though the government set up isolation centres for travellers returning to the UK from hot spots, in an attempt to contain the virus. By the third week in March the battle was lost and the UK was also locked down as the number of coronavirus infections started to climb.

At first lockdown was a bit of a novelty. There was not much traffic on the roads, people were polite and kept their distance and restricted numbers in the supermarket made shopping a less unpleasant experience and the weather played its' part by being dry and sunny. This meant that we could spend time in the garden in addition to our allowed essential exercise of a walk around the village. Away from our Cheshire bubble things were grim, as the number of infections and deaths continued to rise. And so life went on. Holidays which had been booked and looked forward to for some time were cancelled and re-arranged. We naively thought that it would all be over in a few months and that life would return to normal. Then when we thought that things were improving as the infection rate dropped, we were instructed to wear face masks in shops, public transport and enclosed spaces. I am not a fan of mask wearing, but maybe the powers that be were right to insist on us wearing them. Everyday different scientists would pop up advising on what we should and shouldn't be doing. All seemed to be experts in their fields. Who knew that we had so many professors?

Over the summer the lockdown was relaxed, as the number of coronavirus infections fell and life became a bit more normal. We were even allowed to have a foreign holiday and we were fortunate enough to manage a week away on the Greek island of Crete at the beginning of September. But there were still rules to be abided by and that was the problem. Many did not follow the rules. In particular the young, who in general get away with an asymptomatic or mild dose of the virus. We were lucky enough to return from Crete just hours before England brought in quarantine rules for travellers returning from Crete, which had been necessitated by young people returning from the island with the virus, having partied the night away while on holiday. By mid September the second wave of the pandemic was starting in the UK as infection rate began to go up again and some parts of the country were under local restrictions. In October a tiered system of restrictions was brought in covering all of England. Scotland, Wales and Northern Ireland had their own restrictions set out by their devolved governments. My husband and I had been shocked to see on the TV, places where people were partying in the street, hugging and kissing one another against all the rules. And the authorities were letting them get away with it. Infection rates continued to climb resulting in a one month lockdown during Novmber, in the hope of saving Christmas. It did bring the numbers down, only for them to go up again in December.

In the run up to Christmas the restrictions were tightened as the number of infections rose, but there were still plans to relax the rules for five days over the Christmas bank holiday. Then the weekend before Christmas the bombshell was dropped that a new more infectious variant had been identified and was spreading rapidly around London and the south east of England. These areas were effectively lockdown overnight leaving Christmas plans in ruins. As the news of this new variant spread countries in Europe and around the world banned travellers from the leper colony that was the UK. Within a day the Frog President Macron, while suffering from coronavirus himself, took the knee jerk decision to close the French border with the UK, leaving hundreds of EU nationals stranded in England. Most of those stranded were not coronavirus carrying Brits trying to cross the English Channel to France, but eastern European lorry drivers wanting to get home for Christmas. 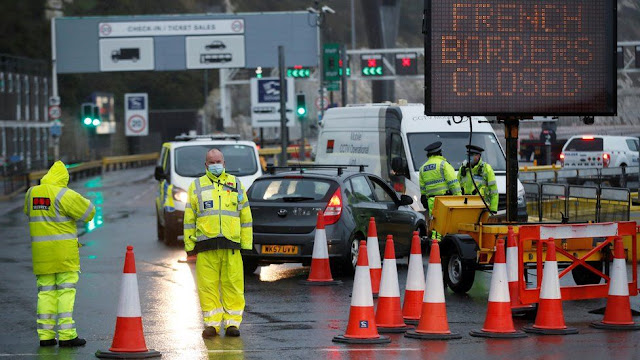 This caused chaos around the channel ports in Kent as thousands of lorries, trying to cross the Channel, ended up blocking the roads. Some lorry drivers ended up spending Christmas in their cab. The French  will not be forgiven for their stupid actions and will live to regret them. This household for one will no longer buy anything French including wine. Other countries produce equally drinkable wine.

Within days several other countries admitted that the new variant, termed the UK or Kent variant, was already present in their country and had been present before the UK announcement. When you take into account the fact the second wave of the coronavirus pandemic started in Europe weeks ahead of the second wave in the UK, then it is quite likely that the new variant actually originated in Europe. The UK simply identified it and alerted the world, as we lead the world in genome testing.

All year the Brexit talks had continued between the UK and the EU, finally coming to an agreement just before Christmas. In the US it had been a presidential election year with the Democrat candidate Joe Biden defeating the Republican incumbent president Donald Trump. But everything, in this strangest of years, was overshadowed by the coronavirus pandemic and I am wondering how many hours we have spent watching government briefings about how the pandemic has progressed and changes to the lockdown restrictions. I am also wondering how many times husband and I have walked around our village for exercise!

When we lived in France we noted a quite evident hatred for Britain among what I suppose were the 'elite'. Not among ordinary people, though. You could be discussing something and, rather than being able to disagree these people would start to sneer...the British were just pragmatic, did not work on reason, etc...culminating, of course, in that we had burned Joan of Arc! The reply was that of Wellington....Napoleon's plans were rigid, whereas his were supple, like a horse's harness...break one piece and it was simple to replace it. The clincher was to admit to having burned Joan, but reminding them who sold her to us....
Macron's closure of the ports had nothing to do with Covid and evrything to do with Brexit...just like his snail tactics at the ports currently.
I do hope that this coming year will see some sense, will see our economy recover and see children back to school...and that you two get a holiday!

What I don't think a lot of people noticed in Britain was that the Brexit bill that was rushed through, removed all kinds of protections, like protecting the NHS and protection against environmental destruction and unfair competition. Today I just heard from Compassion in World farming, which I donate to, that it has undone much of their work of the last 40 years by removing the presumption that animals are sentient and have feelings. I haven't looked into that claim yet. Personally I think we have been so punch drunk with everything that has happened that most people have stopped noticing things unless they are screamed at about them. I certainly feel that, do you?