In the nick of time

Do not adjust your computer. You have seen this photograph before and as with other things right now we are back to where we were a few months ago. We have seen this view a bit too much recently. 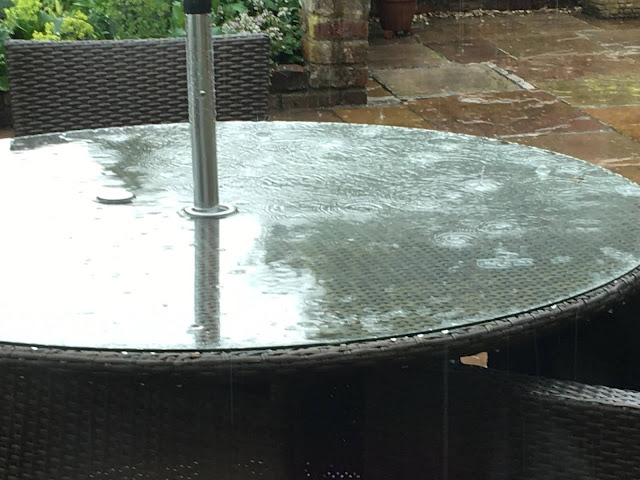 When we have not had to look at the rain pounding our garden furniture we have been working in the garden. I had hoped that that the circumstances this year would have given us the opportunity to get on top of the garden, but the weather has once again foiled our attempts. Everything looked so promising in the Spring when we had such good weather. We should have known that it was too good to last. Anyway right now there is not much else to do. Lockdown 2 has seen to that.

I know that I have been absent,  because of nothing much to write about, but I suppose what is worth writing about is our week away. We have been back a couple of months now. However, I imagine that a week away in September will turn out to be the highlight of our Summer. Back in June we were hoping to go to Corfu in September. As the Summer progressed we had second thoughts about going to Corfu. This was to be our first visit to Corfu and we decided that we would be better going to somewhere that we were familiar with. Eventually we managed to get through to Jet2 who allowed us to change not only our destination but also our departure date. So on September 1 we set off to one of our favourite destinations - Agios Nikolaos in Crete, which meant that we did get to see this lovely view - without the cruise ship. 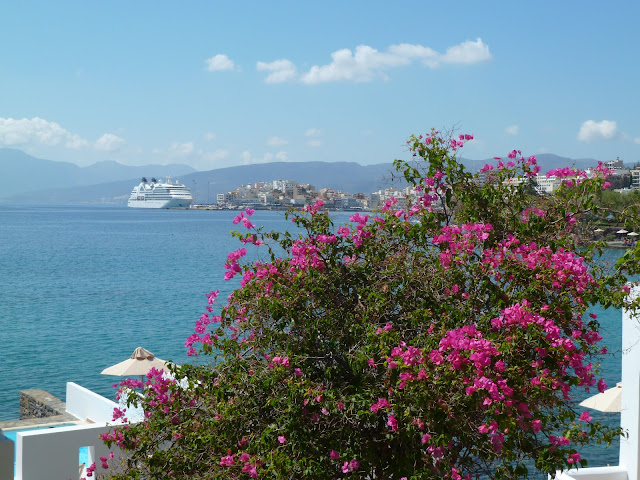 As the holiday approached there was always the risk that the UK government would decide that Crete/Greece's coronavirus infection rate was too high and we would not be allowed to go, which meant that most of our preparations were left until the last minute. To our relief  the week before we went Crete was on the approved list of countries and we were able to go. Our flight to Heraklion was at 8.55 am. We were at a very quiet Manchester airport by 7.00 am, wearing face masks of course. During our journey we were allowed to remove the mask a couple of times to eat and drink. By the time we reached our hotel in Agios Nikolaos we had been wearing the wretched thing for about nine and a half hours - quite an endurance test. At last we could remove it. The hotel reception took our temperatures with a forehead gun then left us to our own devices. We had chosen this hotel because we had been before and felt that we would be safe there. The accommodation is mainly in bungalows spread around its extensive grounds. The dining room has a roof but no windows so is essentially outside, as is the bar. There are plenty of sunbeds and umbrelllas around the hotel grounds and it has a large swimming pool which we have never seen more than about six guests in at any time. Then there is a small beach and access to the sea from sunbathing jetties. In our bungalow was a pack containing a small hand sanitiser, wet wipes, two diposable face masks and a leaflet about the Greek coronavirus restrictions.

After a quick unpack and freshen up it was time to go out for our evening meal. It was good to see that the small supermarket across the road from the hotel was still in business. However, just down the road the nearest taverna to the hotel was closed and for sale. It was not a place that we used much. We had decided to walk down to the lake. To our relief most places were still there and open for business, but the resort was very quiet. We headed to one of our favourite tavernas by the lake run by twin brothers. They were pleased to see us - business was very slow. Their season had not started until July - normally it would start late April. That night, while we ate in their taverna, we were about the only customers they had.

Our lazy week in the sun went all too quickly. Most days we walked down to the lake for lunch or our evening meal. We did a bit of shopping, lay in the sun, read a book and swam. There was nothing else to do. There were no trips or excursions. The boats used for day trips were moored between our hotel and the next one. We enjoyed ourselves. And I have to say that we preferred a quiet resort to the usual busy one. We only wore face masks for our brief forays into shops. The hotel did not disappoint and we shall be going back next year.

To our relief while we were away Crete remained on the UK's approved list of countries that we could travel to without having to quarantine on our return to the UK. However, on our last day, September 7, the UK government announced that from 4 am on September 9 travellers entering the UK from Crete and some other Greek islands would have to quarantine for 14 days. How lucky were we? We were due to fly home on September 8. That evening as we went out for our last supper the waiters in the tavernas had heard about the UK quarantine rules, but I am sure that they did not realised that it would mean that holiday makers from the UK would not come.

Although we would have liked to have stayed for longer, we were pleased to be going home.  Our taxi got us to the airport in good time and from the departure lounge we watched our plane land. Then saw the not very many new arrivals as they left the plane.

Would we have come if our holiday had been a week later? We don't know.

Our return flight was full unlike the flight out, which had been about two thirds full. We landed back in a wet Manchester at 6.20 pm on September 8 - nine hours to spare. By the following day Jet2 had suspended holidays to Crete.

It had been good to get away, even if only for one week. We had had seven days of blue skies and sun - something which we had not seen much of in Cheshire during the Summer and I had not had to cook for a week.

Not to cook for a week...bliss!