Up, up and away

Shortly after my last posting our life took an unexpected turn. Hence my absence once again. For a change it was good news that turned our lives upside down. Husband's nephew, who has been working in San Francisco for the last six and a half years, announced that he was to marry his American girlfriend at the end of the first week in August. The wedding ceremony was to take place on the beach in Monterey, two hours south of San Francisco. And of couse we were invited.  This rather threw us into a tail spin. We are going away in September for twelve days and that had been booked for some time. Then we had planned to have a few days in France in October. My initial thought was that we were spending a lot of time away. As well as being nehew's uncle, husband is also his godfather and he wanted to go.  After about a week of researching flight schedules and ticket prices, we bit the bullet and booked ourselves a return flight to San Francisco. Then we had to find somewhere to stay. We decided on two nights in San Francisco, which would give us a day to sight see before we hired a car to drive down to Monterey.

In many ways that was the easy bit. Next we had to decide what to wear. The UK's cool, damp climate is not conducive to beach weddings. This was something new to us. The dress code was smart casual. It was easy enough to sort out husband, but more difficult for me. Initially I purchased a dress from a well known online retailer only to find that my sister-in-law (SIL), who is the groom's mother, had also bought the same dress and was intending to wear it for the wedding. Eventually I settled on another dress from the same online retailer, which suited me a lot better and I would never otherwise have bought.

So wardrobe sorted out and suitcase packed, we were off to Manchester Airport. The motorway was clear and for once we arrived at the airport early. Once we had checked in for our flight and were through security we headed for duty free. Then had a leisurely coffee before setting off for our departure gate, where we boarded a bus to take us to the aircraft. Whilst on the bus we looked at our boarding passes for the first time and noticed that we had not been allocated the seats that we had booked. In fact we did not even seem to be in adjacent seats. Husband, ever the gentleman, boarded the plane in front of me and explained to the waiting stewardess that we had not been allocated the seats that we had booked. She looked at our boarding passes and told us that there was not a problem, if we just turned left we would find our seats. So we did as instructed and it took us a minute or two to realise that we had been upgraded to Business Class. Before we were settled into our seats we were offered a glass of champagne and for the next two hours or so the alcohol flowed freely, as we were served a very decent  meal on proper china plates. Later into the flight we were served afternoon tea, again with china plates and individual cake stands. All good things come to an end and after about nine hours in the air we landed at Las Vegas where we changed planes for a flight to San Francisco.

Husband's nephew and his American fiancee, who we had not met, picked us up at the airport and took us to our hotel. Because of the time difference, by now we had been up for almost 24 hours. Hardly ideal circumstances for a soon to be new member of the family to be meeting us for the first time.

The next day was our one day for sight seeing in San Francisco. In the morning we had a good walk around through Chinatown and down Lombard Street - San Francisco's famous crooked street and onto to Fisherman's Wharf which was heaving with people. 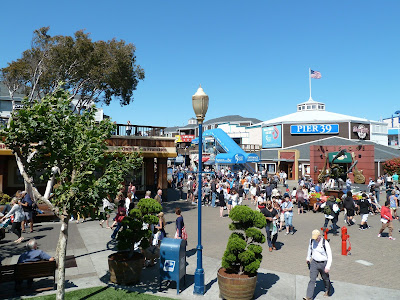 From there we could see the island of Alcatraz sitting out in San Francisco Bay. 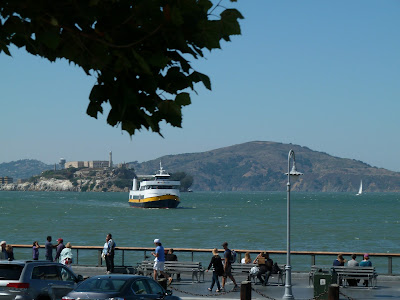 In the afternoon we rested our legs and did an open top bus tour, which was an opportunity for taking photographs while sitting down. We got onto the bus outside Macy's in Union Square. 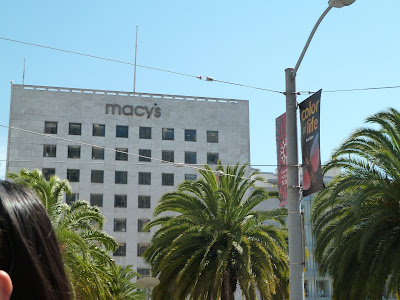 It took us around most of the central points of interest, then we headed out to the Golden Gate Bridge 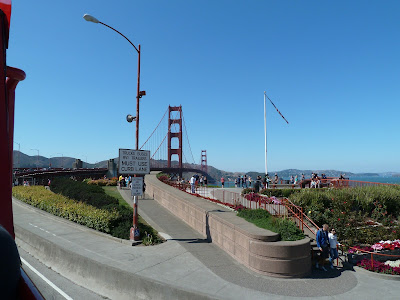 before turning around and heading back into the centre again. 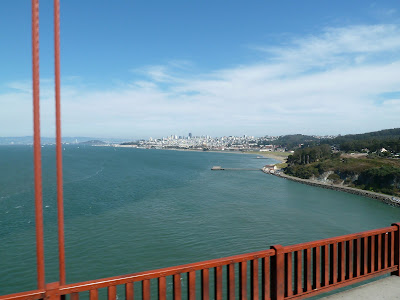 It was not as easy as I thought to take photos from a moving bus and I kept getting the tour guide' s head in my  photos.

The following day we collected the hire car and drove down the Pacific Coast Highway or Highway 1 to Monterey.  We had been told that the coastal scenery along the route was stunning, but the day was grey and overcast and it looked fairly ordinary. It was late afternoon by the time that two weary travellers arrived at our hotel. Having completed the check in formalities, we were handed the keys to our room and told that we had been given a room upgrade. All rooms at this hotel were the same size. However, we were on a higher floor with an ocean view

rather than a harbour view. In a few days time we were to benefit from this upgrade. That evening there was an almighty thunderstorm, which rumbled on for several hours without much rain, but we had a good view of the sheet lightening from our balcony.

After the thunderstorm, the day of the wedding dawned cool, grey and cloudy. It did not look good, but by the time that we needed to leave the hotel, the sky was beginning to clear. We had a brisk 30 minute walk to the site of the wedding, known locally as Lovers' Point, which was to be held on a grassy area under a cypress tree, 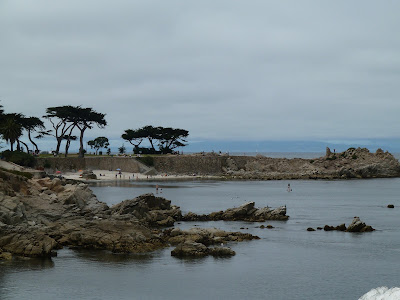 in the middle of the photograph, next to the beach. As the bride and groom arrived, the sun came out. The bride looked stunning and the groom looked as smart as I have seen him for a long time. The wedding ceremony was brief and after photographs we made our way to the Monterey Plaza Hotel for the reception.

The day after the wedding we joined the bride and groom, family and friends for a picnic and ramble in Point Lobos State Reserve, a nature park with a dramatic rocky coastline 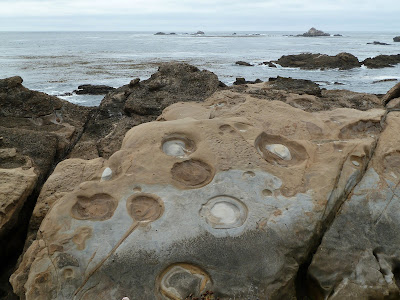 where we saw these sea lions relaxing on the rocks and caught sight of a whale. 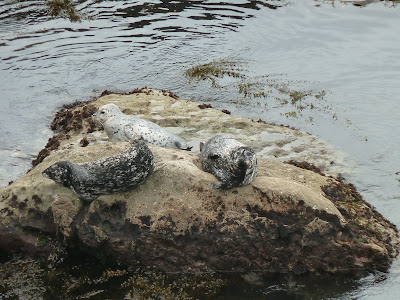 Sadly it was another grey and dismal day without many photo opportunities.

The happy couple returned to San Francisco the following day. Honeymoon to be sometime next year. SIL and family also returned to San Francisco to fly back home to the UK. This left us with a few days to ourselves, which gave us the chance the explore Monterey and to nearby Carmel, where Clint Eastwood was once the mayor. Carmel is fairly small with a beautiful white sandy beach 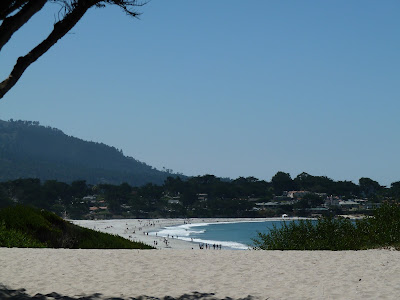 and reputedly some nice shops, but it was so busy that we were unable to find anywhere to park the car and ended up back in Monterey.

Many of the visitors to Monterey are there to visit the Monterey Bay Aquarium. We, maybe foolishly, gave it a miss. There was always a queue outside and the admission charge for an adult is 40 US dollars, which is about £30. There is plenty if wildlife to be seen around Monterey for free. The rocks near Monterey harbour are usually occupied by these black Sooty Shearwaters and Brown Pelicans 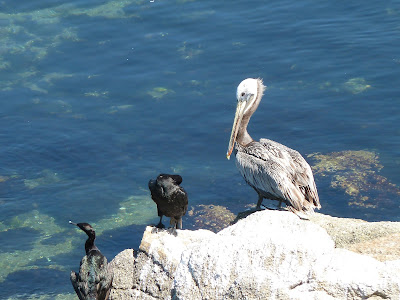 and of course the ever present sea gulls. Early one evening, about 150 metres from the balcony of our room, a whale put on a show for us. It was just too far out to photograph, but I had a good view of it through the binoculars provided by the hotel.

There is more to Monterey than wildlife. California's Latin heritage can be seen in downtown or Old Monterey where the architecture has a Spanish and Mexican feel. Amongst the old buildings in that part of town is Stevenson House - below 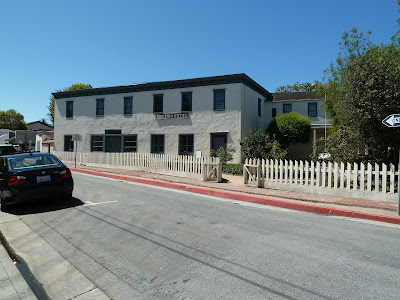 where Robert Louis Stevenson stayed, in 1879, while he wooed his wife to be Fanny Osbourne and researched his novel Treasure Island. Monterey's literary heritage does not end there. The author John Steinbeck was born in the nearby town of Salinas. 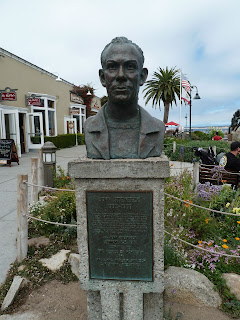 His novel Cannery Row immortalised the sardine canning business that was Monterey's main source of income for the first half of the last century. 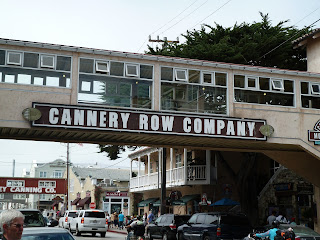 Now the Monterey Bay Aquarium is built on the site of the city's largest sardine factory. Then there are the car auctions, which seem to be big business. Amongst all the shiny sports cars and old jalopies I spotted this well maintained old Nash waiting for a new owner. 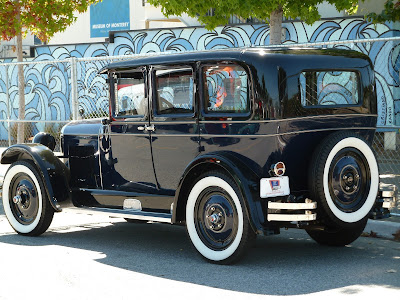 Our California dream came to an end and it was time to return home on what was to be the hottest, sunniest day of our holiday.  My photographs show that we had had some grey and disappointing weather, although very little rain. This time we took Highway 101 to San Francisco, rather than the coast road as it is a faster road. The grass at the roadside was orange/brown with patches of black where there had been small fires. California is desperately short of water. Some restaurants would only serve water if you requested it. The fires that were reported in the media happened after we had left, when the weather turned hotter.

The incoming flight to San Francisco was late arriving, which meant that we were late leaving for the flight back to London Heathrow. We arrived back late into a very wet, cold and miserable Heathrow airport after some especially bad weather over the south of the UK. Many flights had been affected and Heathrow was struggling to cope with the thousands of people who had experienced delays. We, along with several hundred other people, needed to transfer from one terminal to another to catch our flight up to Manchester. Needless to say we missed it, but were automatically transferred to the next flight by British Airways and given complimentary free access to one of their executive lounges - somewhere that I had not visited before.  The lounge was busy as so many passengers were experiencing delays, but there was plenty of space, power points for laptops etc, TV screens showing something other than a baseball match, newspapers and a self service buffet. It was almost worth the delay.

Retirement seems to have well and truly kicked in, as I doubt that we would have been able to drop everything and fly off to a wedding in California if husband had been working. As I said earlier next week we go away again,on a planned trip. All this gallivanting around. When did we find the time to go to work?
Posted by cheshire wife at 08:30

I know the feeling!

Wow! You're getting some really lucky and lovely breaks!
Enjoy.......
Maggie x

Well worth the journey....it sounds superb.

Only just read this, if i'd have known my little sis up in Napa could have shown you around wine country...maybe next time.