The road to nowhere

A brown and muddy lane such as the one outside our cottage does not have quite the same ring to it as the yellow brick road. It does not lead to Oz and there is no rainbow anywhere around. We have the dairy farmer, turned arable farmer and the wet weather to thank for the state of it. Turn left out of our drive and the lane will take you into one of the farmer’s fields where he has been growing vegetables. Turn right and right again and you will come to one of the main roads out of the village. 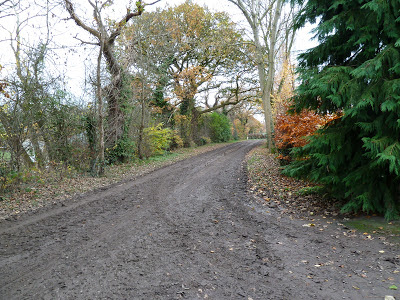 A team of men have been harvesting the crops in the field, which we were told would be potatoes and leeks, on and off since September. One of the fields can be accessed from the main road. So apart from the mud on the road when that field was harvested it did not interfere with our lives. But for several weeks now husband has been washing our cars every weekend only for them to get covered in mud within 24 hours. However, for the last two weeks the crop that was grown in the field at the top of our lane has been harvested. It is a long hard day for the team of predominantly Polish workmen. Husband has seen them arriving for work as he leaves home at around 6.45 am and I have seen them leaving at around 4.15 pm. Tractors and heavy farm machinery have been trundling and at times thundering up and down the lane from as early as 7.00 am until well after dark. There are no street lights around here and it must be pitch black in the field. And it is not just a Monday to Friday operation. They have been working weekends too. One evening I came home to find a farm vehicle of some description in the lane lit up with about six headlamp type lights. It was like the scene from ET. Thankfully they have now finished and life has returned to normal. If it is ever normal here, but not before a bit of drama.


A week ago I heard something heavy on the main road around mid-night. The following morning husband found his route along the road was blocked by wide farm machinery so had to make a detour around the village before he could effectively set off for work, making him late. Access to  our village is via two main roads one to the east of the village and another to the west. Last week the western road was closed going south for road works, which were scheduled to take two weeks. Then another sign went up in the village announcing that the access road to the eastern road was going to be closed this week for road works, leaving only one route in and out or the village. A concerned resident contacted the powers that be to point out that  delays caused by these road works could be a problem if emergency vehicles needed access to the village. Suddenly the two week closure became one week and the one week closure became one day!
Posted by cheshire wife at 22:00

Seems that wherever you are, country or city, road works can hold things up.
We have had Water works digging up miles of main roads and side roads since September now and it is beyond a joke.
Glad your inconvenience didn't last as long as predicted.
Maggie X

Which just goes to proved they CAN do the job in less time!

Amazing how that schedule corkscrewed!

A farming neighbour in France was always careful to clear mud from the road every day....except for just in front of another farmer's access.
We imagined there had been some disagreement....

Maggie - there are road works all over Chester too.

fly - the farmer has said that he will clean up the lane, whatever that might mean.

There are road problems everywhere – because of road work it took my daughter and family an extra 1 and ½ hour to drive from Nashville to Atlanta at Thanksgiving last week. When I go to visit them in Nashville I avoid the freeway and drive through the Chattahoochee National Forest, it is prettier anyway. I saw on the tele that there was a lot of rain in England – I hope it was not in your area.

Better the road to nowhere than the train to Morrow. (Which doesn't mean much if you don't know the song.) Happy motoring, nonetheless.

Nice to know that a phone call was effective. That's rare around here.

Vagabonde - not too much rain here thankfully.

Rob - I know what you mean.