Off with her head 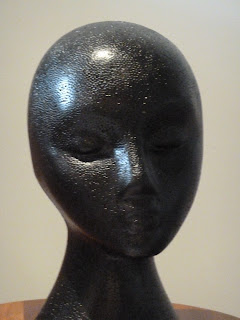 Ironically last week I was lent this mannequin’s head, by the flower arranging teacher, for this week’s flower arranging assignment. And I know that I have been absent again, for a goodish reason. Firstly, I had never done anything like a floral hat and I had to give some thought to what I was going to do. For a run of the mill arrangement I need to chose a container from my cupboard. Then buy some flowers and cut some foliage from the garden. That does not take long. However, a hat was going to be quite a challenge. It would be as much art, as flower arranging. By Thursday I had had an idea or two about what I might create, when fate or something stepped in, in the form of a bug which as it turned out  was all in my head. Sore throat, woolly head, blocked nose and soon a tickly cough. I was fine from the neck down. If someone had wanted to try out their guillotine on me I probably would have let them. Consequently their seemed to be a certain amount of irony in the mannequin’s head sitting in our utility room. I hope that I have had the worst of the bug and I have returned the mannequin's head. She never did get her hat.
Posted by cheshire wife at 21:45

The connection reminds me of a pub (that has been shut now for over two years) called the Headless Woman near Chester.

One of the local estate agents is trying to auction it for re-development. They haven't actually sold it yet (after some 3 months).

Hope you're feeling better. I would have liked to have seen what you came up with for the floral hat.

There you are, see - every cloud...
Hope you will be properly better soon though. It seems a bit extreme to pick up such a bug in order to evade your flower arranging homework. ;)

I do hope you're feeling better now...the hat project intrigues me!

Oh that was disappointing.
Hope you feel heaps better now.
I think if I had to make an elegant hat to fit the mannequin's head, I would definitely get a headache! Not going through a very imaginative phase at present.
Maggie X

Oh dear! I expect you felt like swopping heads with her :) Making a hat seems an incredibly difficult thing to do and I have no idea how i would ever even start.

I've been trying to get ahead for years; I'm glad you've got one, but am sorry you had to return it.

As for hat-making, I have no skills in millinery, whether using fabric or flowers.

I would love several heads to house my hats...but not if they are going to give me a funny bug...though this bug sounds anything but funny!
hope you remain bug free!
Sandi

Hello:
Still, the hatless head looks very elegant. Such a pity that you could not hold on to it as we are certain that it would make an excellent talking point in any room in the house. As for the floral hat, well, Easter is a way off and then there will be another chance to create your horticultural bonnet!

Hope that you are feeling better now.