If we had a flag pole, today the flag would be flying because I am celebrating. Husband left for work this morning for the first time since last August, when he took some time off work to have a short holiday and have cataracts removed. I had expected that he would be back working by the end of October. Our lives have changed unbelievably in the last six months. As we drove home from our respective workplaces on August 31 last year, neither of us could have envisaged the changes that were about to take place on our lives. By Christmas both of our mothers had died and I was no longer working. With hindsight stopping work when husband was not working was probably not ideal, but it had been planned for about two years. I hesitate to use the word 'retire' as it has always been my intention to stop work and have a break, ideally with some time at home, on my own. Now that husband is working I can have that time to myself. Then I shall decide whether or not I miss working enough to want to look for another less demanding job, which does not require me to stand up for eight hours a day or spend several hours a month keeping myself up to date. Or I may decide to keep myself occupied without paid employment. There are several options and possibilities.

Having got husband's job sorted out we decided to have a break from our normal routine and go out for a change. On Wednesday afternoon, last week, we went to Ness Botanic Gardens, where we enjoyed a walk around the garden in the sunshine. Apart from daffodils, camellias and gardening students taking measurements there was not a lot to see but it was good to be out in the fresh air. 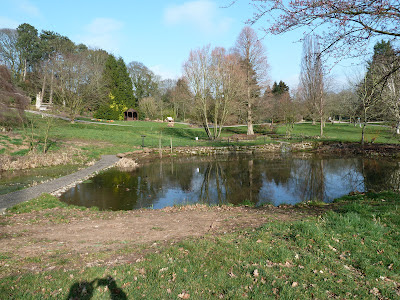 The following day was as dull as could be and we had planned to go to the archives in Dolgellau for husband to do some of his family history research. We had a slow journey there courtesy of road works along several stretches of road. The scenery along the route to Dolgellau from Chester can be stunning but the grey cloud and mist were not doing it any favours last Thursday. Here is a photograph from a previous trip when the weather was better. 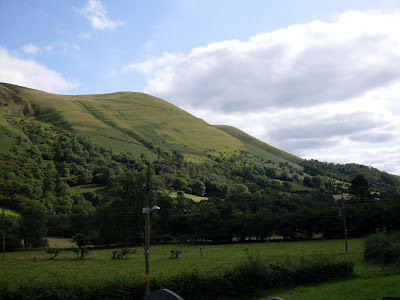 Most of the buildings in Dolgellau are built of grey stone and last Thursday it reminded me of an Austrian ski resort on a bad day.  No snow and no sun. Just grey sky and low cloud or mist clinging to the surrounding hills. Fortunately our session at the archives was very productive. We found the records of the christenings, marriages and burials of several of husband's family going back into the early 19th century.

In the two weeks that have elapsed since the job interview and subsequent job offer I have put off doing several things, thinking that I would do them when husband was back at work. So I now have plenty to keep me busy both in the cottage and in the garden. And from now on I plan to be out in the garden as much as possible. There are some things, however, which can not be put off. My car needs to MOT'd later this week. This morning I had to purchase two new tyres for it, in order to get it through the MOT. So that is this month's pension spent!
Posted by cheshire wife at 20:45

So pleased all is coming right for you again. Good luck and I hope all goes as planned. Take care Diane

What a saga, but it's good you finally have some space and time of your own.

Elisabeth - life does not always run as smoothly as we would like.

I am so happy things have turned out for you two and I believe you will love retirement, but don't stop working that brain...don't let yourself get old, lol...I've enjoyed my retirement but since we are both retired, I sometimes have to slip off for a day on my own and leave him to mind his garden!
Love the photos, now there's a fine job for you right there!
Sandi

Enjoy your time - in between doing the essentials of life!

You've had some ups and downs over the months. Maybe now spring is here - or almost - your days will be angst free. Hope your husband has recovered well from the cataract ops.

I do hope this is the beginning of something wonderful for both of you!

Here's hoping that things run more smoothly for you from now on. Enjoy your gardening.

Glad to hear everything is falling into place now.

Geneology is so interesting. Hubby has been researching for a few years now and has just purchased a new Ancestry Family Tree Programme, which is fabulous. After only a few days of inputting the information he has already it has thrown up some links which have meant he can now trace his ancestors,on his mother's side, back to the 1500s!

Looking back now, I don't know how I found time to work but it is good to have time on your own, I think.
Hope that it is the beginning of something good.
Maggie X

Gaynor - a pity about the esentials!

LindyLouMac - I hope so too.

Akelamalu - your husband is doing well with the family history research.

Maggie May - day two of time to myself and I am already enjoying it.

A brisk walk around Ness last year helped a stubborn first son decide to enter the world from a very tired and pregnant mrs Thud so Ness is on my good list.

Good to hear that your plans may now be realised. I do hope you enjoy your retirement as much as I enjoy mine. A x

Hello:
We have found you quite by chance via Gaynor at La Petite Presse and have been most interested to read your posts. Clearly, the last few months have been incredibly difficult for you both but, at last, things seem to be looking up. We do so hope that this will be the trend from now on.

We visited Ness Gardens many years ago when we lived and gardened in Herefordshire. We found it to be a most interesting place with an amazing collection of wonderful trees. The Magnolias in particular we remember as being glorious.

We have signed ourselves as Followers.

Thud - there are many benefits to a brisk walk.

Jane and Lance - pleased to meet you and thank you for your comment. Last week was too early for the magnolias.

So glad things are steadying at last.

Had you been getting your MOT in Costa Rica you could have approached the men with a lorry full of tyres parked in the carpark of the test centre and arranged to hire tyres to get through the test.

I did not believe what I was seeing!

Its good to hear that everything is finally settling down and a bit of normality is resumed.

I'm glad that your situation has become more favourable. I'm sure you'll find plenty of interesting things to do.

fly - it is frightening the risks that some people will take whe safety should be the most important issue.

Carol - I am not sure about normality but it is different arrangement.

Hilary - I always seem to have plenty to do.