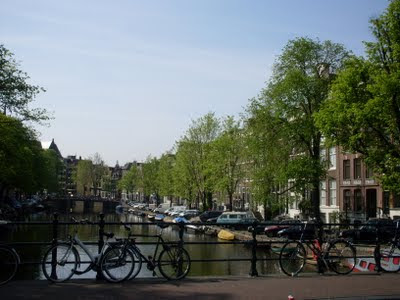 The practice went well. We made it there and back. Nothing was confiscated at the airport, so we got he packing right. However, we have decided to postpone our planned trip to the US as we consider that travelling to and in the US during the Autumn/Fall of the tenth anniversary of 9/11 is too risky, especially when the architect of it all has just come to a sticky end.
Posted by cheshire wife at 19:00

It was a bit unsavoury, wasn't it?
Of course that is what the terrorists want, isn't it? For us all to be too scared to travel.
I'm not keen on air travel anyway and now we wouldn't be able to fly. We have to stick around hospitals.

I also had a trip to Amsterdam a good few years ago and saw the places that you described..... except for Anne Frank's home, that we didn't get to see.

I suppose only time will tell if there will be repercussions because of Bib Laden's death..
Hope not.
Maggie X

I was not at all surprised that they took Bin Laden dead rather than alive....all is not black and white in the so called war on terror.

We had the Turkish builders in when the twin towers went down...the builder and two young assistants, and the two young men could not contain their delight.
Now, they were in no way Muslim fanatics...but they hated America, its policies and the effects of those policies with a fervour.
The boss called them to order, saying that most of those dying in the attack were ordinary people, cleaners, cooks, maintenance staff, typists... and that sobered them up rapidly but one still said that after all the evil America had wrought round the world it was good to see that they were not invulnerable.

I've flown a fair bit since then and passing through America is a pain in the proverbial...and as we once again risk being sent to the slammer for asking for a chair so that my handicapped husband can take off his shoes without falling over I ask myself why these restrictions don't apply to those flying by private 'plane in America.
And I don't like the answer.

Sorry for a gloomy comment, but your post brought it all back to me...those sunny tempered, kind young men rejoicing in the attack on the twin towers.

MM - it is a pity that you missed Anne Frank's house, as it is well worth a visit.

Fly - no need to apologise and you said it. Flying in the US is a pain, that is why we have postponed our trip. It will be even worse if there are more attacks.

What a supewr posting! It makes me very pleased to be back blogging!

As someone who travels with Ryanair I agree that flying certainly isn't fun, but it is often the best way to get around. I don't intend to let the threat of terrorism affect my travelling or any other aspect of my life. I tolerate the restrictions, searches etc, and I do seem to get my carry on bag searched quite regularly, I must look quilty though I never am.

We have just returned from America and I set off every scanner I passed through (my replacement knee joint being the culprit)so was 'patted down' each time! I'm not complaining though, I'd rather the security was tight.

Jan - good to see you back.

Jenny - we have not been put off travelling or flying but we have decided not to travel to the US around the tenth anniversary of 9/11.

Akelamalu - I am all for security but we do not want our holiday spoilt by hassle, uncertainty and delays if there are attacks this Autumn.

I'm sorry you feel unable to travel to the US in the autumn. While understandable, I hate the thought that the terrorists win - even just by you (and countless others) choosing not to do what they want to do, and should be able to freely do.

But you seem to have had your fair share of interesting air travel! Glad you had a lovely break in Amsterdam.

Interesting experiences you have shared in this story. Thanks, CW.

I'm also pleased to know that your holiday in Amsterdam went well.

CW - the decision is made. We are planning to go to France on the ferry in the Autumn, instead of going to the US.

Rob - the trip to the US will probably be next year now and I am afraid that it will be California not Canada. Some other time maybe.

OH, well. Not everybody can have the luxury of coming to Canada!

Next time, perhaps. And I hope you have a wonderful trip to the U.S., and that you will also be able to get the work on our home finished.

Yes, too much work; not enough time. Bears' home is the same.