Christopher Lloyd, or Christo to his friends, was born in 1921 and died on 24 January 2006. After gaining a degree in horticulture, he taught, then wrote gardening columns before writing his many gardening books and maintaining the gardens at Great Dixter, where he lived all his life. He developed a flamboyant gardening style, with a bold use of colour, which was widely admired by many in the gardening world. Today the garden at Great Dixter is in the capable hands of Fergus Garrett, the head gardener appointed by Christopher Lloyd. In September last year Fergus Garrett was the guest speaker at the local horticultural society, that husband and I belong to. He spoke passionately for, one hour, about the garden at Great Dixter with only the aid of slides. He had no notes and there was not one ...um or ...er.

As it was the beginning of May at the time of our visit, I had expected that there would not be much to see in the garden at Great Dixter, but we were pleasantly surprised. The garden was a riot of colour with tulips, alliums, paeonies, honesty, lilac, bergenias, wallflowers and forget me nots all going great guns, and I was pleased to notice that there were even a few weeds!

Having paid our entrance fee, the first area of the garden that we came across was the Sunk Garden with the Barn to the side. (Please click on the photographs to enlarge). 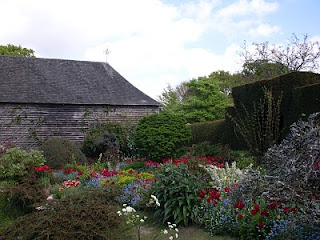 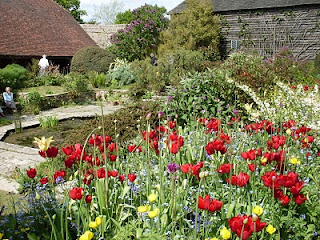 To the side of the Sunk Garden is the Oast House 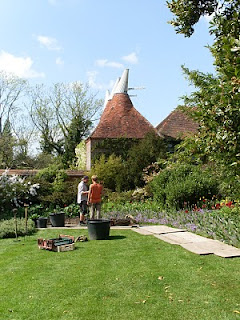 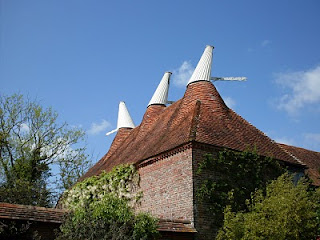 and the Walled Garden. 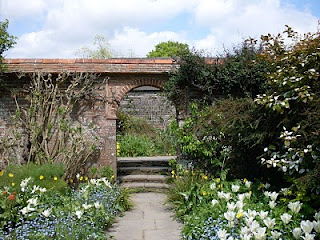 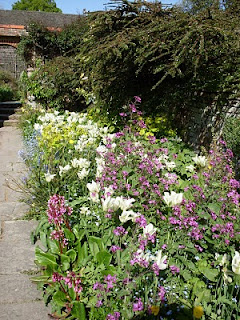 From the Walled Garden we went into the house, parts of which date back to around 1460. The house was extended for Christopher Lloyd's father, by the Edwardian architect Edwin Lutyens. We were only allowed into three rooms in the house and photographs were not permitted. 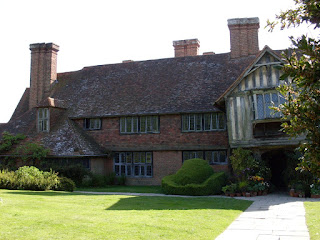 Outside the house and in the garden again, we found ourselves in the Topiary Garden. 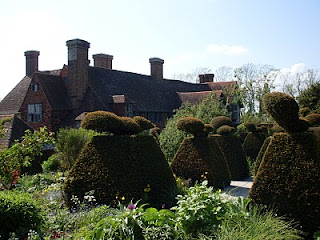 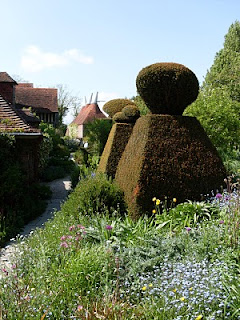 From the Topiary Garden the path took us to the High Garden. 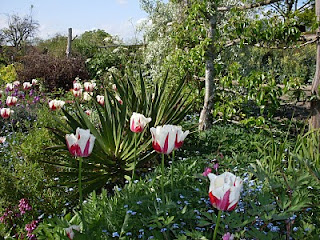 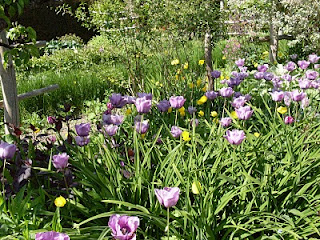 Then we walked through the Orchard Garden, which I do not appear to have photographed,and onto the famous Long Border. 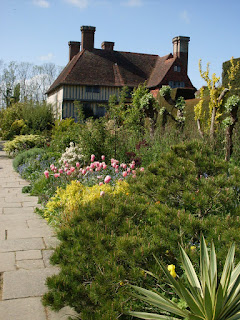 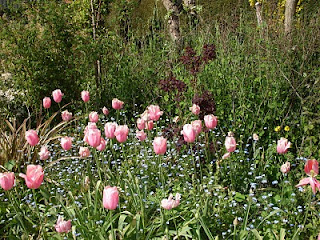 After all that we made our way to the shop where we bought our first ice creams of the year, sat in the sun to eat them and resolved to return at a different time of year to see the garden when other plants would be in flower.


The Great Dixter house and gardens are now run as a charitable trust.
Posted by cheshire wife at 06:00

What a lovely place and you got some fab photos! I love the house. :)

Terrific pictures and gorgeous examples of topiary. I see what you mean by the use of colour ... it makes the gardens so much more interesting.

When I saw the title of your post I thought it was going to be about Christo - the chap who covers lots of things in polythene (like Niagara Falls). This was a lovely surprise

Oh no! I got out done again. I just posted some pictures of my lake house it looks like a shack compared to these.

I can't get enough of these lovely gardens. I want to soak in all the secrets, all the style, all the elements.

A visit here would be right up my alley, just beautiful. Thank you for sharing CW.

How beautiful. As with French Fancy, I at first thought of Christo - whose orange curtain across Rifle Canyon I missed seeing by a couple of hours. The wind whipped it to shreds.

But this, the gardens, the home. I could spend hours wandering.

Beautiful gardens, such a riot of colour. What a lovely day out, one you'll remember always I should think. A x

What a fantastic place. looks like a wonderful day out.
To have the vision for design of both the house and garden is to be marvelled at.
x

BTW Don't know if you'd be interested but I'm a member of a social network called the Spiritual Collective. It's a place for women to share and care. And we need more members. So if you are interested hit the button at the top of my side bar to take you there.

Simply spectacular...Your photography is gorgeous...and what gardens!!!! A true feast for my soul...especially as I am very eager for Spring after this very cold winter!!! What a delightful day you had! I am sure you are looking forward to your return visit!! I know I am!!! ~Janine XO

Beautiful gardens, and lovely photos! That must have been a very special day for you!

Have you read any of his gardening books? They are a real inspiration!

He certainly wasn't afraid to use colour and was probably responsible for me learning to like dahlias which I'd previously considered rather old fashioned. It must be fantastic to create a magnificent garden and leave such a legacy, amazing man.

Thank you for posting such beautiful photos. That house is to die for; I adore period houses like those, from the middle ages Tudor time? Whatever, they are magnificent. And I love wild gardens too.

Thank you, dear CW, for your thoughtful and kind words...I think of you and your mom often...Love you much!! Janine OX

Alex - we don't own this house.

Gilly - yes I have some of Christopher Lloyd's gardening books but have not got beyond looking at the photos! One day I hope to read them.

SS - thank you for your thoughts they are much needed at present.