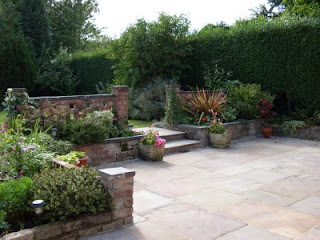 I have decide to re read Pride and Prejudice. I have read it umpteen times before and it is one of my favorite books, but I find that each time that I read it, I take in some incident that I have not appreciated before. As I was dosing off in bed on last Wednesday night, Mrs Bennet was admiring the gravel walk at Netherfield and it set me thinking about our gravel walk which goes through what will be our gravel garden. The patio has now been laid and the gravel garden will be at the side. The flag layer has put down the membrane and the gravel. It is up to us to create the garden. In the mean time we can admire the new sandstone patio.

Last Monday afternoon the flag layer told me that there was one day's work left and he should finish on Tuesday. As it turned out it was one and a half day's work and they did not finish until Friday lunchtime. Tuesday was wet and the patio layers did not turn up because they need a dry day to finish the job. Wednesday was supposed to be wet but wasn't, however, the didn't turn up again. They could not be working anywhere else because all their tools were here. Over the weekend, we had to remove then from the various flowerbeds that they had left them in, so that we could do some gardening. On Thursday morning I was not expecting them, so did not get up early as I have been doing, but was woken up by their arrival and hopefully I got myself up, without them realising that I had been in bed when they arrived. The last I had heard from the Irish flag layer was that he would be coming on Friday as the weather forecast for Friday was good. If he decided to come on Thursday he would let me know. When I got downstairs the first thing that I saw out of the kitchen window, was a shirtless flag layer. Not a pretty sight at eight o'clock in the morning. The shirt was on and off during the day and I noticed that when he was cutting up paving stones he wore a mask and a red bobble hat. He looked a bit like a large garden gnome. I wonder what Mr Darcy would have made of a garden gnome?

You're patio is looking great, its been worth all the grief, even the "giant gnomes!!!"

I agree with Gill, it looks beautiful. I would love a patio like yours. Thanks for stopping by my blog again.

Thanks for the sympathy in the 'doing up the house' thing. Your cottage sounds so beautiful, it'll be worth it in the end. Well, that's what I keep telling myself.

Lovely patio; have fun doing the planting. I've only planted a jasmine alongside mine due to horrendous weather. Will do more in Autumn probably.

It's already Autumn, isn't it? No doubt you'll have some sun to enjoy the patio next year! (Btw, re: P&P, I've never really got over doing it for 'O' level - tried the other Austen's too, but they're all the same. I must be doing something wrong.)

Gill & Denise - thank you for your comments.

WM - thank you for your comment. The cottage is not beautiful yet. I did not expect the renovation to take as long as it is doing. Husband could do with a bomb under him at times.

Dotterel - I think that the Jane Austen problem is a woman thing. Her novels are written from a woman's point of view. I have to admit that I didn't realy get into her books until after I had seen the BBC dramatisation of P&P which was excellent. Also S&S, which was shown earlier this year was very good.

thanks for dropping by and leaving a message...

l love the way blogging is the new diary and that even so we know that likeminded people will drop by...and commiserate or not!

P&P is great read when older...recently l reread Kramer v kramer and watched the film again, and l was amazed at how much my sympathy from the father was now also for the mother, when before it was like anathema to me!! Smae with Mme. de Bovary...l could feel the change palpably!!

drop by again soon....and I really like your blog..l shall return..

Can you get a quick pic next time?!!

A shirtless flag layer could have been good ...

Your garden looks lovely in the photo.

I think he would have approved!!

I guess the flag layer didn't look like the 'Diet Coke Break Guy' without his shirt?

Why DON'T guys like the Diet Coke guy do pavers?!
Congrats on your post of the Day nomination :-)

sorry to bother you, but what is this "post of the day thing" you were talking about????

Can you post a link on my blog please?

akelamalu & imbeingheldhostage - Thank you for your comments. Sadly the flag layer does not look like the 'diet coke break guy'

What a super patio. Did your flag-layer have builder's bum as well?

Is that your home in the photo in the side bar seen from - I can't recall - Teg's Nose?

I love Jane Austen, P&P is not my most favourite though - Persuasion is a belter. And if you are familiar with the Gothic Novel genre, Northanger Abbey is a hoot.
What would Mr Darcy have made of a gnome? Gravel, I suspect.

Liz - the flag layer did not have builder's bum thank goodness. It would have been an awful sight, if he had.

There are no photos of our cottage on my blog. Tegg's Nose is near Macclesfield. We live just outside Chester.

Dottie - I find Persuasion & Northanger Abbey hard going. I must try to read them again.

Your garden looks really pretty, you are doing a fantastic job there, and Cheshire sandstone is such a wonderful colour!